US Pay-TV Losses to Improve Slightly in 2020, Remain Ugly  Analyst

Thanks to an acceleration in cord-cutting, 2019 will go down as an historically ugly year for US pay-TV. And the industry probably won't like what it sees in the mirror in 2020, despite a "slight improvement" in subscriber losses, a top industry analyst predicts.

On the positive side, the horrid losses last year at AT&T, driven by customers rolling off price-locks and other discounted promotions, are expected to taper off a bit in 2020, Michael Nathanson, analyst at MoffettNathanson, explained in a new report issued on Tuesday.

However, losses in subscriber numbers by traditional pay-TV service providers will not be offset by the gains from OTT-delivered, virtual multichannel video programming distributors (vMVPDs), as many of those distributors have been forced to raise prices to make ends meet and to account for rising programming costs.

"At the same time, many traditional distributors (with DirecTV as perhaps the best example) tightened up their credit score thresholds for new customer additions while ending heavy discounting for new subscribers. As such, the number of traditional industry gross subscriber additions dropped like a stone," Nathanson wrote.

Operators have yet to release Q4 2019 results, but MoffettNathanson expects the year to end with a 3.7% rate of decline in overall pay-TV subs (including OTT-TV services), and a drop of a whopping 6.5% among traditional pay-TV distributors. 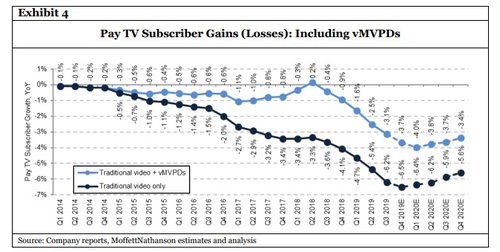 Looking further out, Nathanson sees the compound aggregate growth rate of pay-TV to decline 3.7% by the end of 2023, when there will be about 80 million pay-TV subs (66 million from traditional players and 14 million among vMVPDs). Driven by incremental increases in cord-cutting, he expects the traditional pay-TV subscriber base to decline by a CAGR of 6%, and virtual MVPD subs to grow by a CAGR of 10%. 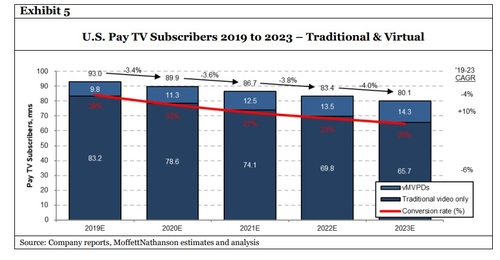 The declines in pay-TV subscribers have also affected the way programmers and media companies are managing their businesses, with many turning to new direct-to-consumer, over-the-top subscription services -- CBS All Access, WarnerMedia's HBO Max, NBCU's Peacock and Disney+ to name but a few.

Within that category, Nathanson raised his estimate on Disney+, the SVoD service launched November 12, 2019. He now expects Disney+ to have 15 million subs by the end of fiscal Q1 (Disney+ had about 10 million out of the chute), and rise to 25 million by the end of Disney's fiscal 2020. But he also sees Disney+ generating losses of about $2 billion in fiscal 2020.