The US Big Four broadcasters have opened another front in their battle with Locast, the startup behind a free service that streams local TV signals in several large US markets.

In their latest move, ABC, NBCUniversal, CBS and Fox have urged a New York court to dismiss recent counterclaims filed by Locast and to instead focus on what the broadcasters claim to be Locast's "wholesale violation of the Copyright Act." 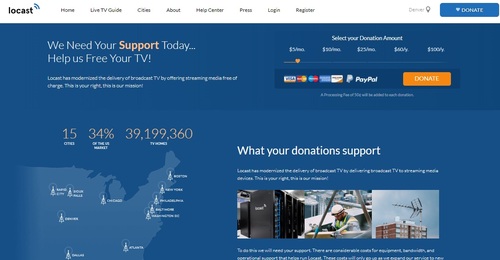 As a non-profit, Locast seeks donations to help the company pay the bills for its technology, infrastructure and ability to expand into new markets. US broadcasters don't buy Locast's position as a consumer do-gooder, believing it has been set up for commercial purposes that benefit it and donors that are fighting against rising broadcast TV retransmission fees.

The motion arrives about a month after Locast filed counterclaims against the broadcasters, arguing that their claims are "objectively baseless and constitute an unlawful sham," while reiterating a position that Locast is a lawful, non-profit entity that provides a public service that is protected by US copyright laws. Locast also alleged that broadcaster-led intimidation caused potential donor RCN to withdraw a plan to make a $750,000 donation to Locast.

"Locast's Counterclaims are nothing more than an attempt to shift focus from Locast's wholesale infringement of the Broadcast Companies' copyrights," the broadcasters said in a motion filed October 28. They also argue that Locast's responses about broadcasting industry antitrust, unfair competition and interference claims "are patently defective as a matter of law and designed to generate discovery burdens."

In a separate letter filed with the US District Court Southern District of New York, the broadcasters also attempt to poke holes in Locast's non-profit-based defense. They claim that the New York state law defense can't defeat federal copyright claims and is therefore nullified.

"Although he reported equal hours worked at both organization... Mr. Goodfriend has simply chosen to allocate 100% of his salary to SFC instead of SFCNY," the broadcasters wrote.

The broadcasters also have an issue with Goodfriend's position as a paid lobbyist and consultant for Dish Network, which, they claim, "seeks to reap a substantial financial windfall from downward pressure it hopes Mr. Goodfriend's Locast service will have on retransmission consent fees."

Boiled down, the Big Four argue that the court should dismiss Locast's counterclaims because, they say, Locast is operating for the commercial benefit of itself, its founder and its financial partners.

Locast has also told the court that it carries debt and has yet to achieve operational cash flow break-even. Locast has previously disclosed a $500,000 donation from AT&T and a loan from IoT Broadband for $800,000. And while the Locast service is free, Locast does encourage consumers to pay a monthly donation.

Locast debuted in New York City in January 2018. The broadcasters filed suit against Locast in July 2019.

Philkirk7 10/29/2019 | 5:16:58 PM
Locast should be allowed to continue Broadcasters continue to not promote their over the air signal because of the retransmission fees they get from cable and OTT ( aka paid for by the subscribers)

My guess is that very few stations have ever done an informercial on ways to watch free tv except when cable companies threaten to pull the signal.