Looking to generate some buzz of its own amid the frenzy of recently launched subscription VoD services from Disney and Apple, Tubi has kicked off an ad campaign that shines some light on its category in the so-called "streaming wars" -- free, ad-supported VoD.

And the campaign's primary theme -- TV shows and movies that are "Not On Netflix" -- also takes a less-than-subtle jab at another SVoD giant. 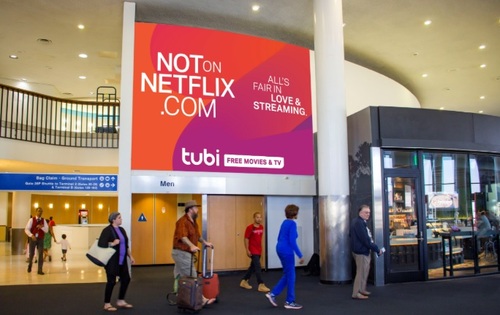 The billboard element of Tubi's ad campaign is focused on New York and Los Angeles, including airports such as JFK and LAX. Pictured is a billboard mock-up for LAX.

"Timing-wise, it's the perfect time to be talking about free AVoD as we... are in the throes of the streaming wars," Emily Jordan, Tubi's head of marketing, said, noting that the campaign partly pokes fun at the notion of "platform polygamy," with celebs participating in the campaign admitting to finding someone new to fulfill their streaming desires.

And while Tubi, which touts a library of about 15,000 movies and TV shows, views itself as a "complement" to Netflix, Jordan said the campaign and the attempt to generate more awareness of Tubi's free OTT service are also trying to seize upon "subscription fatigue" that could set in as consumers grapple with a growing batch of general entertainment SVoD services. That group that includes Hulu, Amazon Prime Video, Netflix, CBS All Access, Disney+ and Apple TV+. Meanwhile, two more -- WarnerMedia's HBO Max and NBCU's Peacock -- are set to debut in the first half of 2020.

"We really want to be the prescription for that subscription fatigue," Jordan said.

"Our focus has really been on platforms and channels where our viewer and our target audience are, so that's what's driven our media channel selection to date," Jordan said.

She said it's too early to judge the effectiveness of the campaign. However, Tubi, which undertook a smaller marketing campaign in August, has seen a rise in usage -- from about 94 million hours of view time in June to roughly 132 million hours today. Tubi also announced in June that the service had surpassed 20 million active users, but hasn't updated that number since.

Tubi has raised about $35 million and counts MGM and Lionsgate among its backers. In January, the company said it expected to spend "9 figures" on content acquisition in 2019. And while retail streaming platforms has been Tubi's primary focus, it has extended its reach into the pay-TV world, notably an integration with Comcast's X1 platform.