Ownership of media and video companies seemed like a good idea for most telcos as recently as 2018. Not so last year. Light Reading carried out a survey asking the industry if telcos should buy assets in this market: In 2018, more than half of respondents said yes, but a year later the figure was down to just 37%.

What explains this weakening of sentiment? AT&T's initial experiences as the parent of Time Warner, the media giant it bought for $85 billion in 2018, may bear some responsibility. While it remains too early to pass a verdict on that deal, there have been few obvious benefits so far. 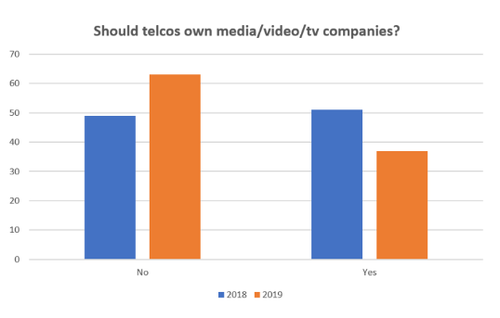 Coming only three years after AT&T's $67 billion takeover of DirecTV, another video business, the Time Warner deal has loaded further debt onto AT&T's balance sheet, for one thing. Total debts have soared from just $82 billion in 2014 to about $176.5 billion last year. At the end of September, the US operator had net debts of $158.6 billion, nearly 2.7 times its annual earnings. Even some of Europe's debt-burdened operators look in better shape.

The debt situation is awkward in a market where AT&T faces sustained competition from T-Mobile, a mobile operator hoovering up customers, as well as big investments in 5G, a hyped new mobile technology. In the last September-ending quarter, it lost 326,000 lucrative postpaid customers, and the number was down more than 1 million compared with the year-earlier quarter. Cut prices and markets may panic about AT&T's ability to pay off debts: Keep them high and more customers may defect.

It's not just the mobile business that is suffering, either. Despite the Time Warner takeover, AT&T's video business is on a downer. In September 2017, AT&T was able to count more than 25 million video connections. Two years later that figure had dropped to about 21.6 million. The young over-the-top business peaked in September 2018, with 1.86 million customers: It finished last September with 1.1 million.

And then there's the WarnerMedia business itself, as Time Warner is today called. Under its new management, sales fell 4% year-on-year in the September-ending quarter, to about $7.8 billion. There have been some questionable moves by John Stankey, WarnerMedia's boss, since the deal was finalized. In July 2018, notably, Stankey was reported to have urged executives at the award-winning HBO to prioritize quantity over quality in what seemed like a move to replicate the Netflix approach to content. Creative types were aghast.

In the meantime, video competition has been growing. Netflix has slowed down in the US, growing by just 520,000 paid memberships in the recent third quarter, to about 60.6 million. But AT&T also now has Apple, Disney and Amazon as major video-streaming rivals. The Amazon Prime service, which bundles video with ecommerce services, has more than 100 million customers in the US market, according to press reports. Disney announced more than 10 million customers in November a day after launching its Disney+ service: Apple is throwing money at lavish shows in a bid to compete.

It's not as if there is an outstanding telco success story in the media space to buoy hopes. Verizon, AT&T's number-one rival, has also been floundering. While avoiding the enormous investments made by AT&T, it bought AOL for about $4.4 billion in mid-2015 and added Yahoo to its media empire two years later for another $4.5 billion. But the Verizon Media Group, which today accounts for all the media assets, made just $1.8 billion in revenues in its recent third quarter, and the figure was 2% less than it generated a year earlier.

Diversification into other sectors looks increasingly problematic. Light Reading also asked its audience if telcos should become banks and only 12% said yes, despite the high-profile expansion into the banking sector by companies such as France's Orange and Russia's MTS in recent years. Banking is even less convincing than media to Light Reading's respondents.

Again, it remains too early to pass a verdict on some of these moves, but MTS reported a 38% year-on-year increase in banking revenues for its recent third quarter, to 7.6 billion Russian rubles ($120 million), and Orange insists it is off to a positive start in this market. It now has about half a million customers in France and is targeting 5 million across Europe, plus around 400 million ($444 million) in net banking income, by the end of 2023.

On top of this, banking would seem like a more natural fit for companies used to processing millions of individual transactions and managing customer relations. So why the indifference? It is quite possibly because media is still seen as a more exciting place to be. Your average telco executive probably spent his formative years watching superhero films while dressed in his own Christopher Reeve-style spandex outfit, and he now dreams of producing a blockbuster hit like Game of Thrones. Advising customers on mortgage matters just doesn't measure up. 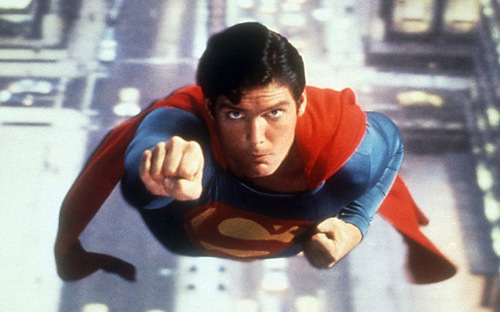 The late Christopher Reeve is likely to have been an idol for many of today's telecom executives growing up in the late 70s and 80s.