The so-called "streaming wars" are in their early stages as a wave of new OTT-delivered services make their way to the front. But new subscription offerings such as Disney+ and Apple TV+ have yet to inflict much damage on Netflix and others holding the high ground, a new study finds.

While Disney+, which launched on November 12, has quickly jumped out to an "astonishing" 23% of streaming households (roughly 20 million households), Netflix's penetration remained steady throughout 2019 while the penetration rates for both Hulu and Amazon Prime grew about 6%, according to a new joint study from MoffettNathanson and HarrisX using data derived from almost 19,000 respondents between October and December 2019. Plus, almost 90% of Disney+ customers also take Netflix, the study found.

Meanwhile, Apple TV+, which launched on November 1 with a more limited library, is not off to a super start despite a big marketing push. Apple TV+ is being streamed in just 5% of US streaming households, the study found. 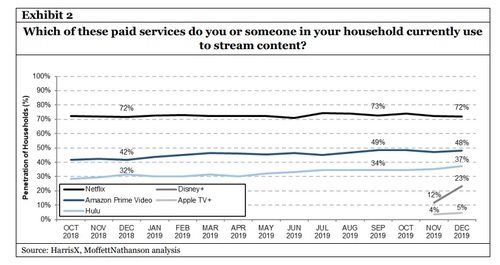 Despite the difference in the early success levels of Disney+ and Apple TV+, the data indicates that new, premium streaming services are more complementary than directly competitive, at least at this early phase.

"The data clearly shows that the 4Q 2019 launches of both Disney+ and Apple TV+ DID NOT immediately inflict significant damage to the streaming market structure," Michael Nathanson, analyst with MoffettNathanson, wrote in the firm's latest SVOD Tracker, issued Friday. 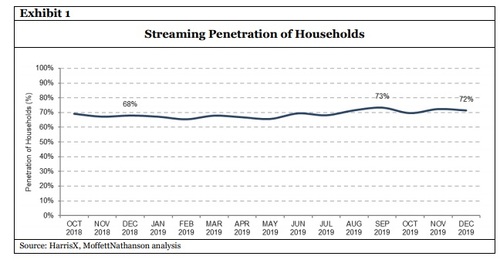 And he expects much of the same as streaming services like NBCU's Peacock, which will lean more heavily on ad-based tiers, and HBO Max enter the fray. "We believe that the new entrants of SVOD and AVOD platforms will have a more subtle impact" on the overall streaming market, Nathanson wrote.

As for the specific impacts, he sees these new entrants being forced to bulk up marketing spend so they can "break through the clutter," and splash lots of cash on expensive originals such as what Disney+ is doing with The Mandalorian and Apple TV+ is with series such as The Morning Show.

But he likewise doesn't believe these new services and their initial slate of exclusive originals will cause Netflix subs to churn in droves. In fact, Nathanson expects Netflix to announce paid net adds of 618,000, 3% above guidance, when it reports Q4 2019 numbers on Tuesday (January 21), citing Netflix's strong content slate and heavy marketing push in the period.