PS Vue, launched in March 2015, is going dark today, a shutdown that comes roughly three months after Sony announced intentions to scuttle the service on Jan. 30, so it could instead "focus on its core gaming business."

The actual reasons for Sony's decision, of course, go much deeper than that. Sony also lamented the high price of content and network deals and a pay-TV industry that has changed more slowly than expected.

PS Vue reportedly managed to snap up just 500,000 subscribers in nearly five years (some estimates put that total at closer to 800,000), well below what Sling TV, Hulu and other OTT-delivered pay-TV services have been able to scare up. Sony was also fighting a trend in which a subset of consumers are leaving linear TV altogether, instead opting to use their entertainment dollars to cobble together a blend of subscription VoD services.

And while PS Vue could've used a stronger marketing plan, it's also pretty plain that Sony's patience in running an expensive pay-TV service that had trouble gaining significant traction with consumers had simply run out. 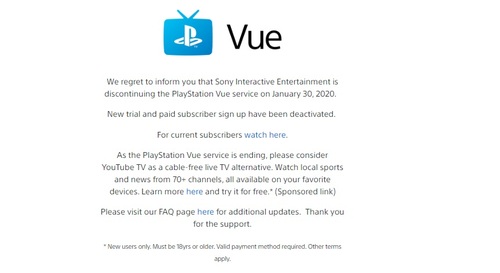 PlayStation Vue provided a sponsored link to YouTube TV to help customers find a new OTT-TV as the Sony-owned service was nearing shutdown.

It's also not clear how profitable PS Vue was since Sony never reported financials for the streaming service. But in the months leading to its launch in March 2015, there were multiple reports that Sony had to pay an extraordinarily high rate card for programming given that it was forced to negotiate carriage deals based on a then non-existent subscriber base. Those rates might have improved as it gained customers, but it's highly unlikely that it ever got near the rate cards that major US pay-TV have. Industry watchers might remember that the high costs of building an OTT-TV service was one of the primary reasons why Microsoft balked at the idea several years ago.

Plus, PS Vue, like other virtual MVPDs that were living on the edge of product margins early on, was forced to raise prices from time to time, eliminating one of the key reasons that some OTT-TV options were attractive to consumers in the first place.

Although PS Vue had tens of millions of US PlayStation users to sell to, the service also had to fight a perception that consumers needed a Sony-made console to get the service. While that was largely true when the service launched, PS Vue eventually extended support to several popular, third-party streaming platforms, including iOS and Android, web browsers, Roku players and TVs, Amazon Fire TV devices, Apple TV boxes, Android TV players and Chromecast streaming adapters.

PS Vue customers did seem to like the service and stick with it, as it was viewed as one of the most technically stable in the vMVPD arena. While some of that was owed to PS Vue's reliance on BAMTech (now Disney Streaming Services), Sony was also paying a premium price for use of that platform, according to two industry sources.

So, what now?
When Sony announced it would be shutting down PS Vue, it was reportedly interested in selling its subscriber base to another OTT-TV service provider. As of this writing, it appears Sony was unable to pull that off. However, the PS Vue page (as of January 30) provides an option in the form of a sponsored link to YouTube TV, a service that shares channel lineups most similar to PS Vue's among the virtual MVPD options. Also of note: Sony recently started to support YouTube TV on the PS 4 console.

Sling TV also got into the act today, announcing a set of deals amid the demise of PS Vue that include $10 discounts on the first month of service, a free Amazon Fire TV Stick or free over-the-air antenna with two pre-paid months of Sling TV, or an AirTV Mini, AirTV 2 and OTA antenna bundle for $99 (discounted from a regular value of $225) with three prepaid months of Sling TV.

And, depending on their needs, former PS Vue customers have several other OTT-TV options, including fuboTV, Hulu, Philo and Vidgo.

As PS Vue was nearing its end, customers paid their last respects via Twitter. Here's a smattering of examples:

Watching #PlaystationVue one last time, because I still can. RIP, Vue.

Very impressed with @YouTubeTV so far but Ill always remember you #PlaystationVue. #YouNeverForgetYourFirst

Gonna miss using my #PlaystationVue 😭😩. I guess its onto #YoutubeTv

Mourning the loss of my beloved @PlayStation Vue!! I found it on accident on my PS3 years ago! Shame the marketing was sh*t for it bc it was a great platform & amazing product. Had to explain to ppl you didnt need a PS system to use it. Coulda been #1 #PlayStationVue

Like what we have to say? Click here to sign up to our daily newsletter
COMMENTS
Newest First | Oldest First | Threaded View
Add Comment
Be the first to post a comment regarding this story.
EDUCATIONAL RESOURCES
sponsor supplied content
The VOD Factor
Just You, Me and the TV: Shifting to a Direct Customer Relationship Model
Video to the CDNth Degree: Multi-CDN Delivery Optimized for Big Video
Educational Resources Archive
More Blogs from The Bauminator
Kimberly Maki lends SCTE a helping hand