PlayStation Vue to Shut Down

One of the first virtual multichannel video programing distributors (MVPDs) is also the first one to throw in the towel.

PlayStation Vue, the OTT-TV offering launched by Sony in 2015, announced Tuesday that the service will be shut down on January 30, 2020. Sony, which reportedly was seeking a buyer of its struggling PS Vue unit, reasoned that it would scuttle the pay-TV service so it could instead "focus on its core gaming business." 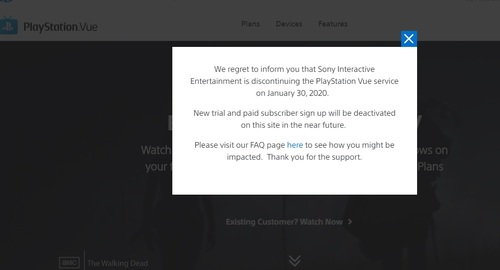 The PlayStation Vue website greets visitors with this grim message.

"Unfortunately, the highly competitive Pay TV industry, with expensive content and network deals, has been slower to change than we expected. Because of this, we have decided to remain focused on our core gaming business," John Kodera, deputy president for Sony Interactive Entertainment, explained in this blog post. "We are very proud of what PlayStation Vue was able to accomplish. We had ambitious goals for how our service could change how people watch TV, showcasing PlayStation's ability to innovate in a brand-new category within the Pay TV industry."

Though Sony is shutting down its multichannel TV service, the company will continue to distribute individual movies and TV shows via the PlayStation Store.

Sony never announced customer numbers for PS Vue, but The Information reported earlier this month that it was able to scratch out about 500,000 subs and was not profitable. Sony sold PS Vue direct to consumers for the most part, though it did attempt to work with smaller, independent cable operators via an agreement with the National Cable Television Cooperative. The idea in that deal, announced in November 2017, was to create a way for cable operators to market PS Vue to their broadband-only subs and still retain a video relationship with those customers.

Affected PS Vue subs still have plenty of other OTT-TV options to turn to, including YouTube TV, fuboTV, Hulu, Vidgo, Sling TV, Philo and AT&T TV Now, though programming packages and pricing among them is not uniform.

Why this matters
PS Vue is the first major casualty among US virtual MVPDs. But it likely will not be the last as the domestic pay-TV market continues to decline alongside surging programming costs that cut deeper and deeper into service margins.

A thorny issue for all virtual MVPDs is that their small subscriber bases have made it difficult for them to cut attractive deals with programmers that could result in pay-TV packages that aren't saddled with razor-thin margins. That Sony, a major media company with deep pockets, couldn't be successful in this environment is not a good sign for other OTT-TV providers that are also struggling to gain subscriber scale and produce profits.

PS Vue's exit also comes about as demand for traditional live TV continues to wane while new subscription VOD services from major media players such as Disney (Disney+), WarnerMedia (HBO Max), Apple (Apple TV+) and NBCUniversal (Peacock) enter the market and attack a streaming model that has been successful for companies such as Netflix and Amazon.

Jeff Baumgartner 10/29/2019 | 5:59:53 PM
The Irony So, Sony announces that PS Vue is going to die on the same day that WarnerMedia is going to reveal many more details about HBO Max...