Xumo has jumped in to clarify some details reported by Cheddar today that T-Mobile was working with the streaming company on a free, ad-supported mobile TV service that would come pre-installed on a selection of smartphones.

As Cheddar reported it, T-Mobile US Inc. , via the Denver-based Layer 3 TV unit it acquired last year, had licensed Xumo's technology to provide a free, ad-supported OTT TV and VoD service that shared similarities with AT&T's Watch TV service and Verizon's now-dead go90 offering, and would be offered on "several T-Mobile devices, including some Samsung phones." (See T-Mobile Forming 'Wireless First' TV Strategy and T-Mobile Promises 'A Lot of Firsts' for New OTT TV Service.)

Xumo tweeted this afternoon that Cheddar didn't have all the details quite right:

Not quite. Were working with Metro by T-Mobile on a snackable content app launching on two phones next month. https://t.co/ptAiWAyZ3g

A T-Mobile official has since vouched for the way Xumo characterized how this new offering will come together.

The service in mind indeed appears to be free and ad-based, but a lot smaller in terms of size and scope, and with Metro, the prepaid service from T-Mobile that was formerly known as MetroPCS. How Xumo explained it sounds nothing like AT&T Watch TV, a sports-free skinny bundle that's being offered for free to AT&T mobile subs and for $15 per month as a standalone service. (See T-Mobile Rebrands MetroPCS.)

Still, this "snackable" video arrangement does appear to deepen the ties between T-Mobile and Xumo, an OTT service that provides access to a broad array of ad-based streaming channels (including Cheddar) on several smart TV platforms, Web browsers and mobile platforms. Back in 2017 prior to getting acquired by T-Mobile, Layer3 TV struck up a deal to integrate Xumo on set-top boxes for its in-home pay-TV service. At the time, Layer3 TV was the first MVPD to integrate Xumo on the set-top box. 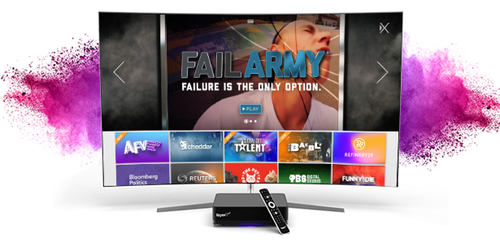 Via a deal struck before getting acquired by T-Mobile, Layer3 TV has integrated Xumo's lineup of OTT-delivered video channels on its in-home set-top box platform.

The latest round of speculation surfaced today as T-Mobile's grander strategy around video and pay-TV continues to form.

That plan includes a national OTT pay-TV service that was originally expected to launch in late 2018, but delayed into some time in the first half of this year in part because T-Mobile has some other, bigger priorities to handle  its 5G deployment and its pending merger with Sprint Corp. (NYSE: S). People familiar with that situation indicated late last year that the launch date for T-Mobile's national OTT-TV service could happen as early as February 2019. (See T-Mobile Dumps Plan to Debut New OTT-TV Service in 2018  Report and T-Mobile buys Layer3 TV, plans OTT launch.)