Roku Commits to IPO as It Takes on TV Titans

Frenemies
Indeed, for all its content neutrality, Roku now finds itself in a technology battle with some of its own content partners. Both Amazon and Google (Nasdaq: GOOG), for example, offer products that compete with Roku's streaming players, the company acknowledges in its SEC filing. Some TV makers are also going down this road.

Roku is also heavily dependent on a small number of publishers for most of the content that users stream on its platform. Its top five channels accounted for nearly 70% of the total hours streamed in the first six months of the year, with Netflix alone responsible for a third of the total.

While a deal with Netflix will soon be up for renewal, Roku downplays the importance of the Internet giant in its SEC filing. "Although Netflix is the largest provider of content across our platform, revenue generated from Netflix was not material to our overall revenue during the six months ended June 30, 2017, and we do not expect revenue from Netflix to be material to our operating results for the foreseeable future," it says.

Like other technology companies that have recently courted the markets, Roku has not yet turned a profit, even if it is moving in the right direction. In the first half of this year, its net loss narrowed to about $21.2 million, from $32.6 million a year earlier. Roku's gross margin also rose from 31% to 38% during the same period. 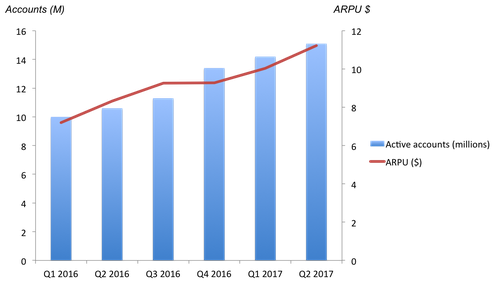 But these improvements may have taken their toll elsewhere. Just 14% of revenues were reinvested in sales and marketing in the first six months of this year, down from 16% a year earlier. And while Roku maintained spending on research and development at about 24% of sales over the same period, its R&D bill is rising, it points out in its SEC filing. IPO proceeds could be used to support both R&D and sales and marketing activities, says the company.

To satisfy investors, Roku will have to keep showing growth in accounts, hours streamed and average revenue per user (ARPU), measured as platform revenues divided by active accounts. Recently, the story has been very positive. The number of active accounts rose from about 10.5 million in June 2016 to about 15.1 million a year later, with total hours streamed up from 4.2 billion in the first six months of 2016 to 6.7 billion in the same part of 2017. And annual ARPU has soared from $8.32 to $11.22 over the same period.

But Roku's lofty ambition will have analysts monitoring those metrics for continued improvements. "Our mission is to be the TV streaming platform that connects the entire TV ecosystem," said Anthony Wood, Roku's CEO, in a letter accompanying its SEC filling. The IPO will be an indication of just how confident investors are that Roku can get close to that target.

kq4ym 9/15/2017 | 4:17:26 PM
Re: It's All About Being Neutral I've been a happy Roku user for years after shutting down satellite and later cable service here in SW Florida. You can't beat it for cost (free for most everything) and convenience, with it's easy to use interface.

I was surprised that most if it's income as noted were " 59% of the company's total revenues of $199.7 million." I would think getting those tv set makers aboard from a Roku license and increasing ad revenue might increase over time. Those Roku ready TV sets are highly recommended as well if you're in the market for a new set.

Smoochy18 9/6/2017 | 1:12:56 PM
It's All About Being Neutral I can tell you that we've seen a clear pattern with our customers, who are cord cutters. For those who start out using a competing device like Fire TV, Apple TV or Chromecast (which don't allow access to competitor's services), they eventually switch to Roku. Roku's neutral position makes it the best value for consumers and as long as they stay that way they will continue to outpace the competition.
Reply | Post Message | MESSAGES LIST | START A BOARD

The question really is:  Why would you move away from Roku given they have the most viewers?