LAS VEGAS -- NAB 2019 -- OTT-delivered TV services have met or surpassed the experience of traditional TV services in areas such as device availability, navigation and content lineups. But they remain far behind -- literally -- in the time delays between the source feed of a live TV broadcast and the moment when a streaming video sub sees that broadcast finally appear on-screen.

While that OTT-TV latency gap varies and drifts widely between the individual streaming services, the delay between the OTT feed and the actual live feed is typically in the range of 30 seconds to a minute, 90 seconds... or even more.

That latency gap isn't a huge deal for a lot of TV programming. But it does become an issue with live sports and increasingly popular esports events, as well as the big, secretive reveals that appear in the finales of popular TV series. If a viewer of an OTT-TV service happens to be keeping tabs of a big game on the Twitter feed alongside the live broadcast, it's very possible that he or she will learn of key results or other surprises before they show up on-screen. 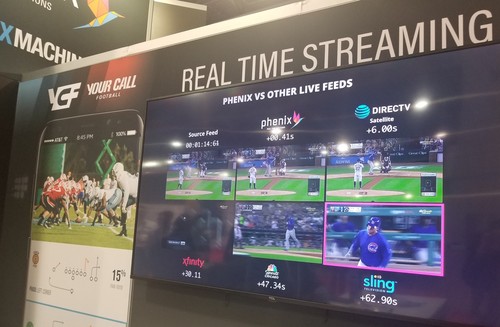 Phenix claims it can chop the latency of a live OTT-TV feed down to half a second.

This was not viewed as a major problem in the OTT-TV market when only a small number of consumers used those services and most streaming offerings were restricted to shows and movies being watched on-demand. But it is becoming a more prominent issue (and focus for vendors) now that the OTT delivery of live TV services has become increasingly commonplace, and the number of people who subscribe to virtual MVPD services has begun to scale as those services reach a wider, mainstream audience extending well beyond a small batch of tech-savvy early adopters. MoffettNathanson, for example, sees the US virtual MVPD sector growing from about 7.55 million subs at the end of 2018 to more than 30 million by the end of 2023.

Based on what was being demonstrated and discussed here this week, it appears that the latency gap between OTT-TV and regular broadcast TV is closing fast. Some vendors in the video processing market are keying on delays of about six seconds (in the neighborhood of what one would see with cable or satellite TV), while another vendor has already built and deployed a platform that, it claims, can reduce the delay to a mere half a second.

Among those focused on the latter example is Phenix, a company that has endeavored to streamline and rework the entire streaming workflow from the encoder to the viewer's device, eliminating bits of time from each link in the chain. The company essentially bills itself as a content delivery network that has been engineered and optimized for live, latency-sensitive content and apps.

At its baseline, Phenix uses a software-based encoder in the cloud (it also has an on-premises version) that is optimized to encode the video very quickly (in about 120 milliseconds) before sending it along to a private fiber network through partners that include Google, Oracle and another company that Phenix has yet to identify. Those connections come with service-level agreements that adhere to Phenix's low-latency and jitter requirements, explained Jeff Huppertz, Phenix's SVP of business development and strategy. He adds that, out at the edge, Phenix teams the WebRTC protocol with an adaptive-bit-rate output that determines the quality of the final stream based on the quality of the end user's broadband connection.

At this stage, Phenix supports web browsers and has developed software development kits for both IoS and Android.

Huppertz said Phenix is in talks with multiple virtual MVPDs about using its platform. "They know [latency] is an issue," he said, noting that a growing number of people who are switching to OTT-delivered service want an experience that is more TV-like and are less forgiving about massive latency gaps.

Most of Phenix's customers are outside the US, but, of recent note, ABC used Phenix to live-stream video in tandem with a game that called on viewers to predict Oscar winners. Cox Enterprises, meanwhile, has teamed with Phenix for live car auctions to ensure that there is near-live synchronization between the on-location and online bidders.

Others trying to bridge the gap
Phenix isn't the only one trying to lick the OTT latency issue.

At NAB, Synamedia, the company formed via last year's acquisition of Cisco's video software and security group, showed off OTT live feeds within about six seconds of the source feed.

Julien Signes, the newly named SVP and GM of Synamedia's video processing unit, stressed that the company achieved it by optimizing the system at multiple points -- at the encoder, out on the CDN, and down to the player (Synamedia's own player or one from a third party that has been integrated) on the user's end device.

"It's not one solution, but a combination" of elements, he said, noting that one part of the chain involves squeezing down the "chunks" in an adaptive-bit-rate stream and delivering the content in fewer frames. "It's feasible," he said of the six-second delay target, "but you have to control the whole chain."

Synamedia has this capability in trials today with some service providers, and expects to have some commercial installations by the second half of the year, Signes said.

Here at the show, Harmonic also touted efforts around closing the OTT latency gap, holding that it is getting it down to five to eight seconds, relatively close to a traditional broadcast TV feed. It's achieving that in part by reducing the size of the segments making up an adaptive-bit-rate stream and using the Common Media Application Format (CMAF), according to Eric Gallier, VP of video product management.

CMAF and its focus on a more efficient media file format standard came way of an original collaboration between Microsoft and Apple.

Red Bee Media, meanwhile, announced "record low latency" of its live OTT feed at NAB, reaching down to 3.5 seconds "glass to glass" on Tuesday (April 9), down from a 10-second latency demonstrated on Monday. The company said it achieved that feat, which featured a live feed from the NAB show floor to Red Bee's cloud in Europe, using commoditized cloud-based, open source standard technology -- namely the SRT transport protocol and "chunked CMAF."

But there are tradeoffs between how Phenix and the others are tackling the OTT latency issue. Phenix's super-quick encode does help to cut down on latency significantly. But the overall video image quality -- while still in HD -- will not be as good as what's achieved by the approaches being taken by some of the market's traditional encoder suppliers, Huppertz acknowledged.