Adding another OTT option to its X1 set-top platform, Comcast has integrated Tubi, a free, ad-supported service that features a library of about 8,500 movies and TV shows.

Tubi, which launched in the US in 2014 and supports most major mobile and OTT streaming platforms, is getting rolled out to Comcast X1 boxes (about 60% of Comcast's residential video subscriber base is on X1) starting today.

"We want to make Tubi accessible to everyone; that's our mission," Tubi founder and CEO Farhad Massoudi, said in a recent interview. "Partnering with the largest cable company in the US is an incredible opportunity for us." 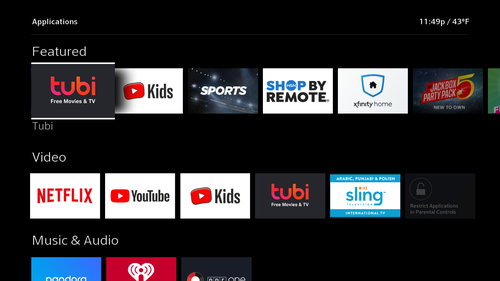 The free, ad-based Tubi service joins a curated blend of other OTT apps that have been integrated with Comcast's X1 platform.

Tubi's business model is based on advertising, putting it in competition with streaming services such as Sony Corp. (NYSE: SNE)'s Crackle, Pluto TV and Vudu, which offers a mix of free titles alongside movies and TV shows that can be bought or rented. Tubi's average hourly ad load is about four to five minutes, compared to the 16 to 20 minutes of ads per hour that's common among traditional TV programmers.

Tubi and Comcast aren't talking about the financial terms of the agreement, but it's likely that Comcast is getting a piece of the advertising action for Tubi viewing on X1. Of note, Tubi is already connected to many of the major online advertising video mediation systems, including Comcast-owned Freewheel.

Massoudi said that the ML system has played a critical role in a 20x growth in viewership since 2016.

Tubi streams in HD today but has yet to introduce a 4K library. "It will come... it's a matter of time," Massoudi explained.

San Francisco-based Tubi has raised about $35 million, with financial backers that include Lionsgate, MGM, Paramount and Tegna, the Virginia-based broadcast television and digital media company.