AT&T Wants to Ditch the Dish

Oh the irony. A mere two years after AT&T closed on its acquisition of DirecTV, the telco is now racing to replace the satellite distribution system with a new over-the-top video delivery platform.

This initiative isn't the same as the DirecTV Now service, or at least not exactly. Where DirecTV Now is aimed at mobile subscribers, the latest OTT service is being designed for in-home viewing with a combination of new thin-client hardware and whatever home broadband connection a consumer wants to use.

AT&T Inc. (NYSE: T) CEO Randall Stephenson announced the company's latest OTT plans at this week's annual Goldman Sachs Communacopia conference. He emphasized the benefits of delivering TV as a software-based service, noting that the cost of customer acquisition should drop dramatically (no satellite dish to install), and that with the right platform in place, AT&T should be able to provision a wide variety of video offerings for different audiences. These could include basic content packages, but also premium bundles with features like DirecTV's NFL Sunday Ticket service and access to 4K Ultra HD networks. 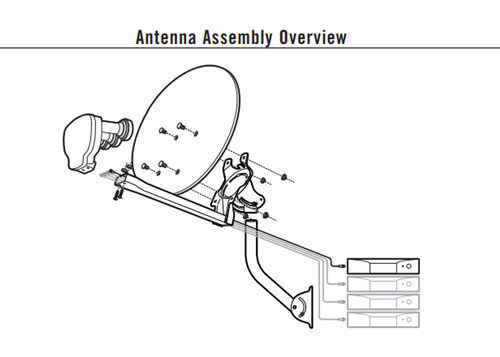 Dish installation requires a manual, and nobody wants that.

From the Seeking Alpha transcript of his remarks: "We are developing this very, very quickly, taking DIRECTV Now and leveraging it into a scalable platform that goes into the home as the primary service. We are launching a beta of this in the fourth quarter of this year. And you will see us begin to roll the service out as we get into 2018."

The odd thing about AT&T's new OTT initiative is that it's not clear what it offers that DirecTV Now doesn't already provide. Users can already watch DirecTV Now content on a TV using devices like the Roku and Amazon Fire TV. And AT&T isn't promising some fancy new hardware with optimizations for video streaming. If anything, a thin-client box from the telco would represent a step backward from retail alternatives because in addition to being a dumb terminal, it would presumably only offer a walled garden of content.

Then there's the fact that AT&T already has millions of DirecTV satellite dishes out in the field. Stephenson hasn't suggested that AT&T will try to replace those overnight, but investing in separate in-home hardware is still an expense that the current DirecTV Now offering doesn't require.

Where Stephenson does begin to make sense on the OTT front is in his vision of using a cloud-based platform to segment the TV experience based on what different consumers want to watch. The cloud, as so many have discovered, gives TV providers tremendous flexibility to introduce new services and also quickly tailor those offerings by content, price and add-on features.

Stephenson also touts the financial benefits of offering addressable advertising as more of the industry ecosystem moves to IP and software-based management systems. The new OTT platform is only part of that wave, but given the amount of ad inventory AT&T has to sell -- currently pegged by Stephenson at 200 billion impressions, with room to grow to close to 1 trillion impressions if the Time Warner deal closes -- the telco has every reason to chivvy the addressable advertising trend along as quickly as possible.

And shifting more customers from satellite networks to IP-based TV should do just that.

KBode 9/30/2017 | 2:10:07 PM
Re: Not sure about the ditching partphen Yeah I don't see either satellite TV service from Dish or DirecTV surviving the arrival of 5G, and all the bundled video services companies like AT&T and Verizon intend to include with them.
Reply | Post Message | MESSAGES LIST | START A BOARD

kq4ym 9/26/2017 | 12:51:31 PM
Re: Not sure about the ditching part Even with millions of dishes out there, it does seem to be a kind of antiquated delivery system. I stopped subscribing years ago although there's still a dish attached to my roof and I get at least weekly advertisements in the mail to come back aboard.
Reply | Post Message | MESSAGES LIST | START A BOARD

KBode 9/18/2017 | 11:58:35 AM
Re: Not sure about the ditching part You mean DirecTV right? AT&T has the rights to that, I see no reason why they couldn't turn it into a very lucrative over the top streaming platform aimed at both wireless and out-of-footprint fixed-line broadband subscribers. With net neutrality rules facing the axe, I'm sure AT&T sees all sorts of creative possibilities with these platforms down the line.
Reply | Post Message | MESSAGES LIST | START A BOARD

Phil_Britt 9/18/2017 | 10:37:55 AM
Re: Not sure about the ditching part Dish will be a viable offering as long as it has NFL ticket. If that goes away, Dish will provide little value compared to OTT.
Reply | Post Message | MESSAGES LIST | START A BOARD

KBode 9/14/2017 | 5:39:51 PM
Re: Not sure about the ditching part "I agree that there's plenty of reason to be skeptical about the demand for this kind of service, but I'd argue that most video strategies at this point are far from a sure bet. "

True. Have to give AT&T credit though. They're actually attempting to do something about the cord cutting phenomenon, when many cable operators are just doubling down on their existing stale ideas (more price hikes, more bloated bundles) as if nothing was evolving around them.
Reply | Post Message | MESSAGES LIST | START A BOARD

KBode 9/14/2017 | 5:38:37 PM
Re: Not sure about the ditching part Yes the writing has been on the wall for U-Verse TV for a while now. Like the fact that all new customers are directed to DirecTV. And soon, those customers will be directed to whatever this new service is. The entire efforts feels a little fractured, though it's nice to see AT&T looking down the road all the same.
Reply | Post Message | MESSAGES LIST | START A BOARD

danielcawrey 9/13/2017 | 6:38:16 PM
Re: Not sure about the ditching part I would have to guess OTT is much more efficient to deploy over satellite service. Satellite these days seems unnecessary unless you live in a very rural area.
Reply | Post Message | MESSAGES LIST | START A BOARD

mendyk 9/13/2017 | 5:19:58 PM
Re: Not sure about the ditching part The other retail boxes aren't under AT&T's control, so maybe that's why this program is being floated. I agree that there's plenty of reason to be skeptical about the demand for this kind of service, but I'd argue that most video strategies at this point are far from a sure bet. This strategy suggests, however, that some people in AT&T see a future in brokering OTT content. There's some merit in that idea.
Reply | Post Message | MESSAGES LIST | START A BOARD