Despite warnings it might encounter a "modest headwind" from Disney+ and Apple TV+, Netflix added 8.76 million paid streaming subs worldwide -- 420,000 in the US -- during Q4 2019. The Q4 total handily beat Netflix's expectations of 7.6 million paid adds.

As detailed in a letter to investors, Netflix ended Q4 with 167.09 million streaming subs worldwide, up 20% year-over-year. In the US, Netflix added 420,000 paid streaming subs, upping that total to 61.04 million. Netflix added 1.53 million US subs in the year-ago quarter in what has become a saturated market.

Looking ahead, Netflix expects to add 7 million paid net adds worldwide in Q1 2020 and end the period with a total of 174.09 million.

On the financial end, Netflix pulled in Q4 revenues of $5.46 billion, up 31% year-over-year, and net income of $587 million ($1.30 a share), versus expectations of $5.44 billion. Netflix ARPU rose 9% in Q4 2019 while ending the period with a whopping $19.5 billion in "streaming content obligations," which includes costs for licensing and producing its variety of series and movies.

Netflix noted that paid net adds in the US and Canada were 550,000, down from 1.75 million in the year-ago quarter, acknowledging that the low rate of growth is "probably due to our recent price changes and to US competitive launches."

Regarding competition, "[m]any media companies and tech giants are launching streaming services, reinforcing the major trend of the transition from linear to streaming entertainment," Netflix explained in its investor letter. "This is happening all over the world and is still in its early stages, leaving ample room for many services to grow as linear TV wanes. We have a big headstart in streaming and will work to build on that by focusing on the same thing we have focused on for the past 22 years -- pleasing members."

But Netflix also went out of its way to illustrate how its new original series are stacking up against recent exclusives from other OTT video service providers.

Notably, Netflix said the December debut of The Witcher starring Henry Cavill "is tracking to be our biggest season one TV series ever," with 76 million subscribing households choosing to watch. Netflix also cited Google search trends data showing how The Witcher stacked up positively next to Disney+'s The Mandalorian, Apple TV+'s The Morning Show and Amazon Prime Video's Jack Ryan. 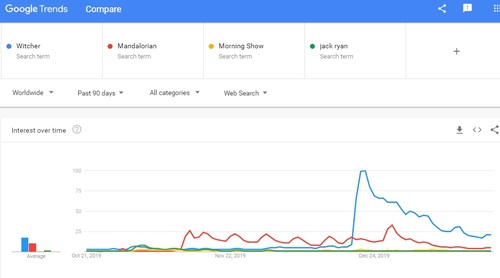 Update: Netflix also shared new details on how it will now report on accounts that choose to view a given title, including TV shows and movies. Under the new definition and methodology, which Netflix claims to be similar to what's used for the BBC iPlayer and for YouTube view counts, a household is reported as viewing a given title if that title was watched for "at least 2 minutes -- long enough to indicate the choice was intentional."

That's a big change from Netflix's previous definition of a view, which was based on a households that watched 70% of a single episode of a series or an entire film, holding that this previous metric "makes little sense." Netflix said the new metric is about 35% higher on average than the prior metric. For example, Netflix said 45 million subscriber households chose to watch Our Planet under the new 2-second metric versus 33 million under the old metric.

Kelsey Ziser 1/22/2020 | 4:51:50 PM
Toss a coin to your Witcher...or Netflix Not surprised The Witcher is so popular...perhaps it's a more digestable version of Game of Thrones? Also has a really catchy theme song :)

How does Apple TV+ stack up against other OTT providers? They seem to have some decent content.