LONDON -- Ericsson Media Solutions, the video networking part of the Swedish vendor's business that's being sold to a private equity firm, is now called MediaKind and is getting ready for an independent future that looks likely to involve strategic M&A action and some major schmoozing of smart city developers.

The unveiling of the new brand, made here in London by CEO Angel Ruiz, came packaged with a lot of enthusiasm and hints of things to come, but little in the way of detail. That's because the deal that Ericsson AB (Nasdaq: ERIC) struck in January this year to sell 51% of its Media Solutions business to One Equity Partners has not yet closed (that is expected in the third quarter of this year), so MediaKind is not yet a standalone, separate operating company. (See Ericsson Stuck in Loss-Making Rut, Offloads Majority Stake in Media Unit.)

"There was a lot of demand for us to have a new name, a new image and that's why we've done this now," the unit's CMO, Arun Bhikshesvaran, told Light Reading.

So Ruiz didn't want to answer any questions at this point about MediaKind's annual revenue run rate, whether it is profitable and how many staff it has, though he did note that staff numbers have declined during the past year or so and that tasks previously performed in prime locations had been "offshored."

But Ruiz admitted on the sidelines of the brand unveiling ceremony that staff numbers and operating costs have certainly been declining during the past year: He noted that Ericsson's Media Solutions had been built up over the years from a number of acquisitions -- think Tandberg TV, Mediaroom -- that hadn't properly been integrated, that there was "low hanging fruit" in terms of the costs that could be cut and that the company was now "rightsized."

It's worth noting, though, that the Media Solutions business had been struggling for a while, despite growing volumes of video traffic on all sorts of networks and the need for specialist technology to manage and deliver that traffic: The last time it was included in Ericsson's detailed financial reporting, in the first quarter of 2017, it generated sales of 1,964 million Swedish krona (US$224 million), down 20% year-on-year, and was losing almost as much money as it was bringing in.

Since then, operating margins have been improved significantly, the CEO noted (and it's fair to assume that One Equity Partners will not be ready to adopt a loss leader). 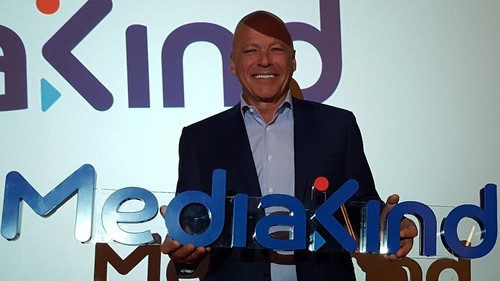 Angel Ruiz, CEO of MediaKind: Pumped by the opportunities but knows the business has a lot to prove.

Once MediaKind is standing on its own two feet, and is no longer shielded by Ericsson's selective financial reporting (the media business is currently bundled into a reporting line called Other), it'll be interesting to see if it's prepared to share any details.

One stat that was shared was the number of customers -- more than 900 -- for the unit's product portfolio that comprises systems for video compression, software and hardware-based video processing and storage, cloud- or premises-based content delivery and publishing, and analytics tools. (MediaFirst is its main product platform name.)

That sounds great but there was a reason why Ericsson didn't want to own this business anymore and much of that is to do with the levels of investment needed to stay relevant. Ruiz seemed desperate to share plans but bit his lip: He noted that Ericsson's new management under CEO Börje Ekholm didn't much like the fragmented nature of the video networking and content management technology industry and saw that consolidation was needed. Now Ericsson can leave any such consolidation (M&A) efforts to One Equity Partners.

So once the shackles are off, will MediaKind be in M&A mode? Ruiz just smiled.

What it will be doing is leveraging the mobility heritage and knowledge base of Ericsson -- not forgetting, of course, that the giant and influential Swedish vendor will still be the main channel to market and provide insight and support (if not major investments) for MediaKind.

"Media today is very entertainment-based," noted Ruiz, adding that there are almost 1 billion smart TVs in use today. "But think of the number of mobile devices out there when you can port from screen to screen -- that's what it's going to be all about personalized multi-screen media delivery. Our team has a good mix of mobility, media and business."

And the CEO was effusive about the opportunities around smart cities. "Entertainment still carries the media space, but we have talked to city officials and they want to know how video can help them run cities and hospitals and schools that's an obvious future staring us in the face. Being video-focused today is all about entertainment but we are looking at what video will be in 2025 -- security, safety, city operations all these network operators, service providers, broadcasters and content owners are interested in how networks will progress to carry all that video. Our video storage platform with analytics will become very important, especially as the need increases for video recognition coupled with analytics," said Ruiz hopefully.

So, even though it's not yet spun off, is this a significant move for the business? Independent media and telco technology analyst Paolo Pescatore thinks so, but it also has to prove itself.

"Finally, the unit can get on it with business. This represents a new start, and it must deliver. No more second chances. Arguably, the unit should be well placed to exploit the opportunities in convergence underpinned by the growing demand for video usage: The equity firm can ensure a commercially minded focus, while it can still rely on Ericssons vast technical expertise and huge connections to thrive," noted Pescatore, who attended the London briefing.

"There will be obstacles that it still needs to overcome. In particular, regaining trust among existing and new customers," continued Pescatore, but "the new brand and future plans will go some way to restore confidence and rebuild credibility with the burgeoning media and telco industries," added the analyst.

MediaKind's big coming out party will be the annual IBC show (mid-Sept. in Amsterdam), by which time the company should have full control of its own destiny. After that, Ruiz and his colleagues, and the team at One Equity as well as Ericsson, will need to show that there is still some serious money to be made (rather than lost) in the media networking industry and show that maybe Cisco, in deciding to sell up and ship out altogether, has maybe made a mistake. (See Cisco Dumps Video Software Biz, Ends NDS Era and Permira Names CEO for Ciscos SPVSS Business.)