More than two years after Comcast first announced its IP-based skinny bundle service known as Stream, the cable operator is now making good on plans to expand its IPTV reach with the launch of a new product called Xfinity Instant TV.

Instant TV is rolling out in beta to existing Comcast Corp. (Nasdaq: CMCSA, CMCSK) Internet-only subscribers across the company's entire service footprint over the next two weeks. For $18 per month -- plus local taxes and fees, which will vary by market  Instant TV customers will gain access to live and on-demand programming from all of the major broadcast networks (ABC, CBS, CW, FOX, NBC, PBS, Telemundo, Unimas, Univision), plus public, education and governmental (PEG) channels.

Instant TV will also offer 20 hours of cloud DVR storage, and it will support two concurrent video streams per account. At launch, Instant TV will be available on computers, mobile devices and via the Roku platform. 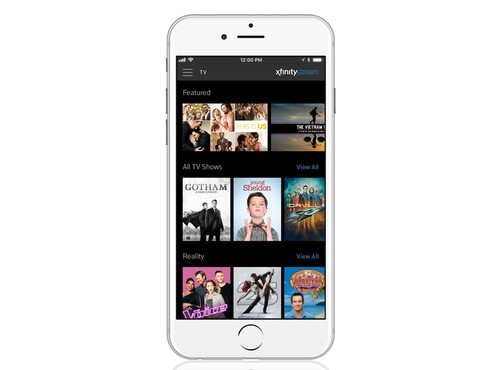 Subscribers can access the new Instant TV service through the Xfinity Stream app.

Comcast is treading a very fine line by offering a low-cost video package while also continuing to promote its full-featured X1 service. If too many customers sign up for Instant TV instead of the more expensive X1 bundle, it could seriously cut into Comcast's profit margins. (See Comcast Lines Up Fall Launch for 'Instant TV'.)

However, the cable operator sees the development of the new service as more than just the introduction of a cheap television alternative. Instead, Comcast is positioning Instant TV as a way to expand its reach to Internet-only customers, while also laying a foundation for future services that are delivered and consumed in new ways.

"While Instant TV is the tip of the spear in how we're planning to go to market, a lot of the development and the infrastructure and the learning that we've been doing over the years was really never under the lens of us only having applications for Instant TV," explains company EVP Matt Strauss. Instead, Comcast wants to take what it's learned with Instant TV and "make it available to all of our customers."

What does this mean exactly? It's not entirely clear, but Strauss suggests that Comcast may take some of the attributes of Instant TV and spread them to more of its offerings over time. For example, Strauss likes the idea of customers signing up for service and getting immediate access to content through an app without having to wait for additional equipment. That doesn't mean that traditional leased set-tops will necessarily go away, but Strauss believes new subscribers to more of Comcast services should be able to start streaming some video instantly before additional content and features are activated after hardware has been installed.

Strauss also likes the idea of consumers being able to try more services before they buy, and the concept of modularity where subscribers can buy one basic package and then add to it with different add-on packs. Instant TV follows that model with additional channel packs available in the categories of Kids and Family, Entertainment, Sports and News, Latino and Deportes. Bonus packs range from an extra $5 to $30 per month.

Comcast has been working on its IPTV strategy for a long time, but Strauss emphasizes that those years have allowed it to build an IP-based platform to serve as the foundation for all of the company's video services. Comcast's cloud infrastructure and app interface now support the operator's entire video portfolio. The Comcast app, called Stream, can be used to access X1, Instant TV or even Comcast's service for college students known as Xfinity on Campus. (See How Comcast Is Hooking College Kids on Cable.)

To be clear, that doesn't mean that Comcast is offering an over-the-top video service. Despite being delivered through an app, Instant TV is streamed over a managed IP network, which is why users must have Comcast broadband equipment, and why video streaming through the app doesn't count toward a subscriber's monthly Internet data cap. Instant TV doesn't use the open Internet, so the bandwidth it requires doesn't count against users' monthly data allowance. (See also The Skinny on Comcast's Skinny Bundle.)

However, there is an exception to that rule. When subscribers are outside the home, they can access a subset of content with Instant TV over the Internet, the same way that X1 users can stream content from Comcast's flagship service while on the go. The cable industry calls this function "TV Everywhere," but while the label is supposed to make the feature split less confusing, in many ways it just makes the division of content and data usage rules harder to understand.

In part, the schizophrenic nature of how Comcast delivers its services comes down to content rules and rights. But only in part. Like all of Comcast's offerings -- including Xfinity Home for home security and Xfinity Mobile -- Instant TV is only sold within the cable company's footprint. And the reason for that is largely financial.

Comcast could, in theory, offer its TV services entirely over the top, but there's no incentive to do so. The company earns a lot more money when it pairs video streaming with broadband service. That's the way Instant TV works, and until the day OTT proves more profitable, that's exactly how Comcast will continue doing business.

iptvhdrpro 3/5/2020 | 10:54:49 AM
IPTV HDR PRO You share a good information about your presentation, hope in future you may also do more and more better and for any kind of help in your coming presentation.Thanks for shearing

Martha_Richards 6/27/2018 | 8:54:03 AM
Education Comcast has been engaged on its IPTV strategy for an extended time, however Strauss emphasizes that those years have allowed it to create associate degree IP-based platform to function the inspiration for all of the company's video services. Comcast's cloud infrastructure and app interface currently support the operator's entire video portfolio capstone research paper.
Reply | Post Message | MESSAGES LIST | START A BOARD

KBode 10/19/2017 | 5:57:51 PM
Re: Stream They're facing several lawsuits I believe for tacking on obnoxious fees to traditional service, but so far my understanding is they've avoided that with this new streaming service -- for now. But again, it's underwhelming in terms of features and I don't think Comcast's trying all that hard here. Push it too hard, and users downgrade from more expensive tiers and options.
Reply | Post Message | MESSAGES LIST | START A BOARD

kq4ym 10/9/2017 | 2:20:38 PM
Re: Stream And with all the fine print and misleading ads for these services one might wonder if the customer will really know what they're signing up for. And of course one of the mysteries of life are the taxes and fees that are added to the monthly bill. I don't think I'd be interested in the $18 service offered but there's llikely a substantial group that may just well sign up for it.
Reply | Post Message | MESSAGES LIST | START A BOARD

kq4ym 10/7/2017 | 9:34:13 AM
Re: Stream It does seem to me that it's right on point that " the schizophrenic nature of how Comcast delivers its services comes down to content rules and rights," and that may bite into how customers percieve these offers. Even at $18 a month I'm not sure I'd go for the new service, and although there's probably some who will bite and even go for more add ons, it does seem like marketing has their job cut out for them to make this profitable soon.
Reply | Post Message | MESSAGES LIST | START A BOARD

KBode 9/27/2017 | 2:01:57 PM
Re: Stream Good points. Yeah I'd assume they won't be marketing this heavily if at all, if past efforts are any indication. I also bet there's some additional caveats we haven't seen yet designed specifically to encourage upgrades if you want the "full experience" (read: a decent service). It must be frustrating as an engineer to cook up these services at a major ISP, only to have executives sabotage it because it might just present too MUCH of a good value.
Reply | Post Message | MESSAGES LIST | START A BOARD

msilbey 9/27/2017 | 1:54:54 PM
Re: Stream I imagine existing bundled customers are under contract and can't get rid of TV service that easily. I also wonder if Instant TV would even be available to a traditional TV customer if/when the time came to renew.
Reply | Post Message | MESSAGES LIST | START A BOARD

KBode 9/27/2017 | 1:37:06 PM
Re: Stream So what mechanism is in play that would prevent existing Comcast bunlded customers from dicthing TV service, then signing up for this? Do we know of any?
Reply | Post Message | MESSAGES LIST | START A BOARD

msilbey 9/27/2017 | 9:55:28 AM
Re: Stream The new service is only available to a very select group of people for now (existing Internet-only subs), so that gives Comcast some breathing room financially. The question is over time how Comcast makes Instant TV profitable if more people choose the skinny bundle over traditional service. It may work if the company can time things right. Eventually (long term), I assume most of the X1 features will be available as add-ons to Instant TV. Then, presumably, there will be incentives to continue adding to the most basic Instant TV package. As far as I'm concerned, this is the reset that cable TV had to go through. The bundle got to big, so now it's time to re-establish a lower baseline.
Reply | Post Message | MESSAGES LIST | START A BOARD