NEW YORK -- Cable-Next Gen Business Strategies -- Comcast Business is testing an app developed by a startup called GameOn that enables patrons in bars and restaurants to participate in sports prediction games that generate points that, in turn, can be redeemed for prizes.

That app, integrated with a version of the cloud-based X1 video platform for business customers, is currently being piloted at a small number of locations in Philadelphia, though plans are underway to introduce the GameOn app to business customers in additional US markets, Christian Nascimento, VP of product management at Comcast Business, said Tuesday morning during a keynote presentation here. 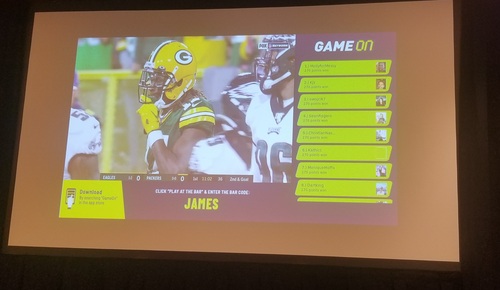 For the pilots in Philadelphia, the GameOn app running on Comcast's X1 platform appears as an 'L-bar' alongside the live TV feed of the sports event.

In the pilot iteration of GameOn developed for the X1 platform Comcast Business has deployed for commercial customers, the interactive prediction game appears in an L-bar that is wrapped around the live TV feed of the sporting event. The trial with GameOn ties into ongoing work at Comcast and its business services unit to develop apps that can make sporting events shown at bars and restaurants more engaging, Nascimento said.

GameOn, which has already launched a free version of its app for iOS and Android devices, is also a member of the 2019 class of the Comcast/NBCU Lift Labs Accelerator, an incubation program for a variety of startups.

The GameOn app is one example of how Comcast Business has adapted the cable company's X1 video platform to serve the commercial customers. Nascimento noted that X1 for businesses launched earlier this year, and a newer version of the product designed for hotels, will formally launch in the MSO's Northeast division next week, with plans underway to launch it in Comcast's West and Central divisions. He said more than 20 venues already deployed the company's new hospitality-focused X1 product.

Though residential pay-TV continues to be a sore spot for most cable operators, this new business-oriented version of X1 has become a growth driver at Comcast Business, serving as a new add-on it can pitch alongside broadband, voice and other services in that unit's portfolio.

TV services are "critical" to bars and restaurants, Nascimento said.

The newly tailored version of X1 for business represents one path Comcast Business is taking to drive revenue growth.

Noting that connectivity remains the "lifeblood" of businesses, Comcast Business is using its blend of HFC and fiber networks to deliver a broader range of apps for commercial customers, including Connection Pro, an automated LTE-based backup system; a video monitoring service that uses IP-connected HD cameras; a managed WiFi platform; ActiveCore, an SD-WAN service being used for Comcast Businesses's move up-market to serve midsized and enterprise-level commercial customers; and SecurityEdge, a cloud-based security service for businesses.

"There are huge opportunities in the cybersecurity space for us," Nascimento said.