Las Vegas -- For TV manufacturers, 8K is the next big thing in image resolution and a platform that, they hope, will help spark unit sales growth in the years to come, as consumers clamor for bigger screens that can deliver an eye-watering, cinematic experience beyond what they get today with 4K/Ultra HD and HD.

At CES last week, Samsung trotted out an 8K set called the Q950TS that has almost done away with bezels, providing an screen that, edge-to-edge, is "99% picture," according to CNET's look at it. While the new model is dazzle-worthy and Samsung has yet to release pricing on it, CNET is also suggesting that consumers take a hard pass on buying 8K TVs -- at least for now -- given their high premium price. Sales volumes remain minuscule, with almost complete lack of content that takes full advantage of 8K's capabilities. 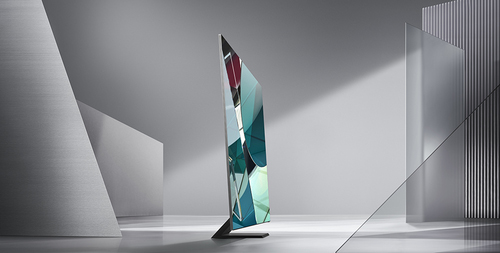 Sony's nearly bezel-free 8K TV is pretty, but is also expected to cost a pretty penny when it's released into the wild.

Meanwhile, Sony this week introduced the Z8H, an 85-inch 8K LED TV with integrated Dolby Vision and Dolby Atmos support and integrations with smart speakers from Google and Amazon.

Most consumers are satisfied with today's 4K TVs and the 4K content that's available to them, but Sony would be "remiss" if it did not start to push ahead now with 8K, Cheryl Goodman, head of corporate communications for Sony Electronics North America, said here Thursday, January 9, on a panel dedicated to 8K.

Paul Gagnon, director of analysis and research of consumer devices at IHS Markit, who has covered the TV manufacturing market for about two decades, isn't ready to declare 8K a world-beater in the making. "We're a little bit cautious" about 8K's near-term market potential, Gagnon said.

He noted that 8K doesn't have the same guideposts and factors aiding the transition. HD was aided by the transition to digital broadcasting and the pivot to flat panel sets, and 4K has been helped in part by the rapid adoption of larger screen TVs that can bring those images to life.

8K, Gagnon said, is generally applicable to TVs with screen sizes of 60 inches or more, meaning that the concentration of adoption will largely take hold in the US and China. The US is "a critical market for growth" for 8K, he said.

Small sales
And 8K TV sales are expected to remain a drop in the bucket in 2020. IHS Markit expects about 320,000 8K units to be sold this year, but allowed that the market will grow as more TV makers get on board with 8K and help to drive prices down.

A new sales forecast from the Consumer Technology Association, CES's showrunner, is little more ambitious, but tells a similar story. CTA expects about 504,000 8K TV units to be sold in the US in 2020, and cross the $1 billion revenue milestone for the first time, pulling in about $1.6 billion.

Despite 8K efforts tied to the TV production of the 2020 Summer Olympics in Tokyo, lack of 8K content is another chicken-and-egg problem that will keep the market in slow gear. Some pay-TV service providers and subscription VoD services do offer a subset of 4K content, but 4K represents a small minority of the total live TV and/or on-demand content they offer. Meanwhile, the emerging ATSC 3.0 broadcast TV signaling standard will support 4K -- not 8K -- out of the chute.

But some panelists here believe that 8K sets that can upscale 4K and HD content will help to bridge that content gap a bit. "It's about getting rid of the pixel structure," Florian Friedrich, CEO of FF Pictures GmbH, said, noting that the benefits of upscaling on 8K TVs, when it's done well, is surprising.

Robert Zohn, president of retailer Value Electronics, believes that the gap will also be filled with consumer generated content using new cameras that can shoot 8K. That will "explode the market for content," he predicted while holding up a small handheld 8K camera from Sharp that will become available in the second half of 2020. That, in turn, will make 8K a more important element for OTT platforms such as YouTube, he added.

While TV makers probably can't wait for 8K to take off and help them sell more sets, the expected slow adoption of the next-gen platform should be welcome news of sorts for broadband and pay-TV providers -- they'll have time to upgrade to more efficient codecs and devices and bump up capacity before there's enough 8K content and displays in the market to really matter.

The value proposition for 8k is weak. 4k is more than good enough for most consumers. The difference in image quality is so small as to not be worth higher prices. As the article points out, you need a 60-inch display to be able to tell the difference. No use when viewing on a phone or tablet.

Network implications: 8k isn't going to drive a new round of traffic growth in the Internet or edge.