LAS VEGAS -- CES 2019 -- TVs with 8K resolution capabilities will start to enter the US market in 2019 as shipments of 4K/Ultra HD sets rise 14%, according to the Consumer Technology Association's semi-annual "U.S. Consumer Technology Sales and Forecast."

Some 200,000 8K TV units, worth some $545 million in revenues, are expected to ship in the US this year, the Consumer Technology Association (CTA) noted as it released a fresh set of market forecast numbers here on Sunday afternoon. US 8K TV shipments are expected to hit about 1.5 million by 2022, the CTA predicts. 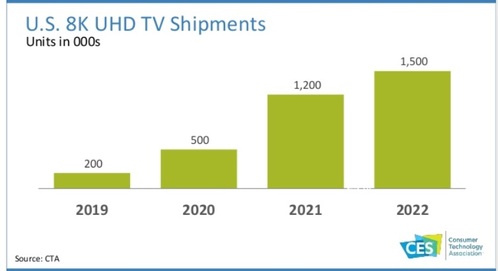 Those 8K sets will support four times the resolution of 4K sets, and content created in that format will put additional strain on broadband networks of all types.

8K is expected to be a major focus for TV makers at this year's CES. Samsung, for example, unveiled a 98-inch 8K set, the Q900 QLED, with more screen size options slated to debut later in the year, but it hasn't announced pricing. Additionally, details about a new organization called the 8K Association are due to be announced here on Wednesday afternoon.

Larger screen sizes deliver a better 4K resolution experience and, not surprisingly, the same goes for 8K, said Ben Arnold, senior director, innovation and trends at CTA, during a presentation of the organization's latest market data.

While 8K products are just starting to appear in the US market, they are already established in Japan. NHK, the Japanese broadcaster, launched an 8K channel last month, debuting with a broadcast of 2001: A Space Odyssey. NHK is preparing to make a big deal of its 8K services during the 2020 Summer Olympic Games in Tokyo.

The CTA said overall sales of digital displays in 2019 will be flat, at 42 million units, and bring in $22.6 billion in revenues, up 2% year-on-year. More than three-quarters of TV shipments in 2019 are expected to be models with 40-inch screens or larger.

Shifting to video and music streaming, CTA expects that market to generate $26 billion in revenues this year, up 25% from 2018. Subscription video services will bring in some $18 billion in 2019, up 27% from the prior year.

Here's a snapshot of other market stats from the CTA's new study:

As for an over-arching trend heading into this year's show, consumer tech is now entering the "data age," built on the foundation of the digital age that started around 2000 and on the tail of today's connected age, Steve Koenig, the CTA's VP of market research, said. "Data is going to be the common denominator."