The US pay-TV industry shed another 637,000 subscribers in the third quarter of 2021 as gains from virtual multichannel video programming distributors (vMVPDs) continued to be dwarfed by the losses from traditional cable, satellite and telco TV service providers.

That loss of 637,000 subs in Q3, a figure that includes both traditional providers and vMVPDs, widened from a loss of about 100,000 in the year-ago period. That resulted in a rate of decline of 5.2% – among the worst on record – according to MoffettNathanson's latest Cord-Cutting Monitor report (registration required).

Traditional service providers lost about 1.61 million subs in Q3 2021, a small improvement from the 1.83 million lost in the year-ago period. "The absolute number of traditional Pay TV subscribers cutting the cord has begun to moderate. The percentage decline has not," MoffettNathanson explained. 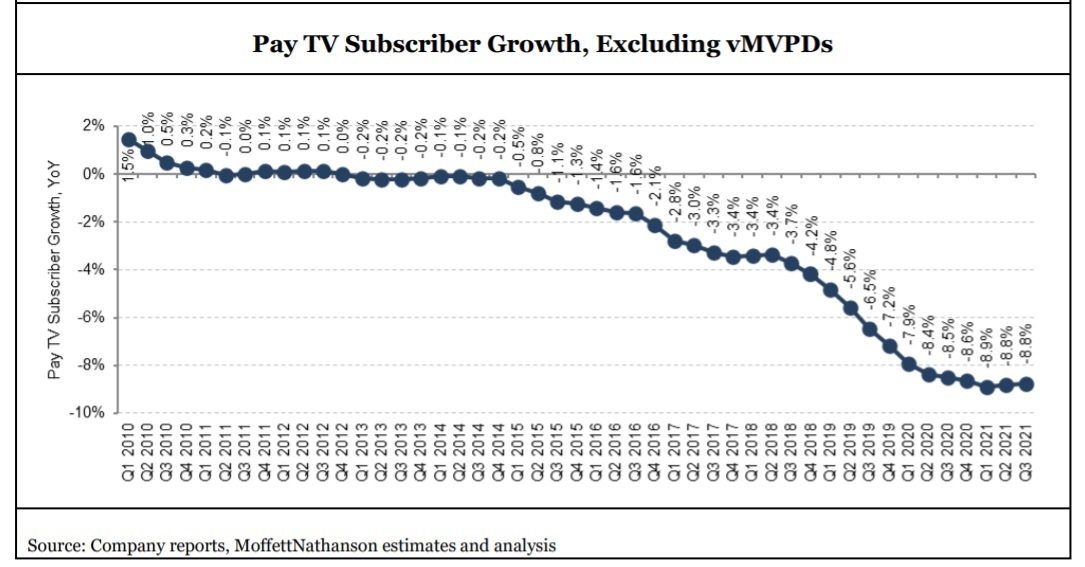 Within that group, US cable shed 793,000 pay-TV subs in Q3 (versus -486,000 a year ago), a 6.2% rate of decline that was the fastest decline on record, according to MoffettNathanson. Among individual providers, Comcast lost pay-TV subs at more than three times the rate of Charter Communications: -7.7% versus -2.1%.

The rate of losses among satellite TV providers – at -12% – is still nearly double that of US cable, but the rate of decline "is at least somewhat off the recent bottom of -14.0% a year ago," MoffettNathanson noted.

Notably, Dish Network's focus on rural markets helped to improve the rate of sub loss to -6% (versus -7.7% a year ago). However, Dish's rural success could be challenged as telcos, cable operators and other service providers ramp up fiber network builds in underserved and unserved areas, opening the door to an array of streaming services. 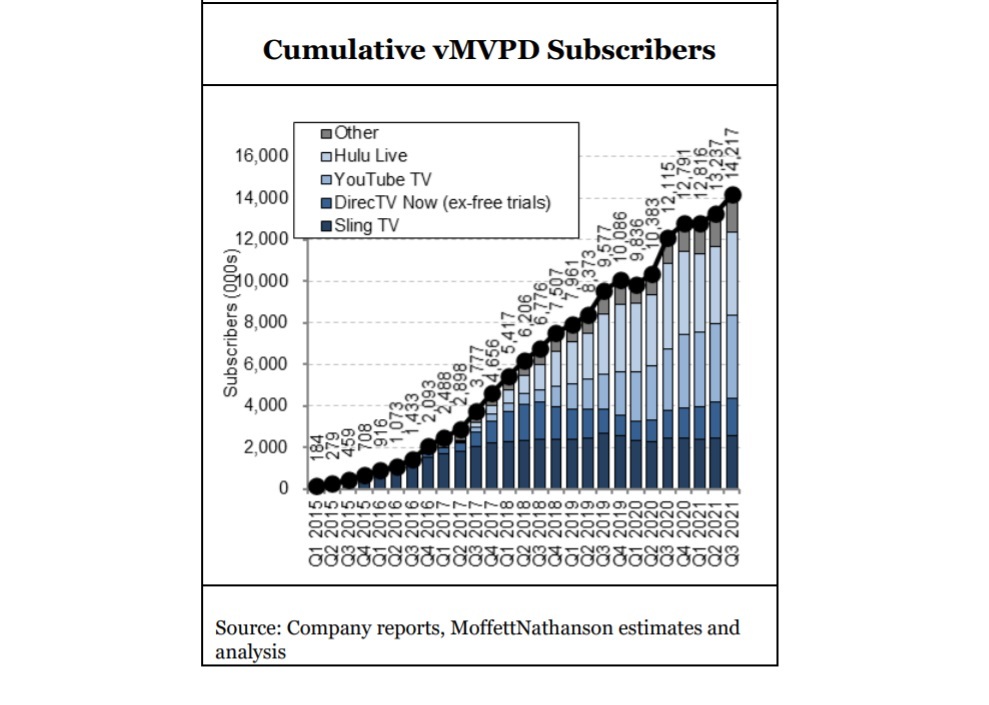 The vMVPD conversion rate (the rate at which traditional video subs are recaptured by virtual MVPDs) dropped to 31.4% in Q3 2021, versus 36.1% a year ago. Part of that drop is likely tied to recent price increases among most vMVPDs, as well as no-contract structures that expose them to higher levels of churn, the analysts surmised.

Bigger picture, MoffettNathanson is keeping close tabs on how national and regional sports networks, considered the glue holding the pay-TV bundle together, could further impact subscriber losses in the future.

In a recent report that tied in new survey data from Altman Solon, MoffettNathanson suggested that there are about 58 million sports viewing households still taking the pay-TV bundle, representing "a potential floor for linear subscribers over time."

Should Disney decide one day to take ESPN fully direct-to-consumer (DTC), MoffettNathanson believes it could "trigger a complete collapse of the system." Thus far, Disney has taken a more conservative path with ESPN+, a premium subscription add-on. That approach has contributed to a relatively orderly decline of pay-TV.

"But there is clearly a risk that the declines become disorderly," the analysts explained. "All it would take is one major player  ESPN is the obvious candidate  to decide that the future demands a bolder shift in their best programming to DTC, or, alternatively, that their entire suite of programming should be simultaneously available DTC... and the Jenga tower would collapse."