If Telecom Italia were the Roman Empire, the year is probably sometime in the mid-fifth century, when a system rotting from within was under constant attack by outsiders. The toppling or murder of emperors had become as routine as the modern-day boardroom reshuffle. Vandals, Visigoths and other Germanic tribes with names evoking destruction and darkness were banging barbarically at the gates.

For weak Roman administration, substitute strategic shortcomings and local regulatory blunders. Swap regicide for the frenzied hiring and firing of bosses. Replace marauding European tribespeople with private-equity predators. And behold Telecom Italia. Once Europe's most valuable telecom property, the Italian phone incumbent is a case study in what happens when just about everything goes wrong. 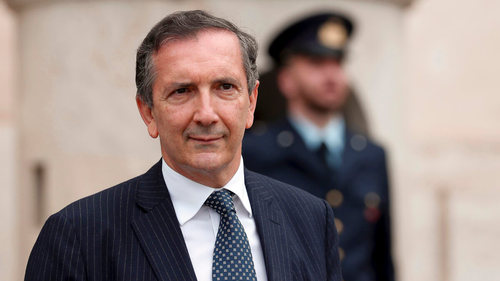 The latest misfortune to befall its long-suffering shareholders is a downgrade to forecasts. Previously, Telecom Italia had been guiding for a "high single-digit decrease" (in percentage terms, unfortunately) to organic EBITDA AL (a convoluted measure of profitability that dismisses various unfavorable items) in Italy this year. That has been revised to a "low teens decrease," sounding like an affliction that strikes adolescents.

The main culprit seems to be the wireline business, and specifically a partnership with Dazn, a video-streaming service, that has not lived up to expectations. Telecom Italia did not elaborate on the details in the statement it issued late on December 15, but the two companies struck a deal for the rights to Serie A soccer matches back in March. In November, Telecom Italia was reported to be seeking a renegotiation of that deal after disappointing results.

Italian wireline, while the largest contributor to sales, is not the only problem, either. Telecom Italia has been losing mobile customers ever since Italian authorities allowed Iliad, an aggressive French upstart, to launch a rival service as a condition of the merger between 3 Italia and Wind Telecomunicazioni  a decision that ensured the Italian mobile market would remain a four-player affair and be an even harder place to make investment returns in future.

Since March last year, Telecom Italia has lost about 1.3 million mobile customers of the human variety (it also counts machine-based connections in its numbers), leaving it with about 19.2 million at the end of September. Its third-quarter mobile revenues in Italy were down 4.5%, to 966 million ($1.1 billion).

Telecom Italia has been divesting chunks of its empire to pay off debts, protect margins and support its focus on services. Its mobile towers in Italy are now part of a joint venture with Vodafone called Inwit, in which Telecom Italia holds only a 37.5% stake. More recently, it has sold that same amount of the peculiarly named FiberCop, its fixed-line business, to KKR, a US private-equity firm, for 1.8 billion ($2 billion).

That chipped away at Telecom Italia's substantial borrowings, but it still leaves the company with about 22 billion ($24.9 billion) in net debt. The situation has not deterred KKR from pursuing a full takeover of Telecom Italia, whose share price is just 8% what it was at the turn of the millennium, when the empire was at its zenith. On November 21, KKR made a $12 billion offer for a company then carrying a market cap of about $8.1 billion. Including debts, the private-equity firm would have been stumping up about $37 billion.

The next chapter in the saga is likely to be a battle for control, with France's Vivendi  which owns a 24% stake in Telecom Italia  rumored to be in talks with CDP, an Italian state lender, about reviving the operator's fortunes without KKR (because Vivendi has done such a great job of revival so far). For the private equity firm, the main interest probably remains in Telecom Italia's infrastructure assets. Under KKR ownership, a breakup of the business would seem likely  a prospect that surely horrifies some Italian politicians.

Luigi Gubitosi, Telecom Italia's fourth CEO in just six years, quit as KKR was circling, after a boardroom bust-up with Vivendi. The French company was reportedly unhappy with his performance, but it should probably be asking why a succession of apparently capable managers has failed to deliver a meaningful improvement. Could owners that have interfered in strategy and repeatedly clashed with other shareholders bear some responsibility, perhaps?

As documented by Edward Gibbon, the decline and fall of the Roman Empire produced thrills until the final moments, when Romulus Augustus, the last of the western emperors, was deposed by a hairy German called Odoacer and exiled to the countryside around Naples (there are worse places). For telecom historians, the dismantling of Telecom Italia would be no less dramatic.