Comment (1)
With more than a million drones now registered to fly in the US, Verizon has been firming up its plans for unmanned flights using both its 4G and 5G networks.

Drones are being sold in record numbers, with 1,509,617 drones registered for use in the US as of December 10, 2019, according to the Federal Aviation Administration (FAA). These are mainly recreational drones, the FAA says, with just 420,340 commercial drones registered.

At the end of December 2019, the FAA said that all drones over 0.55 pounds in weight should broadcast their radio tracking data to ensure greater air traffic safety and protect against terrorism. The draft rules call for a new tracking network for everything from consumer toys to commercial drones to ensure that law enforcement can spot the devices flying anywhere in the country. The plan is still subject to public comment.

Verizon's early drone efforts Verizon has been involved with trials and initial commercial services for unmanned aircraft since October 2016. The operator held trials for drones to be used by first responders in various parts of the US in 2016. It started to sell wireless data plans specifically for drones at around the same time.

Verizon then bought Portland, Ore.-based drone management company Skyward in February 2017. That business now operates as a division of the carrier. The reason for the acquisition was to help businesses better manage drones that use Verizon's mobile network infrastructure and services. 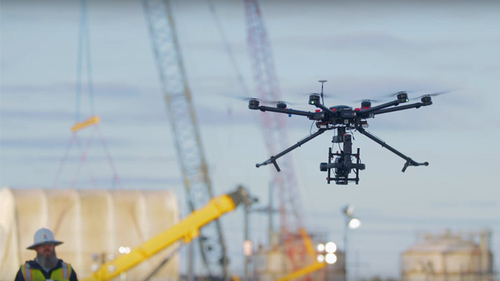 Verizon now says that it offers access to both 4G LTE and millimeter wave (mmwave) 5G networks as part of its drones push. The carrier states that it has a goal of carrying 1 million drone flights on its 5G network.

"We have already begun to do this on a small scale through Skyward," says a Verizon spokesperson in an email to Light Reading.

"In the short term, we see near real-time video streaming (for live news broadcasts and vertical infrastructure inspections, for example) as a major use case that our customers can leverage today in areas where there is 5G," adds the spokesperson.

Of course, the ability to access the mmWave network is still limited because of the very low coverage (1000-2000 feet per radio node) provided by the mmWave 5G network.

So, while a TV crew in midtown Manhattan might be able to access 5G video streaming via drones, an equivalent TV team in the middle of Brooklyn would not currently be able to access 5G. Verizon presently offers 5G service parts of 31 cities in the US.

Why this matters The FAA established initial recreational rules for recreational drones in 2015. Drones are already a popular consumer gadget, but are only now starting to come into business use.

Early applications include using drones to inspect oil pipelines, check cellsites and gather agricultural data. Verizon, like companies from Amazon to Uber, is also very interested in using drones for package delivery, which will probably be addressed within the next five years.

Verizon's 4G LTE network will serve as the backstop for Verizon's drone efforts for the time being. "4G LTE also has a lot of untapped potential in terms of connected drone flights," said the Verizon spokesperson. The operator's current airborne LTE plans enable live data transfer, including real-time telemetry information, from the unmanned aircraft.

"Long term, we see the potential for drones of all kinds leveraging our various network capabilities for package delivery, near real-time data capture and analysis, and even in service [as] air taxis," the Verizon spokesperson says.

joe_average 1/8/2020 | 6:19:44 PM
Just image the noise! For those of us suffering under the increased jet noise caused by the FAA changes to their "NEXTGEN" flight paths, it is frightening to consider how much 1 million drone flights will increase the noise. At least commercial jets mostly slow down during sleeping hours. These drones are likely to operate 24/7.

The FAA has ignored public, local government, and congressional demands on NEXTGEN so I don't expect that impact to public will be considered here either UNLESS concerned citizens get involved.

If you think this is hyperbole, just google 'NEXTGEN noise'. There have been millions of complaints just in the SF Bay area with no mitigations. Although the FAA did create a long string of broken promises. :(