The monster stands are being disaggregated, the outdoor seating areas scrubbed clean of spilt patatas bravas and COVID-19 particles, Jon Bon Jovi has stowed his guitar for the next event and hungover attendees  on their return flights home  are trying not to projectile-vomit last night's dinner over the headrest in front. Another Mobile World Congress (MWC) has abruptly ended, and Barcelona is going telecom tradeshow cold turkey until February next year, when it will overdose on all things 5G-related yet again.

For obvious reasons, this was not the mobile assault on Catalonia that normally happens at the start of the year but one of those subdued parties where most of the invitees are no-shows and all the excitement is confined to one room of the house. As possibly the first major industry tradeshow to run since the start of the pandemic, it tested the feasibility of holding a major international event over several days amid a health crisis. So how did it do?

Ideally, an assessment would be written by someone who attended the show in person. Unfortunately, Light Reading and sister publication Telecoms.com were unable to send editors this year, largely on account of UK government travel restrictions (boo, Boris Johnson). Mugs of English breakfast tea and streamed conference presentations had to substitute for that hurried trot between halls for the next face-to-face meeting. 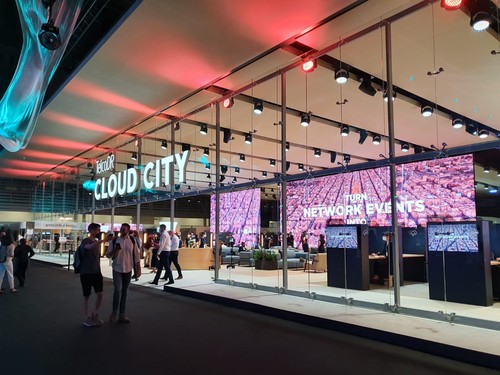 Where Ericsson would normally exhibit was Cloud City.

From afar, the first thing to say is that the GSM Association (GSMA), MWC's organizer, deserves credit for putting on any kind of event in these trying conditions and after so many of its main exhibitors had withdrawn. Criticism that it was being irresponsible by hosting a potential "superspreader" event was ridiculous, frankly. Like the flu, COVID-19 has moved in for good. It will continue to mutate, and the world must either live with it, tolerating a new health risk, or bear the consequences of permanent restrictions. The rigorous but efficient system of health checks, noted by one attendee, shows the GSMA did as much as possible to minimize risk.

It's all in the numbers

Visitor numbers were massively down, though. In a normal year, MWC easily attracts more than 100,000 visitors. Amid coronavirus, it was hoping that at least 30,000 would still make the trip. But video footage seen by Light Reading showed an eerily quiet Hall 2 at midday on Tuesday when it would typically be jammed with people. The best estimates two attendees could provide were that between 5,000 and 10,000 visitors were there in person.

Estimating close-up is tricky, however. Asked to share data on visitor numbers, the GSMA provided the following statement: "As this year's event is hybrid format, we are combining data on attendance and engagement from multiple sources. Ensuring the validation and accuracy of this data is extremely important to the GSMA and we will provide details on the event early next week."

Attendance over the years 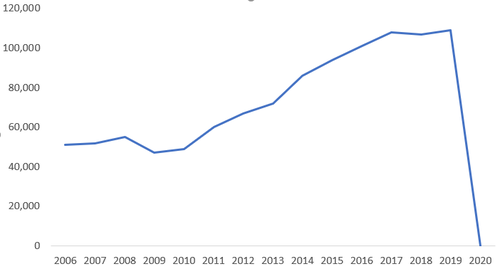 That suggests the GSMA may try to combine physical and virtual attendee numbers when it publishes data, obfuscating the truth about physical attendance. Any such ploy would suggest those attendee estimates of fewer than 10,000 visitors are close to the mark. A very low figure could have financial repercussions for the GSMA, which counts MWC Barcelona as its biggest source of income.

It would also send out the message that people are still not ready to travel, for whatever reason. Like this publication, many would have been hindered by government restrictions. Others, still waiting to be vaccinated, might have been worried about the health risks. Some did not want the hassle of mandatory checks and tests. And thousands would have reckoned that travel to an event featuring so few major exhibitors was simply not worth the effort and cost.

The main concern for the GSMA is the possibility that big exhibitors have had a permanent loss of appetite for monster shows. Despite the cancellation of MWC last year, Ericsson had one of its best years in recent memory, with sales rising 5% on a like-for-like basis and net profit up nearly tenfold. Company bosses and shareholders might decide they do not need MWC to land deals.

In the absence of exhibitors, MWC had to fall back on its conference program and hope for some attention-grabbing announcements by service providers and vendors alike. Unfortunately, there was a dearth of important news from the show. Deutsche Telekom and Orange had interesting things to say about open RAN and automation, but they held their briefings outside MWC's physical and virtual venues. A splurge of Vodafone announcements preceded MWC, as did updates by Ericsson, Huawei and Nokia. Telefónica seemed to forego its usual press conference altogether.

To compound all this, the overarching theme at a show denuded of visitors was of an industry that has succumbed to the public cloud and remains devoid of big ideas. Telco bosses took to the stage for their traditional rant about European regulators. AWS, Microsoft Azure and Google Cloud muscled into the sector, promising innovation and cost savings for their debt-ridden clients. The most exciting thing to happen at MWC was a video interview with someone from outside the industry  Elon Musk, one of the big-tech billionaires that telecom people seem to both idolize and fear. But you did not have to be in Barcelona to watch it.

IT'S MY LIFE... IT'S NOW OR NEVER!! 🎶
Thank you SO MUCH for this amazing performance. What an experience. @jonbonjovi @BonJovi @TelcoDR #CloudCity #MWC21 pic.twitter.com/KiN2SDXaTp

The production was slick, the show appeared to be as supremely well organized and managed as always, and there was some positively gushing online commentary by attendees heartened just to have seen a foreign land after months of domestic confinement. Some travelers appeared overcome with emotion. Perhaps they were relieved to find Europe still exists and has not become a wasteland roamed by cannibalistic COVID-19 survivors. Or maybe it was just the Bon Jovi concert.

After the flak the GSMA took in 2020 when it resisted canceling MWC until the eleventh hour, there will be a lot more sympathy for its efforts this year. But the real indicator of its prospects will come in February 2022.