XCOM Labs  the company founded in 2018 by several high-profile Qualcomm executives, including former CEO Paul Jacobs, following his failed attempt to raise money for a bid to take Qualcomm private  this week showed off its first public technology demonstration.

Interestingly, the company did so at the recent Milcom 2021 trade show in San Diego, an event focused on new technologies for the US military. The move indicates XCOM is joining the likes of Lockheed Martin, Verizon, Sempre and others in developing new wireless technologies and services for the US Department of Defense (DoD).

In a release from XCOM, DoD official Sumit Roy said the Pentagon "looks forward to the next wave of AR/VR innovations that aligns with DoD use cases." Roy is the program lead for "Innovate Beyond 5G" within the DoD's Office of the Under Secretary of Defense, Research and Engineering. 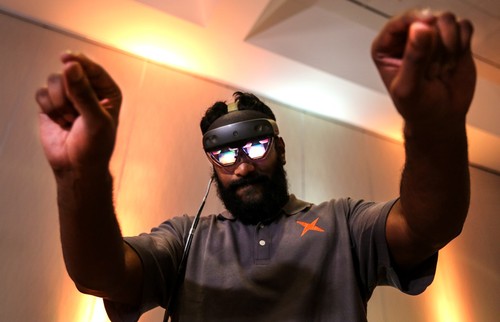 XCOM's partnership with Peraso is noteworthy considering all of XCOM's top leadership hail from Qualcomm, a rival chipset supplier that develops products for a variety of spectrum bands with a focus on 5G technologies. XCOM noted that its new XR system doesn't support 5G but that its "underlying technologies can be applied to 5G as well."

"There's been tremendous hype about the potential for the Metaverse to change our everyday lives, but the reality is that the underlying technology hasn't existed to deliver on the totally natural user experience we all imagine," said XCOM's Paul Jacobs in the company's release. "The XCOM team has built foundational technologies that changed society in the past, and with the introduction of XCOM wireless XR, we have our sights set on doing that again."

XCOM's leadership team includes Jacobs, Matt Grob and Derek Aberle, who all left Qualcomm following a restructuring at the company that included 1,500 job cuts. Since XCOM's founding, the company has hinted at interest in a variety of technologies, ranging from massive MIMO to phone-to-phone communications, but appears to have settled on XR as its first go-to-market offering.

That's not necessarily a surprise, though, considering augmented reality (AR), virtual reality (VR) and a mixture of the two have captured the interest of executives across the telecom industry. For example, AT&T today announced a new AR game the company built on Meta's Messenger or Instagram app. Meta, formerly Facebook, renamed itself amid a growing focus on the potential of a Metaverse that will rely on augmented and virtual reality technologies.