When it comes to low latency, 5G has seen lots of talk and little action. Operators launching the technology in Europe have positioned it mainly as an even higher-speed connection for smartphones. The lag in sending a signal  a barrier, say experts, to advanced services in gaming, robotics and virtual reality  has not disappeared.

Until now, that is. Europe is about to get its first commercial taste of 5G-based "edge" computing, courtesy of a tie-up between mobile operator Vodafone and Internet giant Amazon. Set for launch in the UK next spring, with a 2021 service also due in Germany, it promises at least a fivefold reduction in latency. That could help 5G discover its mojo.

The forthcoming offer is possible thanks largely to an Amazon technology called Wavelength, which Vodafone will host in application servers at appropriate facilities. A data signal would normally take anything between 50 and 200 milliseconds to make a round trip on Vodafone's mobile network. Using Wavelength, that journey time can be cut to less than 10 milliseconds, it says. 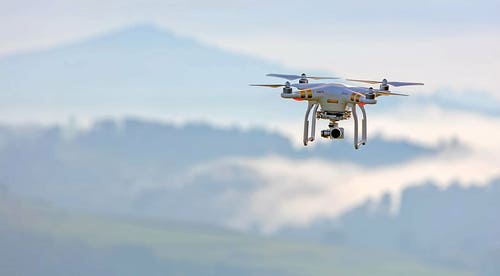 A menace to airports no more? Edge computing could provide warnings of drone activity.

Distance has previously caused delays, according to some technology experts. Regardless of any 5G developments, the big data centers that host IT and network resources might be hundreds of miles from users in some countries. The entire concept of the "edge" is about distributing these resources around the network so that signals do not have as far to travel. In March last year, BT, the UK telecom incumbent, revealed plans for a distributed cloud initially targeting about 100 metro locations.

Yet Vodafone and AWS reckon they can achieve sub-10-millisecond latency with far fewer edge facilities. Using a Wavelength-equipped center in London, Vodafone says it has already recorded a round-trip time of less than 10 milliseconds between Newbury, the location of its group headquarters in southern England, and Birmingham, about 90 miles north. That means the whole UK could feasibly be served from just a handful of centers.

Scott Petty, Vodafone UK's chief technology officer, has long dismissed suggestions the UK would need hundreds of edge facilities to handle low-latency services. "I think that is wishful vendor thinking," he told Light Reading in March last year. Back then, his estimate was that about eight UK data centers would be sufficient for nationwide latency of between 15 and 20 milliseconds. Even lower levels with even fewer facilities now seem possible.

The evidence will come next spring, when Vodafone is promising a commercial service that covers areas in and around London but also extends to Cambridge, Oxford, Birmingham, Bristol and Cardiff, as well as towns and businesses along the M4 motorway, which connects London to Wales and the southwest.

Several application developers have already been named. They include Dedrone, which warns airports of drone activity, Digital Barriers, which provides video analytics for cameras worn by emergency-service workers, and Groopview, whose technology aids voice communications over streaming video platforms.

Also identified in today's announcement is HERE Technologies, the mapping specialist that Finland's Nokia sold to carmakers in 2015. It is working on a real-time hazard warning service that could improve road safety. Unleash Live, the fifth developer named, boasts a video analytics platform that city authorities can use to snoop on citizens, although the message is all about "public safety needs."

Privacy concerns aside, this is a rare opportunity for the UK to establish a lead in 5G edge computing over other countries. Few European operators have made any significant progress so far, and none appears to have announced a commercial offer. The availability of one in the UK, it is hoped, will enthuse software developers and stimulate innovation. From early 2021, Vodafone and AWS say they will also run an innovation program that allows developers and businesses to experiment with edge technology.

But there will probably not be a marketing frenzy to accompany the launch. Vodafone seems likely to proceed cautiously into this new business area, and details about the pricing of services and the commercial arrangements between the operator and AWS are still unclear. Rivals will be watching closely and adapting their own edge plans based on Vodafone's early experiences.

If all goes well, this could be a major spur for Amazon in the nascent mobile edge market. It first announced an edge tie-up with Vodafone this time last year, when KDDI (Japan), SK Telecom (South Korea) and Verizon (US) were also unveiled as partners. As those operators switch on their first edge services, Amazon's big tech rivals have little to show for their efforts so far.

Other IT companies might also be unhappy about Vodafone's push. A sub-10-millisecond service delivered from a few edge facilities, rather than hundreds, means less work and investment for Vodafone. But that translates into less business for some vendors. Next year may show who has been guilty of wishful thinking.