Watching a violent collision in ice hockey makes a lot of people flinch. A few years ago, it made Peter Husemeyer immediately want to know just how bad the impact was. That moment was the genesis of Sportable, the sports technology and analytics company that Husemeyer co-founded in 2015. It now looks set to be one of the first organizations that will make use of a new "edge" service developed in the UK by Vodafone and AWS.

Vodafone had teased news of the service back in December. It takes advantage of an AWS technology called Wavelength, designed to shorten the journey time for a data signal on the Vodafone network. On a standard mobile network, this "latency" can be anything between 50 and 200 milliseconds, which can be excessive for Sportable and other application developers. Thanks to Wavelength, Vodafone now reckons it can slash latency to a just a fraction of that time.

It does this by cutting out some of the "hops" that a mobile signal would normally make, says George Elissaios, the general manager of AWS Wavelength. Normally, these would travel back and forth between big data centers that might be far away from the actual user. Wavelength means all the data processing takes place more locally. There is no need for a long-distance journey. 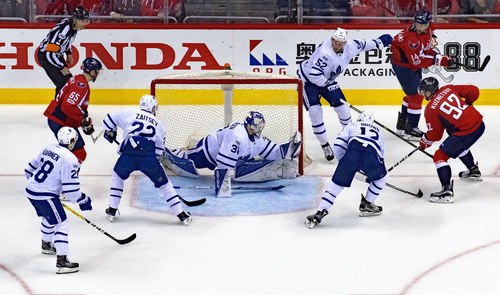 Collisions in ice hockey gave Sportable's co-founder the idea for his company.

Low latency is a must for Sportable partly for reasons of fan engagement, says Husemeyer. Statistics on player collisions and other sports metrics have greater value when they are instantly available. Match officials, moreover, increasingly need data immediately to hand as they rely on technology to make decisions. "With Wavelength, it is fast and reliable, and we are very happy about that," says Husemeyer.

But speed of application delivery is not the only benefit he appears to have seen. Sportable's employees are used to lugging around their own server equipment and operating in a jungle of fiber-optic cables at stadiums. "We can get rid of that now and know someone more capable is providing us with infrastructure at the edge," says Husemeyer. "We don't need to worry about cables because we have a 5G connection and don't have a latency hit." Scrapping equipment and not having to worry about tripping over cables means deployment teams can be smaller and more specialized, too.

This is a compelling advert for the Wavelength service, which explains why Husemeyer featured prominently during a press conference with reporters about the launch. Nor is Sportable the only application developer named in Vodafone's release. Others are Aurrigo, the provider of a self-driving bus service at Cambridge University; Keyless, a security firm that reckons Wavelength can speed up authentication; and Xpllore, which is developing virtual reality applications for use in education.

Perhaps the best known of the bunch is Interdigital, a research company that owns some of the patents underpinning 5G technology. It appears to have used Wavelength to help detect faults on a production line for a factory automation service and to remotely steer a vehicle around the factory floor.

Few if any of these scream mass market appeal, however, and that does raise some doubts about the sales opportunity for Vodafone's business unit, which made about 12 billion ($14.6 billion) in revenues last year. Any revenues generated by Wavelength will presumably have to be shared with AWS, even if this is just Vodafone paying AWS for the technology it provides. In the US, Verizon advertised its own set of Wavelength services as far back as December 2019, and yet sales at Verizon Business fell 1.5% last year, to roughly $31 billion. At AWS, they soared 30%, to nearly $45.4 billion.

On the plus side, Vodafone believes it can deliver a nationwide low-latency service with just three or four Wavelength zones, minimizing the future investment needs. It can make do with such a small number of facilities thanks largely to previous investment in Redstream, the fixed backbone that links Vodafone's sites to its core network, says Jennifer Gill Didoni, the head of the cloud portfolio for Vodafone Business.

The service launched today is available across London, the surrounding areas and various other UK cities and towns, including Oxford, Cambridge, Bristol and Cardiff. But Vodafone plans to extend coverage to Scotland and parts of northern England next year.

Still, the actual latency is probably not going to be the sub-10 milliseconds the industry often trumpets as a target. While that level is feasible between the basestation and the core, the radio link from the basestation to the user would add some delay on top. The important tipping point for now is 40 milliseconds, says Gill Didoni. Above that level is "when eyes and ears perceive a lag in mixed-reality and gaming services," she says.

Husemeyer reckons Wavelength has reduced latency by a factor of at least six and that further improvements are possible. So far, it means average latency has dropped from 221.87 to 36.55 milliseconds, putting Sportable just below that 40-millisecond level that Gill Didoni deems so important. Interdigital, meanwhile, says it recorded an average end-to-end latency of only 15 milliseconds during its factory trials.

Operators have done a good job of monetizing gigabytes and connection speeds ever since mobile data services became a thing. If they can do the same for milliseconds, and enough companies see the benefits, the edge could be something worth shouting about.