Vecima Networks has acquired the intellectual property (IPR) that ATX Networks has developed for a Generic Access Platform (GAP) node enclosure that can support an array of standardized service modules that will snap in like Lego bricks.

The general driver here is to accelerate the market for a GAP node based on standards being developed by an SCTE/ISBE working group involving a mix of vendors and suppliers. The GAP node, a project largely being championed by Charter Communications, is focused on a common node enclosure outfitted with standardized interfaces for modules powering multiple access network technologies, including DOCSIS, PON, 4G/5G, mobile backhaul services and, potentially, edge compute.

Financial terms were not announced, but the deal hands Vecima ATX's drawings and schematics as well as early prototypes for a GAP node enclosure. Vecima has also agreed to license the IPR back to ATX (should ATX decide to pursue GAP products down the road) and to publish the GAP node specs through SCTE/ISBE at no cost. 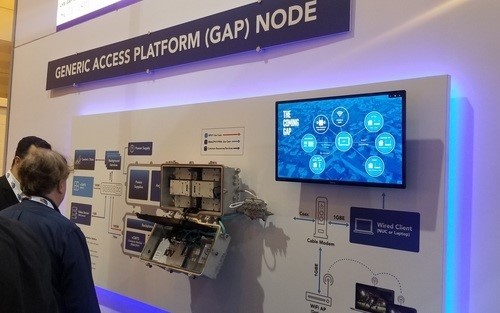 That, he said, fits with Vecima's broader focus on supporting a new distributed access architecture (DAA) being pursued by cable operators that will enable them to deploy key electronics toward the edges of the network as they push fiber deeper. Vecima recently expanded the DAA piece of its product portfolio via the acquisition of Nokia's cable access portfolio, including Nokia's EPON and DOCSIS Provisioning over EPON (DPoE) technologies.

McCreery said the acquisition of ATX's GAP tech was partly driven by the fact that it's become clear that cable operators prefer to have a sole supplier handle the integration and testing for a GAP node rather than assembling and integrating the requisite piece parts  from the enclosure to the modules  themselves.

He also acknowledges that publishing the specs will effectively enable competitors to enter the GAP fray to an extent, but believes it's also a necessary move to help accelerate and diversify the market.

Jeff Heynen, vice presidents of broadband access and home networking at Dell'Oro Group, agrees that the deal makes strategic sense because it keeps Vecima focused on all aspects of DAA while keeping ATX centered on the parts of the outside plant it's targeting for next-gen HFC networks, namely amplifiers, passives and taps.

"If they're going to address the outside plant at the node, that's obviously where Vecima believes their sweet spot is going to be," Heynen said.

The deal also represents another aggressive move by Vecima as it looks to secure more turf in a cable access vendor market that's in a state of flux – CommScope is now evaluating its entire portfolio; Cisco recently folded its cable access unit into its mobile division; and Casa Systems now views wireless and telco wireline, rather than cable access, as its primary growth engines.

Chris Bastian, SVP and chief technology officer of SCTE/ISBE, said gaining access to the GAP IPR will accelerate standards work and remove some unknowns for vendors that will be making GAP node enclosures and modules.

"It's a huge step forward, a major milestone in the overall project," Bastian said. "We needed an entity in the working group to step forward and develop those drawings. It was fundamental to implementing the standard and basically going from paper to  a physical enclosure."

For ATX, the Vecima deal follows more than two years of development of a standardized GAP node, including some initial work with partners such as Cisco, Intel, Applied Optoelectronics and Silicom Connectivity Solutions.

The GAP standards are still in development and being modified. Dan Whalen, ATX's CEO, said the time was right to work out a deal with Vecima, which had other key pieces of the puzzle, to ultimately speed up development.

"We thought, for the industry, it would be better off being in somebody's hands who has the requisite DAA products, both from a time-to-market [perspective] for the cable operators, but also integration testing and all of the things that have to happen with those components inside of the GAP node to get the product deployed and operational," Whalen said.

ATX still has bridge to GAP

But the licensing piece of the deal still gives ATX a path to a GAP node as operators pursue DAA and the targeted deployment of PON. Whalen said ATX is in talks with operators and other partners about building the node and the components that would go inside, including RF "bricks" that would support Extended Spectrum DOCSIS (ESD), an element of DOCSIS 4.0 that will enable operators to upgrade their usable spectrum to 1.8GHz.

Whalen said the move will also allow ATX to concentrate on other aspects of the HFC plant, including the optical transition, it's more focused on today. That work includes amps, passives and line extenders for 1.2GHz and 1.8GHz upgrades, including products based on a license for Cisco's GainMaker line.

Whalen also sees some potential opportunities following the Rural Digital Opportunity Fund (RDOF) auction, noting that ATX has some products that could provide a good fit for cable operators, particularly with respect to long haul optics.

He also expects activity to pick up for ATX's video/media distribution unit focusing on the hospitality and small/midsized business market as COVID-19 restrictions lift and operators push ahead with IP delivery system upgrades for those customers.