The time I visited a Dish 5G cell site

LAS VEGAS  This week, I made a call on Dish's 5G network here. I called Dave Mayo, the Dish executive in charge of building the company's network. After the call, we visited one of Dish Network's nearby 5G cell towers.

This is the story of what I saw and what I learned. If you're looking for the TL;DR version: The quality of the call on Dish's network was fine. And it provided speeds around 250 Mbit/s. 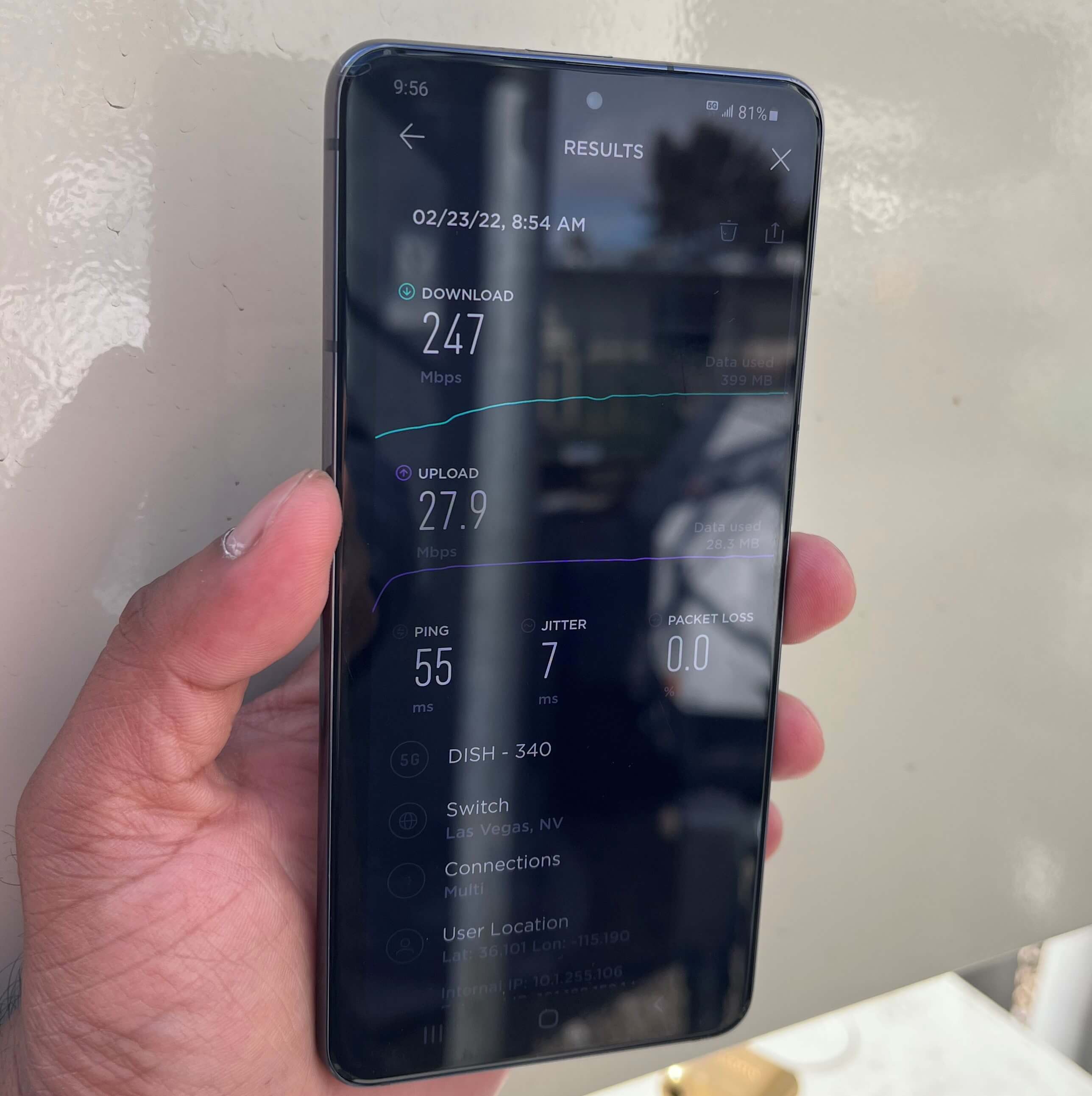 A Dish technician conducted speed tests on the company's 5G network in Las Vegas using a Samsung Galaxy S21. Company officials acknowledged that speeds might decline as customers load its network, but countered that Dish has lots of additional spectrum bands it can add to the network to raise speeds as necessary. Click here for a larger version of this image.
(Source: Light Reading)

I was in Las Vegas this week for the NATE Unite conference. NATE is the trade association that represents the nation's cell tower climbers, and its Unite trade conference this year attracted a record 2,500 attendees. A big draw was a Wednesday keynote appearance by Charlie Ergen, Dish's chairman and the architect of the company's big 5G gamble.

On Wednesday morning, a few hours before Ergen's keynote, I got a surprise call from a Dish representative: Did I want to take a tour of a Dish 5G cell site in the next 15 minutes? I dropped everything and jumped into a nondescript minivan for a quick drive to one of the roughly 150 cell sites that Dish currently operates in Las Vegas. My tour guide was Mayo, who asked if I wanted to make a test call on Dish's brand-new network on the way there.

Oh sure, I said, trying not to sound too excited.

Mayo handed me his Samsung Galaxy S21 and explained that Dish's network in Vegas currently runs across three spectrum bands: Band 71 (600MHz), Band 66 (AWS) and Band 70 (AWS-4). Dish does own licenses in other spectrum bands  from 3.5GHz CBRS to 3.45GHz-3.55GHz  but hasn't yet deployed the radio equipment necessary to put them into action.

The 600MHz spectrum licenses Dish bought for around $6 billion in a 2017 FCC auction form the core of Dish's 5G coverage footprint in Vegas and elsewhere. In that respect, Dish is using the exact same 5G strategy as T-Mobile, which first built a 5G coverage layer with its 600MHz licenses in 2020 and is now supplementing that with the 2.5GHz spectrum it acquired from Sprint. Mayo's Galaxy S21 supports Dish's Band 66 and Band 71 spectrum holdings, but Dish hasn't yet announced any devices that support its unique Band 70 holdings.

Regardless, my call didn't go through on Mayo's Galaxy S21. Instead, I used the S21 of another Dish executive  Suman Sharma, wireless senior manager  whose phone was properly configured for calls on the network.

The call connected quickly and the quality of the call was fine. And while that doesn't sound like a major accomplishment, it is. That's because my call from Sharma's phone connected to a nearby Fujitsu open RAN radio (no other 5G provider in the US supports Fujitsu or open RAN) and it did so via Voice over NR (VoNR) technology. VoNR (pronounced "voner," which is hilarious, I know) is a brand new technology that pushes voice calls over 5G, and Dish ought to be the first operator in the US to launch it commercially. Verizon, AT&T and other 5G operators in the US currently use their legacy 4G networks for voice calling.

Then, after Fujitsu's radio connected my VoNR call, my brief conversation with Mayo traveled through a completely virtualized, cloud-native, software-defined network architecture supported by vendors such as VMware, Mavenir and Amazon Web Services (AWS). This, too, is completely unique. The difference between Dish's 5G network and the networks of operators like T-Mobile and Verizon is sort of like the difference between a Tesla Model X and a 1986 Ford Tempo  they'll both get you from one place to another using wheels, but the technologies they rely on to do so could not be any more different.

Peeking under the hood

But don't just take my word for it. Take a look at this Dish cell site in Las Vegas and check it out for yourself: 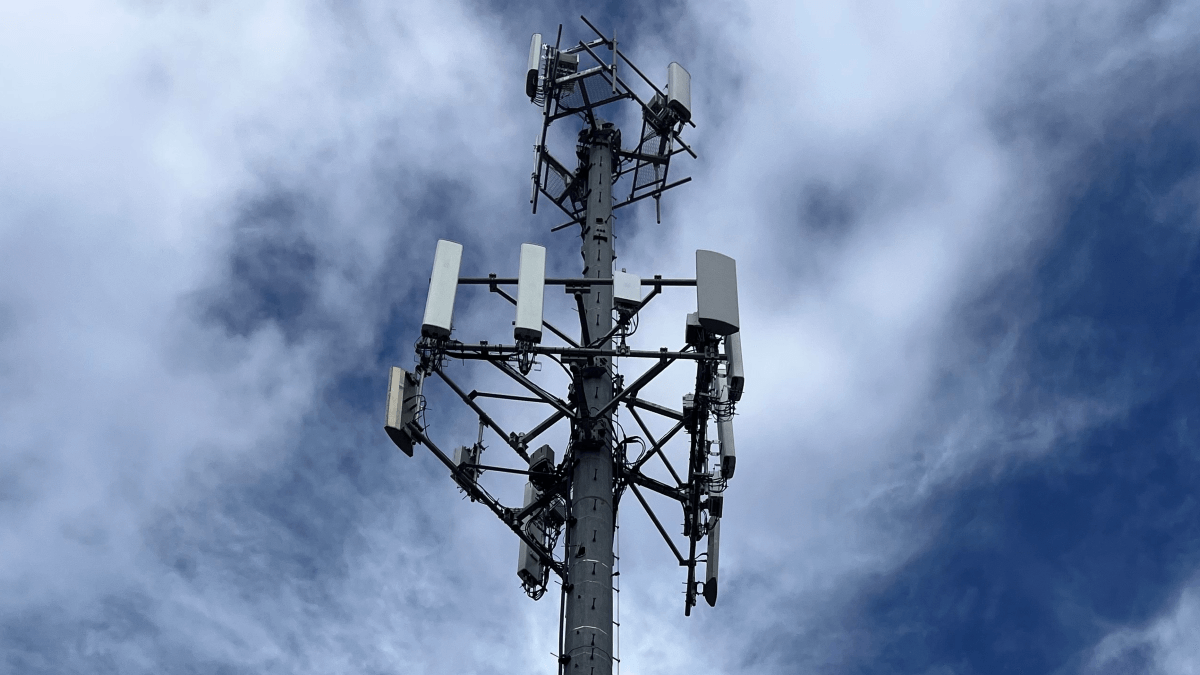 Dish's Fujitsu radios and JMA antennas sit at the very top of this tower, which is owned by cell tower giant American Tower. Because Dish is using open RAN, it can mix and match equipment from a variety of vendors (Dish's other radio vendor is MTI and its other antenna vendors include CommScope, CellMax and KMW). The ring of radios below those from Dish are for Verizon. Like AT&T and T-Mobile, Verizon uses traditional 5G equipment from big vendors like Samsung and Ericsson that generally cannot be mixed and matched. Click here for a larger version of this image.
(Source: Light Reading)

To be clear, Dish's 5G radios look a lot like Verizon's radios. Verizon has more radios on this tower because its network stretches across more spectrum bands, including its newly deployed C-band holdings (there are C-band radios on this tower). Further, Mayo explained that Verizon's radios are lower on the tower because Verizon has split up this particular cell site into multiple spectral chunks, or "cells," to support more customers.

But the truly unique part of Dish's 5G network is located at the base of its cell towers. 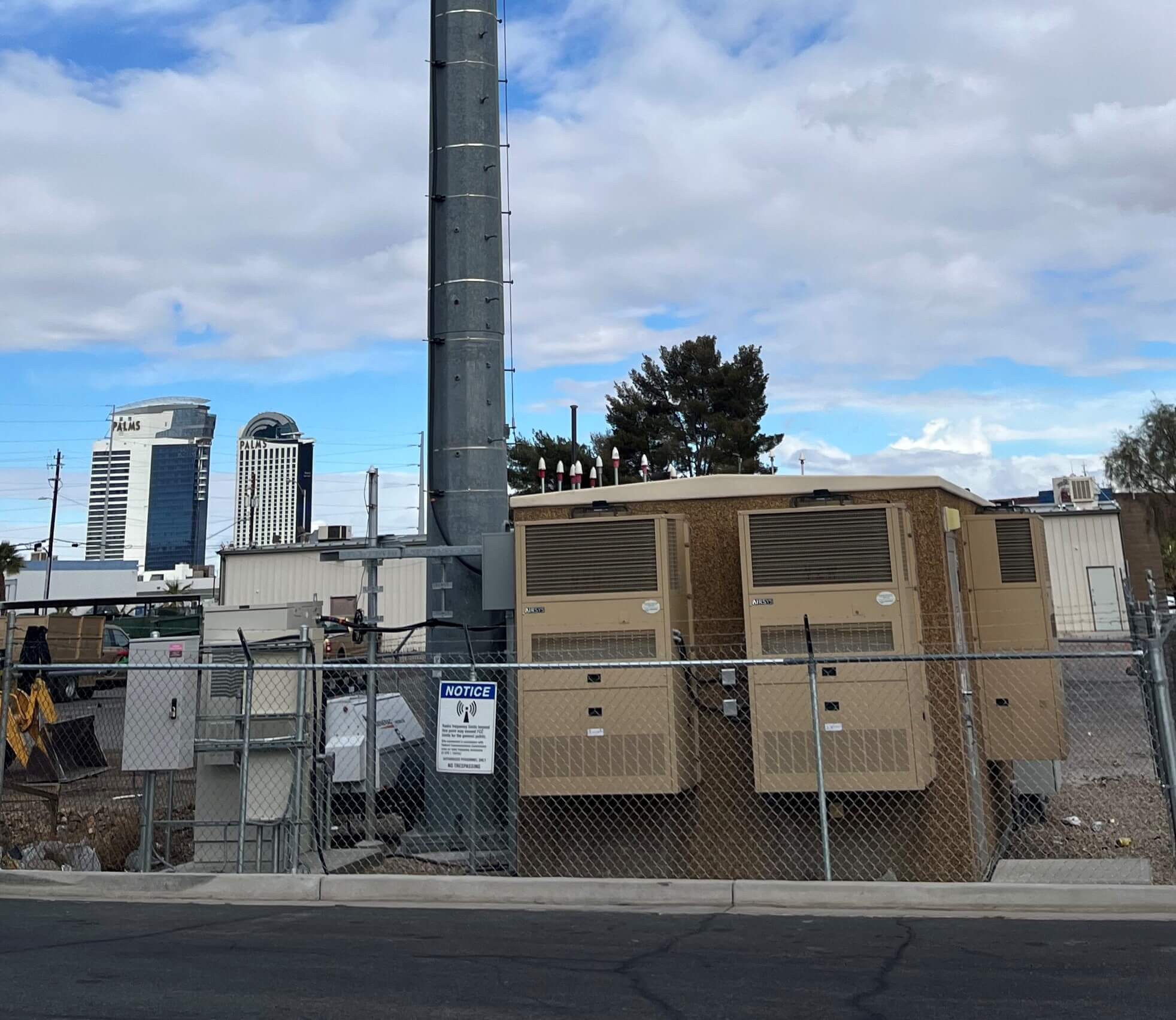 If you've come this far, stick with me because we're about to get real nerdy.

Here's a series of pictures showing the inside of Dish's baseband cabinet: 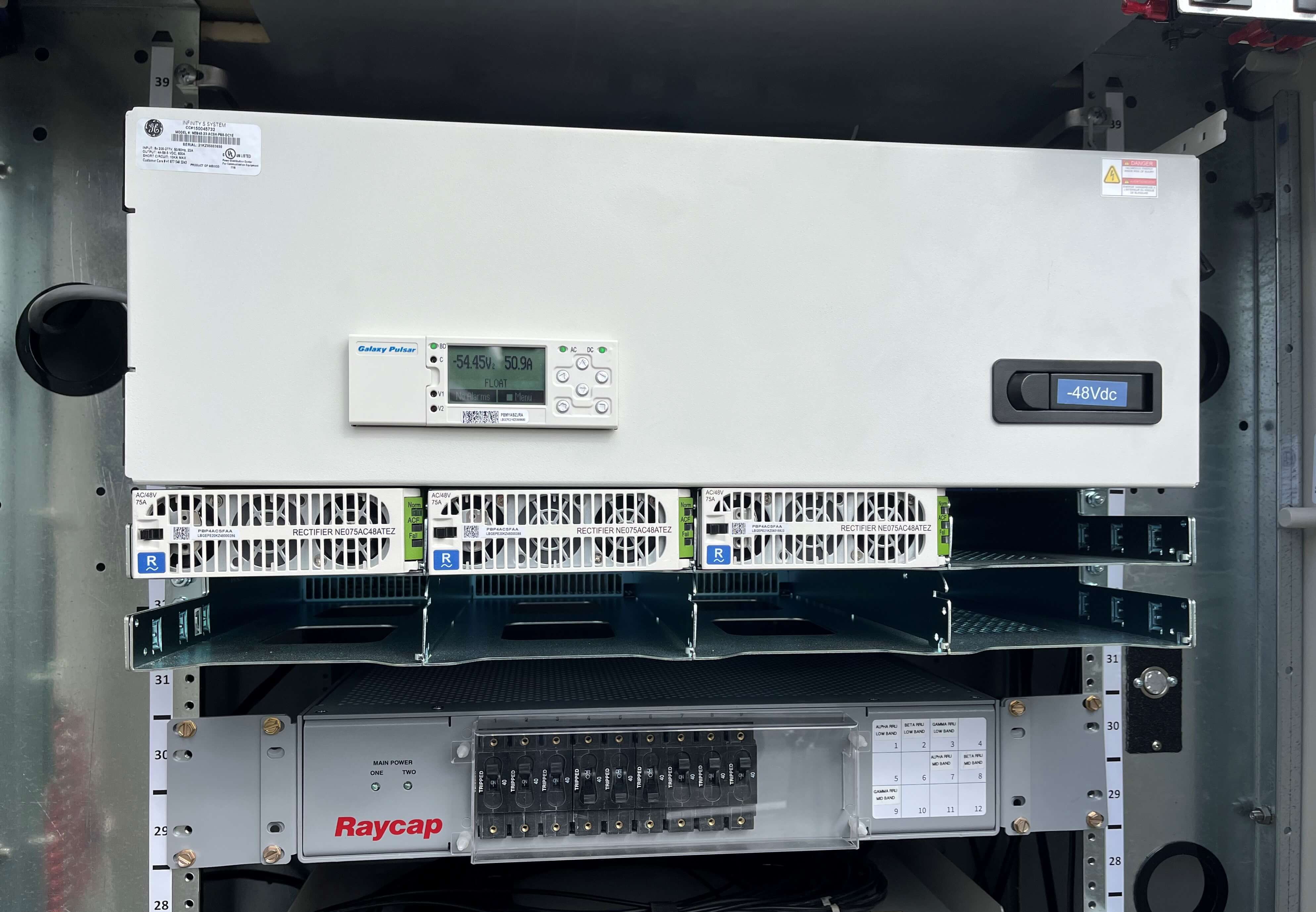 At the top of the cabinet is a box that mostly handles power management.
Click here for a larger version of this image.
(Source: Light Reading)

In the middle of the cabinet is a router from Cisco. Mayo said that the router remains a necessary piece of equipment today, but he expects it to be replaced by software in the next 5-7 years. He said that Dish's switches  which historically have been massive pieces of critical equipment  run exclusively in software.
Click here for a larger version of this image.
(Source: Light Reading)

Finally, the "brains" of Dish's 5G cell site, its baseband software, is located inside this Dell server that sits near the bottom of the company's cabinet (with some space below it for additional servers as necessary). Mavenir's radio management software runs inside the server, where it is managed by a VMware platform.
Click here for a larger version of this image.
(Source: Light Reading)

Mayo explained that the network traffic collected by this cell site is shunted through a speedy, third-party dark fiber network to a data center owned by The Switch that's roughly 7 miles away. That distance is important because it partly determines network latency, or how snappy users' connections are. "We've been very mindful ... so that you have low latency," Mayo said.

Dish's Sharma explained that the nearby data center serves as Dish's "distributed unit," or DU, for this particular tower site. Dish sometimes rents space inside third-party data centers for its DU equipment. In this case, Dish's DU in Switch's data center spans roughly four cabinets of servers. Dish's transport vendors like Zayo and Crown Castle can then connect into such data centers, thus allowing Dish to shuttle its customers' data to and from the wider, global Internet. Sharma said that, in locations where Dish doesn't have access to a dark fiber connection, it positions its DU equipment at the base of its cell sites and then connects those locations through slower, lit fiber connections to nearby CUs, or "central units," that can also serve as connections to the wider Internet.

Mayo declined to discuss the number of DUs for each CU. "We're still learning," he said of the network's design parameters. "I want to load test the stuff."

Importantly, Mayo said that there's currently no AWS equipment or software located in Dish's DUs. Instead, the company's network design for this particular site connects its DU to its CU that is in an AWS "Local Zone." From there, the traffic passes to Dish's core functions running inside an AWS "Region." Mayo said that Dish works closely with AWS to ensure that its customers' traffic and Dish's core network functions are routed and managed effectively. That's noteworthy considering Dish has been somewhat vague about the exact role that AWS will play in its 5G service  though company officials have said AWS ought to help Dish sell its connectivity to enterprises.

Dish executives had hoped to commercially launch the company's Vegas network by the end of last year, but the company missed that goal. Mayo said that the situation was due to various factors, including ongoing testing of 911 services.

"I think we underestimated the extent of the development," Mayo said. "We are in pretty good shape now."

Here are some other tidbits I got out of my site visit:

Mayo and Dish's other networking executives are clearly proud of what they've accomplished so far, and they're looking forward to showing it off. They continue to argue that they're on track to light up thousands of similar cell sites around the country in the coming months. Mayo said that Dish would exceed its federally mandated deadline of covering 20% of the US population with 5G by June.

Ultimately, Dish's stated goal is to operate a 5G network that would directly challenge some of the biggest and most entrenched telecom providers on the planet. That's certainly a tall order, and there's no telling whether Dish will be successful. But at this point, it's hard not to root for a company that is clearly an underdog with big ambitions.