EdgeConneX in action
One obvious player in this segment is EdgeConneX Inc. , which has been building edge data centers for some time and continued to look for sites at which to build smaller data centers, initially for content, serving both Internet giants and cable operators, primarily. In an interview earlier this year, Phill Lawson-Shanks, chief innovation officer for EdgeConneX, said that his company absolutely would leverage its heritage in building data centers to serve this smaller edge, even as it also scales up some of its original "edge" locations to be much larger campuses.

"We have access rights to thousands of buildings in North America and we have the innate knowledge and experience of how to deal with the multiple municipalities to penetrate buildings, get rights of way, etc.," he commented.

That expertise includes building its electrical rooms in containers that can easily be dropped into a site, turned up and then scaled up, to reduce the build cycle time to days, Lawson-Shanks said. EdgeConneX also has its own Edge OS, built to monitor a lights-out data center and designed to scale up to a campus build or down to "manage something the size of a mini-fridge," he added. "So it can sit on a cell tower, on top of a building or inside a building."

These distributed sites "are the perfect location for up-to-the-minute content for search engines, content providers to put microservices down there in caches," Lawson-Shanks noted, and can also be the aggregation points for the many more 5G antennas that will be required. 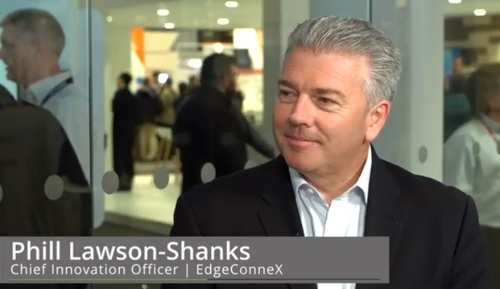 "The challenge that a lot of the people professing to be micro edge providers is that, to get an enclosure and put it on a piece of land is pretty easy," he said. "The difficulty is maintaining the integrity of that enclosure -- the security, the environmentals. That is the hardest part of it."

Schneider Electric's Reele agrees that there will be fundamental differences in these new edge data facilities with which the industry is still grappling. He believes his company has the expertise to share there as well.

"Data centers have been forever engineered for humans to be in them -- security guards, IT professionals, electrical professionals, mechanical professionals, Reele notes. "If we are going to go to all the cell towers, hypothetically, there is going to be one at every tower, that's 250,000 locations -- do you think we are going to put a security guard at every one? An IT guy at every one, a mechanical/electrical guy? Therefore, the autonomous edge requires the different engineering, a different operational and a different maintenance model in order for it to be maximized efficiency. We think we are a world leader in understanding and developing the entire model, the lifecycle model of the autonomous edge."

DHagar 8/8/2018 | 5:01:44 PM
Re: The Great Edge Computing Land Grab Printable Calendar @miles.m, there you go!  That is exactly what I believe will develop are new "networks".  Thanks for example.  Plus, I believe the communications service providers will play a role - so we will have infrastruction, connection, distribution, and services.

It will be a new landscape!

I believe the answers will evolve into a hybrid.  There must be a foundation for existing locations (ie, cities), but "connected" in new and different networks.  I believe that is the opportunity for new relationships and models to form between infrastructure and service providers, and public/private partnerships?
Reply | Post Message | MESSAGES LIST | START A BOARD

kq4ym 8/7/2018 | 8:25:43 AM
Re: The Great Edge Computing Land Grab Location, location, location seems to still be holding up even in the world of computing and internet. While it's noted that "the arms race is basically on real estate right now," it will be interesting to see how local governments react to the demand for more commercial uses of buildings and locations needing access for antennas and infrastructure that wasn't contemplated when zoning and building regulations were originally put into place decades ago.
Reply | Post Message | MESSAGES LIST | START A BOARD

DHagar 7/26/2018 | 5:59:17 PM
Re: The Great Edge Computing Land Grab Carol,  outstanding.  The view from towers will be interesting.  That is very true on his broad view.  I am beginning to believe there will be new roles and interrelationships as the edge computing is applied and deploys 5G, IoT, etc.

Thanks for great information and keeping us in the current know!
Reply | Post Message | MESSAGES LIST | START A BOARD

Carol Wilson 7/26/2018 | 11:31:16 AM
Re: The Great Edge Computing Land Grab Thanks. The thing I like about Joe Reele is that he has not particular axe to grind on how this all happens, since Schneider Electric is a vendor to just about everyone in this ecosystem. I thought his perspective was very valuable.

Right now, every conversation on edge computing with the different players seems to go off in a new direction. So much is happening that it's hard to track. Today I'm talking to some tower folks to get their views.

Excellent and timely article.  I'm not going to jump in to the semantic arguements of what and where the edge is.  However, if an application's edge needs a bunch of CPU's it needs a roof (and HVAC, Security, ...) or at least an environmentally hardened enclosure.  Hence, it's real estate.  Who happens to have real estate in most city centers? The ILEC/PTTs.   How they play their RE cards should be interesting to watch.

Great blog and outline of the "changing" landscape and bi-directional networks that are resulting.  The is more that we don't know, in that the future will be played out in different models, etc., than what we do.

Thanks for keeping us informed.