The edge remains a sad story for the telecom world

LONDON  The Edge Event  Intel's Renu Navale is refreshingly candid about her company's interest in the "edge," a vague expression for hosting IT resources anywhere bar one of the large data centers where they are traditionally found. "From an Intel perspective, the silicon opportunity is worth $65 billion," the general manager of Intel's edge computing business told attendees at The Edge Event in London this week.

The $65 billion appears to be Intel's estimate of "edge silicon" revenues in 2024. To put that in context, overall semiconductor revenues came to $595 billion globally last year, according to market-research firm Gartner, while Intel reported sales of about $79 billion in its last fiscal year. Sprinkling server equipment across the planet equals big business for the US chipmaking giant. 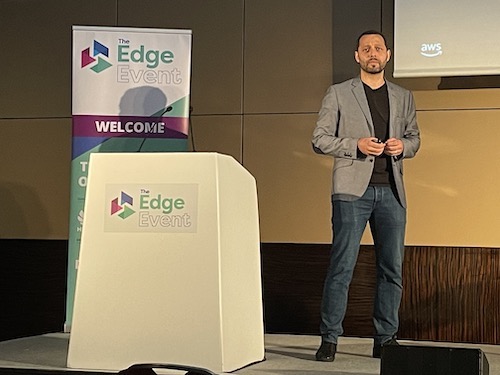 Hisham Elshaer of AWS on stage at Informa's edge event in London.
(Photo by Iain Morris)

It could be similarly lucrative for titans of the public cloud. AWS, the biggest, made an astonishing $62.2 billion in revenues last year, an increase of $16.8 billion from the previous one. Today, most applications sit comfortably in large data centers, benefiting from the "hyperscaler" economies and tools that AWS provides. But AWS is betting on a greater need for more local processing. In some instances, "it doesn't make financial sense to move data to the cloud and back," said Hisham Elshaer, a global senior consultant at AWS. "In other cases, there are hyper-reliability and throughput needs" that justify the use of local facilities, he explained.

AWS has, accordingly, been expanding outside the large data center, either deploying its systems in premises owned by AWS partners or investing in new facilities. In a property category it describes as "fulfillment, data centers and other," AWS either leased or owned 525,691 square feet last year, up 31% from the previous one. "We are actively building local zones to penetrate and distribute cloud capabilities even more," said Elshaer. "They are in the tens now and will be in the hundreds very soon."

The story so far is less wholesome for the telecom operators that have talked up the edge as a growth opportunity for years. The world's best-known telecom brands have largely abandoned any pretense of being able to compete against AWS, Google Cloud and Microsoft Azure, instead becoming connectivity partners to Big Tech. A few weeks ago, Germany's Deutsche Telekom sold its controlling stake in MobiledgeX, originally touted as a telco industry standard for middleware, to Google Cloud. A killer app for the telco edge remains elusive.

That has not stopped operators from talking about the rollout of edge computing at hundreds or even thousands of central offices and other facilities. "The access and the core need to be placed in locations close to the customer," said Juan Carlos Garcia, the senior vice president of technology innovation for Spain's Telefónica. "We have thousands of central offices, and these are natural places for the edge."

Shortening the distance between facilities and end users would cut "latency" (a signaling delay on data networks) to millisecond levels, goes the argument. Anything more and future users of the metaverse would feel like cruise ship passengers on a rough sea crossing. But without a radically new business model, the metaverse as that elusive killer app sounds like an expensive overhaul for the telco sector rather than a fresh source of income.

Operators including Telefónica are hopeful that rearchitecting their networks will lead to cost savings and other efficiency benefits. Edge facilities could, for instance, be used to host and consolidate the baseband equipment normally found at the bottom of a mobile site. But this would require a huge investment in "fronthaul" connections back to the radios for operators that have not already deployed much fiber.

In the meantime, there is little sign of telcos enjoying any revenue boost from their edge activities so far. Omdia, a sister company to Light Reading, expects the market for edge services to generate revenues of $214.1 billion in 2026, up from $79.2 billion last year. However, network services account for a relatively small portion of these figures. Partnerships with hyperscalers mean sharing edge revenues and perhaps not even being visible to customers.

Edge progress has been typically slow at Vodafone. The operator is one of several to have deployed Wavelength, a technology AWS developed specifically for use in telco networks. Far from operating hundreds or even tens of Wavelength facilities, however, it runs just one site in the UK and three in Germany. It has also previously voiced skepticism about the need for dozens of facilities, arguing it can meet UK latency demands from several sites.

Even this limited deployment makes it the operator with the second-highest number of Wavelength sites, behind US-based Verizon, according to Elizabeth Rumsey, a senior global product manager for Vodafone Business. A year since it launched the Wavelength service in the UK, it can boast 30 "use cases" for the technology. But if any of these are commercial, they have either failed to buoy revenues or merely offset a sales decline elsewhere. Vodafone Business generated about 10.3 billion ($10.7 billion) in sales last year  an organic increase of just 0.8%.

Vodafone clearly does not want to be limited to a connectivity role. Across the entire organization, it aims to add another 6,000 software engineers to a team numbering 9,000 today. Some of them will be set to work on writing applications it hopes to sell. As for edge computing, Vodafone is making what Rumsey calls "focused bets" in areas including mixed reality and visual inspection. Few investors will be holding their breath.