To understand the industry, technology and application evolutions driving edge computing, Heavy Reading conducted a survey in collaboration with Accedian, Kontron and Red Hat. The survey questioned 82 communications service providers (CSPs) that have launched edge computing solutions or are planning to do so within 24 months. One of the focus areas was the edge platform itself: What do CSPs expect in a platform, including features and cost considerations? Where do they see the most significant challenges from a deployment environment perspective?

The Heavy Reading survey respondents are encountering many challenges in deploying multi-access edge computing (MEC) platforms (see figure below). None of the suggested challenges were discounted; all pulled in votes from at least one-third of the respondents. On the flip side, none were selected by more than two-thirds of the respondents. These fairly homogenized results show much more variation when we look at the results by the demographics of revenue, deployment status and type of carrier. 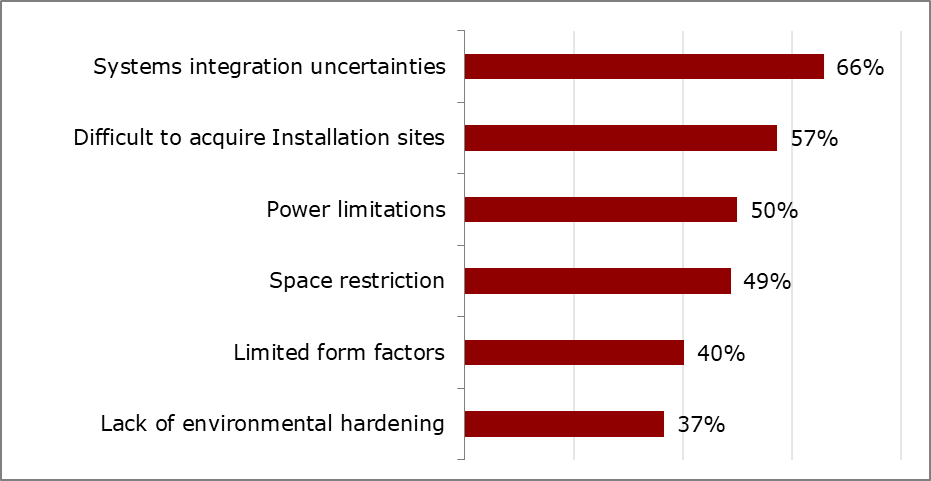 Q: What challenges have you seen, or expect to see, in your edge platform deployments? Select three. (n=82)
Source: Heavy Reading

Systems integration was identified as the most significant challenge. Those respondents that have already deployed MEC evidently learned from experience that systems integration is an even greater challenge than they anticipated; 75% chose it, compared to 60% among the planned deployment population. Conversely, this same population of respondents that have already deployed MEC found space restrictions to be less of an issue (41% compared to 54% for currently planned MEC).

The challenges that have plagued CSPs in small-cell site acquisition will likewise cause headaches for MEC implementations, as the survey reflects. Any edge implementations that require storage and compute resources in an environment other than an existing data center often must be negotiated on a site-by-site basis. Access to power, limited space and customized form factor are part of these negotiations.

Carriers with revenue of over $5bn saw power as much less of an issue than the remainder of the respondents (39% compared to 57%). This can be attributed to a number of factors. Tier 1 carriers have the market heft to negotiate an attractive electrical rate. In the US, that translates to one-half or less compared to the average consumer rate of 10.5 cents per kilowatt-hour. In addition, power concerns may be outside of the sphere of influence of the respondents, particularly among the larger carriers, where formal green initiatives and carbon-neutral goals are planned and tracked by a separate, dedicated organization.

Nobody was more concerned about power than the fixed and cable operators, 78% of which identified it as a concern compared to 47% for the remainder of the respondents. These carriers were also much more concerned about form factor (67% vs. 37%). They are the carriers focusing on smart city deployments  dealing with a wide variety of workloads with highly differentiated traffic profiles and deployment environments.

While large carriers may see power as less of a barrier than their smaller counterparts, they see a lack of environmental hardening as more of an issue (45% compared to 31% for smaller carriers). Carriers looking to deploy storage and compute capabilities at the cell tower, on the roofs of high rise buildings or in residential telco cabinets need hardened and secure enclosures that are cost-effective, particularly when this environment can demand a scale of thousands of edge points of presence.

Heavy Reading's survey results show that carriers have committed to edge computing and are progressing rapidly with implementations. Our survey revealed that the majority of respondents expect edge servers to be up and operational without any hands-on replacements or upgrades for three to five years. The CSPs are deploying, and will continue to deploy, multiple platforms to address their many different implementation scenarios. They are expecting robust and cost-effective solutions from their vendor and integrator partners that enable them to meet complex and variable implementation demands. To gain more in-depth details on service providers' perspectives on edge computing deployment, download and read the full report now: Harnessing Edge Computing for 2022.

This blog is sponsored by Kontron.