LONDON -- 5G World -- Australia's Telstra has been approached by web giants and offered "exclusive deals" to partner on edge services if it restricts its role to that of connectivity provider.

The operator appears to have spurned those offers as it eyes a much bigger role in the market for edge computing, one of the main opportunities associated with the rollout of next-generation 5G mobile networks.

The revelation came at this week's 5G World event in London and highlights the concern that Internet giants may continue their advance into telco territory with the rollout of 5G networks.

Telcos of the World Unite

"I won't mention names, but we've already had exclusive deals offered where they want to provide infrastructure and for us to provide only connectivity," said Channa Seneviratne, Telstra's executive director of network and infrastructure engineering, when asked about competition from Internet giants during a panel session at 5G World. "We don't see ourselves just providing dumb pipes."

The issue has become a sensitive one for some telcos as they try to figure out a strategy for dealing with Internet companies in a future market for edge computing services. "We see the battle starting to play out already," said Seneviratne. "We are working on where we want to have edge computing and identifying the real estate we need. And we need to work now."

With edge computing, network and IT resources normally housed in large data centers would be moved into facilities that are much closer to customers, cutting the distance a signal must travel to reach the Internet. Organizations believe this reduction in "latency" is needed for services like virtual reality (VR) gaming and autonomous driving.

But Seneviratne's remarks show the "edge" is now shaping up to be a future battleground between telecom operators and so-called "over-the-top" (OTT) players.

Some operators believe their ownership of real estate gives them an advantage that Internet companies will not be able to ignore. "Edge is one area where we can put value back into the network," says Paul Berriman, the chief technology officer of PCCW. "OTTs can't get to the edge of the network  For cloud gaming that is a good opportunity to get a foot in the door and a position in the edge and then you partner with cloud providers."

Yet telcos may be wary of such partnerships given the impact that Internet companies are already seen to have had on their business. Asked during a recent earnings call if BT would be willing to let players such as Google and Amazon into its edge, Howard Watson, the UK operator's chief technology officer, declined to answer. "I think that's something that we spend quite a lot of time thinking about and isn't something we're going to comment on at this stage," he said.

A risk identified by Telstra's Seneviratne is that operators could lose edge business opportunities to the Internet firms if they dally. BT has drawn up plans to extend its cloud platforms into about 100 metro locations, and Watson has indicated there are 1,100 fiber exchanges that could potentially double as edge facilities. But to move some of their network functions to the edge, operators will need technologies that are still lurching through the standardization process.

Of critical importance is the next-generation 5G "core." Until that arrives, operators will have to run their 5G radio equipment in conjunction with the existing 4G core. When this "non-standalone" (NSA) variant of 5G eventually makes way for the full "standalone" (SA) version, they should be able to start re-architecting their systems and reducing latency. Yet the more advanced core specifications will not be finalized until March next year. Currently in trials with Cisco, Ericsson and Nokia, BT does not expect to finish moving customers onto the platform it eventually chooses until 2022.

"We'll push ahead with the edge even with NSA because it will take time to get infrastructure out there," said Seneviratne. "Microsoft Azure and AWS want to get out there and go into the edge and they are not going to wait, so are we going to sit back and wait? We don't want to."

That push is despite industry concern on the commercial side. Other than VR gaming on a mobile device in an outdoor setting (which may be a more niche opportunity than operators hope), there are few serious "use cases" for low-latency 5G technology. Self-driving cars could be many years away. Any mention of remote-control surgery usually prompts audience laughter at industry conferences.

Stadia, Google's cloud gaming platform, is a possible example of an edge service that presents little opportunity for telcos. While Stadia's popularity could demand investment in much higher-speed broadband technology, Google will be able to handle the latency requirements with its own network of data centers and global caching system, according to Rudolf van der Berg, a respected management consultant and Internet expert. 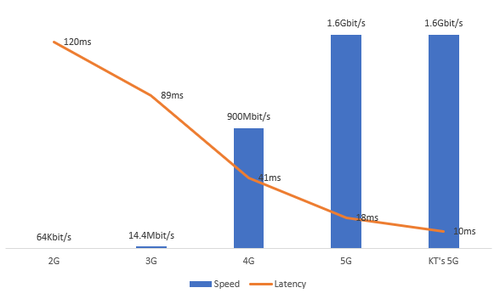 Source: KT. Note: KT claims to have cut latency on 5G from 18 to 10 milliseconds after making investments in edge facilities.

Customer willingness to pay telcos for low-latency services is also in doubt. Latency has fallen from about 120 milliseconds in the days of 2G to just 10 milliseconds on the 5G network of Korea Telecom, a company executive revealed in London this week. But that has not led to any spike in service revenues.

Operators' best bet is perhaps to court business customers and technology partners. Niantic, a games company in edge trials with Deutsche Telekom, might be persuaded to pay the German operator for low-latency guarantees -- effectively sharing its gaming revenues -- although Deutsche Telekom has acknowledged that commercial arrangements are still "up in the air."