Ericsson spends $1.1B on Cradlepoint in strategic shift

Ericsson tore up its enterprise strategy in 2017, when it decided direct sales to businesses might upset telco clients also catering to that market.

Since then, its priority has been to rebuild a mainstream business previously ransacked by Chinese rivals. That has included serving enterprise customers in partnership with telcos.

But a $1.1 billion takeover of Cradlepoint, a US company that sells wireless products to businesses, heralds a departure.

Since taking charge in 2017, he has steered the Swedish vendor back to profitability. But sales to operators have not provided a growth story.

Cradlepoint's market, by contrast, is growing by 25-30% annually, according to Ericsson's estimates. Headquartered in Boise, Idaho, it is seen as a market leader in its field. 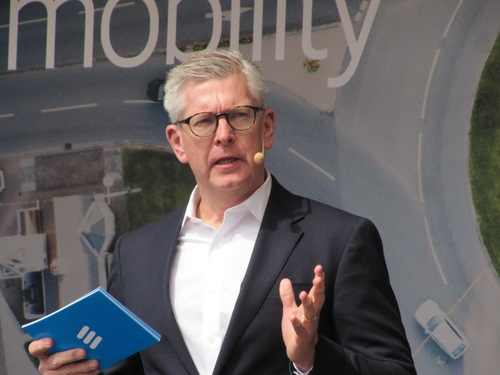 Ericsson's Börje Ekholm has announced the biggest takeover of his tenure.

Any overlap between Ericsson and Cradlepoint is negligible, Ericsson insists.

Cradlepoint sells edge routers and related services to its enterprise clients, while Ericsson's focus is on hardware and software for the wider network.

Asa Tamsons, who leads the emerging business division that Cradlepoint will join, gives the example of an ambulance kitted out with Cradlepoint's technology to connect "people and things."

Following the takeover, Ericsson could add connectivity services for managing an entire fleet of ambulances across a country.

Cradlepoint currently does most of its work in the US, and much of that for the emergency services.

The big pitch to investors is that Ericsson can take its products into new markets, and accelerate the firm's growth, thanks to its existing relationships with about 400 mobile operators globally.

Unlike Ericsson, however, Cradlepoint does not always use service providers as a channel to market for its 20,000 customers. Just ten of its 1,500 channel partners are telcos.

Analysts spot a change in approach. Ericsson has previously been sensitive about protecting its relationships with operators by not treading on their toes, according to David Mulholland, an analyst with UBS.

He says the takeover of Cradlepoint suggests it will begin to serve the enterprise market directly, as it did before the Ekholm era.

Tamsons was quick to play this down.

"Regardless of channels, this is a win for service providers and a win for Ericsson," she said on a call with analysts this morning.

"They have a multi-channel approach. Although there may be only ten partners that are service providers, they generate a substantial part of the volume. A lot of the resellers are also partners of service providers' enterprise arms today."

Nokia, Ericsson's main non-Chinese rival, has had no compunction about cutting service providers out of deals, where necessary.

And some of the world's biggest organizations want to build and operate their own networks. If they have already decided to avoid the telcos, Ericsson should drop them, too.

The hand that rocks the Cradlepoint
Yet the Swedish firm is obviously wary. It plans to run Cradlepoint as an entirely standalone entity of about 675 employees.

That will make it harder to align the two cultures, and realize what businesses like to call "synergies" in areas such as research and development.

It also raises questions about the joint marketing approach the companies will take. And how many service providers that are serious about the enterprise market will happily follow Ericsson's lead and build their strategies around Cradlepoint's technology?

Financially, the deal also comes with a few negatives. With net cash of about 38 billion Swedish kronor ($4.3 billion), thrifty Ericsson can easily fund the takeover.

But it will lower Ericsson's operating margins for 2021 and 2022 by one percentage point, said Carl Mellander, Ericsson's chief financial officer, due to planned investment activity and the amortization of intangible assets.

Cradlepoint will not make a positive contribution to operating cash flow until 2022. Despite all this, Ericsson is sticking by its previously issued profit guidance.

From a revenue perspective, Cradlepoint will hardly make a difference to Ericsson's headline figures. Last year, it made just $140 million in sales, according to Ericsson's statement, and about $85 million in gross profit.

Markets seem to be giving Ericsson the benefit of the doubt, though.

Its share price was up 2% in Stockholm today, at the time of writing, and it is 18% higher than it was at the start of the year, despite the coronavirus pandemic.

The company has undoubtedly benefited from the US-led campaign against Huawei, its biggest 5G rival. Analysts think Ericsson could be the main beneficiary as operators remove the controversial Chinese vendor from their networks.

Still, there is some concern that a more expansionist Ericsson may repeat its mistakes under Hans Vestberg, Ekholm's predecessor, who spent much of his tenure buying firms and moving into adjacent markets.

"We did not really have packaged solutions," said Ekholm today when asked why Vestberg's "industry and society" strategy had failed.

"When you go to market for enterprises you are selling industrialized solutions to many customers, and that is why we need to keep the go-to-market organization at Cradlepoint intact."

Ekholm has already shown he can fatten margins at the mainstream business. The Cradlepoint acquisition will show whether he can also drive new growth.