Besides death and taxes, the two greatest certainties in life today are that news headlines will mention a previously unrecognized coronavirus mutation with vaccine-evading potential and that public cloud companies will continue their unstoppable drift into telecomland. Sure enough, in the same week, the UK's Daily Mail screamed panic about a Nepalese COVID-19 variant and AWS notched yet another telecom conquest, welcoming Bell Canada into its muscular embrace.

It's not as far-reaching a deal as that between AWS and Dish, a US telco-in-waiting that has gone the whole hog and plonked just about everything it can inside AWS data centers. Rather like some other "brownfield" service providers, Bell has for now stopped at the "edge," the term used when applications are hosted not in massive data centers but much closer to the customer. 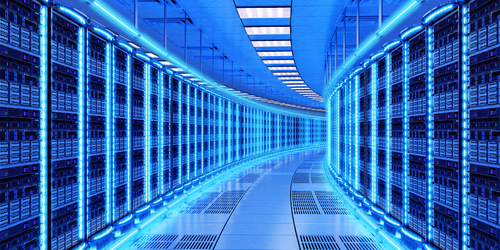 Inside an AWS data center.

A massive data center might, of course, be smack bang next to a customer. But in a country the size of Canada, millions of users could be hundreds of miles from the nearest such facility. That is a long and tiring roundtrip for any mobile data signal, regardless of the underlying technology. By using a bigger number of smaller facilities, operators hope to cut "latency," a measure of the journey time in milliseconds. This reduction, they believe, will give rise to all sorts of whizzy new applications.

So why is it an opportunity for AWS? Largely because the edge is a natural extension of cloud capability. Bell Canada, accordingly, is to make use of an AWS technology called Wavelength, which provides a platform for the developers writing new edge applications. Once it has installed Wavelength at the edge of its network, a smorgasbord of services should follow.

That is the basic pitch, at least. The first big unknown is whether business and government customers  the initial target markets for Bell Canada  have been mewling frustratedly about the lack of edge services. AWS has already announced similar deals with KDDI (Japan), SK Telecom (South Korea), Verizon (US) and Vodafone (UK and Germany), and yet the edge, from a telco perspective, still seems to be all marketing and no action. There is no obvious sign most companies are thirsting for low-latency connections.

The probable explanation is that middling latency is good enough for the applications delivered on 5G networks. There have been too few examples of specific services that would need the Wavelength platform, and Bell's official statement reels off an all-too-familiar list of questionable application genres, including (you guessed it) self-driving vehicles, augmented reality and immersive gaming. Relatively few organizations will require any.

Short on specifics, Bell's statement does not indicate how many facilities will use Wavelength across Canada, although a spokesperson subsequently told Light Reading the company would initially focus on the Montreal, Toronto and Vancouver areas. He also revealed that Bell expects a tenfold latency improvement in edge zones, which roughly tallies with Vodafone UK's estimate that average latency will drop from between 50 and 200 milliseconds to less than 10 milliseconds thanks to Wavelength.

There is something vaguely depressing about these edge tie-ups between operators and AWS. Just a few years ago, it seems, telecom events featured some optimism about the edge and the pivotal role in it that operators and telecom vendors would play. But AWS, Google Cloud and Microsoft Azure increasingly (albeit unsurprisingly) look like the real power brokers and empire builders. AWS already has an edge footprint that covers parts of Asia, Europe and North America.

In the meantime, various telco efforts have flopped. Edge Gravity, Ericsson's answer to Wavelength, fell out of orbit last year. MobiledgeX, a Deutsche Telekom-backed attempt to create a middleware industry standard, appears to be going nowhere. Bell Canada seems to think it deserves credit for having the foresight to land the first Canadian deal with AWS. But there is nothing very original about its move. Google and Microsoft are probably fighting over Rogers and Telus, Bell's two main rivals, in the aftermath.

For good or ill, the public clouds are becoming as irresistible to operators as they are to companies in other sectors. Moving IT workloads and even network functions into the public cloud is a no brainer, as far as some advocates are concerned, and the promised cost savings must appeal to companies burdened by debt, struggling to grow sales and forced to invest heavily in network rollouts.

Bell certainly ticks those boxes. With 28 billion Canadian dollars ($23.1 billion) in net debt, it has strayed outside its own comfort zone for leverage even as it plans to invest up to CAD9.7 billion ($8 billion) in capital expenditure over the next two years, about CAD1.7 billion ($1.4 billion) more than it would normally spend in that length of time. One goal is to bring 5G services to about 70% of Canadians by the end of this year, up from just 35% now. Meanwhile, it has cut headcount by nearly 2,100 jobs, or 4% of the total, in the last two years.

Telcos are visibly worried about overreliance on a few big kit vendors for their radio access networks. Yet hardly anyone seems to be raising concern about future dependence on a few big clouds. A rare exception is a newish report from Andreesen Horowitz, a venture capital firm, which says cost savings from the public cloud are typically ephemeral. Eventually, "the pressure it puts on margins can start to outweigh the benefits as a company scales and growth slows."

Unfortunately, repatriating workloads is easier said than done, warns Andreesen Horowitz. Most companies, it says, "find it hard to justify moving workloads off the cloud given the sheer magnitude of such efforts, and quite frankly the dominant, somewhat singular, industry narrative that 'cloud is great.' " It should be required reading for any public cloud enthusiast.

Update: This story has been amended since it was first published to include feedback from Bell Canada about target geographical markets and latency improvements.