Britain's government has seemed petrified that banning Huawei, as it did last year, will leave 5G operators almost wholly reliant on Ericsson and Nokia, the Chinese vendor's only big global rivals. It explains the government obsession with open RAN, an industry attempt to nurture other suppliers of radio access network (RAN) products. Yet Ericsson, paradoxically, has been allowed a dominant role in the UK's 5G control centers, where any problems could disable an entire network.

The Swedish vendor's latest contract is to provide a 5G "core" to Virgin Media O2, a new-look company formed by the merger between cable giant Virgin Media and mobile operator O2. This core is perhaps best thought of as the brain of the system. Usually hosted in a few data centers, its software acts as a traffic cop, directing megabytes and minutes around the network, and carries out other important functions. By comparison, the RAN is just a collection of dumb boxes and antennas.

What's special about the new deal is that it allows Virgin Media O2 to provide a "standalone" 5G service. Like most Europeans, UK operators based their initial 5G launches on the "non-standalone" variant, which essentially allows the 5G RAN to piggyback on the existing 4G core. It turbocharged connectivity for smartphones but was not the revolution that 5G cheerleaders had promised. Real 5G, some have taken to saying, comes with the standalone core. 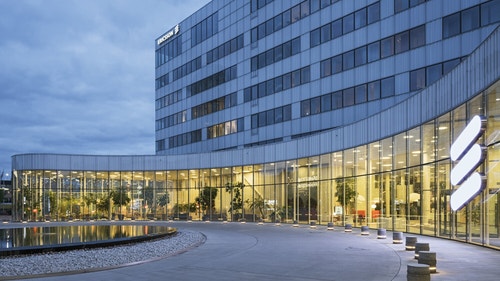 "It modernizes your core infrastructure, which is important for the cost of operations, and it introduces new capabilities," said Gabriel Brown, a principal analyst with Heavy Reading (a sister company to Light Reading), in a recent discussion about the 5G core. "Network slicing and edge services with remote gateway placement are the canonical examples, and in time critical IoT [Internet of Things] applications. In non-standalone, you are limited to the 4G product set, more or less."

Much is riding on these new features. With network slicing, an operator should be able to provide many different types of network service over the same infrastructure, conjuring these up as and when customers demand them. A broadcaster, for instance, might need a service guaranteeing superfast speeds. A factory using robots, on the other hand, would probably look for reliability and minimal latency  a measure of the journey time for a data signal on the 5G network.

Minimal latency would be easier to provide with standalone. In older networks, network functions and IT resources are typically hosted in a few big data centers far away from some users. This distance can add tens of milliseconds to latency and frustrate provision of the most advanced services. Standalone, in theory, should help operators shift some of their core functions to the "edge," a label that describes the use of smaller data facilities sprinkled around the network. Shorter distances for network signals would cut latency.

Ericsson's deal with Virgin Media O2 has quickly followed a similar contract with Vodafone. The rival operator has so far relied mainly on Cisco, a US firm, for its mobile core. Last month, though, Vodafone said it would switch to Ericsson for standalone 5G. While the two vendors will probably cohabit Vodafone's UK network for a couple of years, maintaining two separate mobile cores would be inefficient in the long run. Cisco, as the legacy provider, seems bound to go.

The Swedish vendor is also responsible for the standalone 5G core that BT is now developing. And unlike Vodafone, BT is under government pressure to switch. When it bought its EE mobile business in 2016, it inadvertently acquired a 4G core network built by Huawei. Even before the UK ban, executives had decided they did not want Chinese products in this part of the network. But to comply with the new government rules, BT will need to have shifted all core network services to Ericsson by 2023.

"Much of that work will continue through the course of this year and our intent then is to migrate customers onto that new core through next year," said Howard Watson, BT's chief technology officer, during a recent press conference. "At the same time as that migration activity, we are really looking at and exploring the 5G standalone options that it gives us and some really exciting opportunities that we'll be talking about later in the summer in terms of the types of service that can enable."

All this, of course, means the only operator not reliant on an Ericsson 5G core will be Three, which previously chose Nokia to provide this technology. The country's three largest mobile networks will depend on the same Swedish vendor for the most critical of their critical systems, and the number of main suppliers will have dropped from four to just two.

Authorities possibly assumed they did not have to worry about the core. There has been less apparent consolidation in this market than in the RAN sector and operators seemingly have a broader choice of suppliers. In the first quarter of 2021, Dell'Oro, a market research firm, named the five biggest globally as Huawei, Ericsson, Nokia, ZTE and Mavenir. Other non-Chinese options include Cisco, Japan's NEC and South Korea's Samsung. American IT giants HPE and Oracle are also active in this market as relatively new players.

Government interventionism has stopped short of requiring operators to choose specific players, and telcos would panic if authorities went this far. Yet the unfolding situation does not look healthy. In late 2018, a software problem at Ericsson led to network outages at multiple operators worldwide and left millions of their customers without a smartphone service. Ericsson subsequently blamed the outage on faulty software used in the SGSN-MME, a core network function.

Operators spend only about $8 billion annually on the core, according to Dell'Oro, compared with up to $35 billion on the RAN. But authorities have always been more concerned about the damage a malevolent actor could do in the core, deciding to exclude Huawei from it long before they opted for the more comprehensive 5G ban. Ericsson is not deemed malevolent, and looks in decent financial shape, but heavy reliance on a single firm is undeniably risky. And it makes any government diversification strategy look very muddled indeed.