Dish's Dave Mayo pulls back the curtain on 5G buildout

ORLANDO  The executive in charge of the physical construction of Dish Network's nationwide 5G network has quite a story to tell.

"I'm having fun, most days," Dish's Dave Mayo told a packed keynote session here at Connect (X), the annual trade show from the Wireless Infrastructure Association (WIA). The association represents the nation's cell tower owners and others in the wireless industry.

Mayo certainly appeared to be having fun discussing his past year or so of work. In a relaxed, informal presentation peppered with insights, anecdotes and a few swear words, Mayo told the story of how he moved from T-Mobile  one of the nation's biggest wireless network operators  to Dish, a satellite TV company that is required by the US government to build a nationwide 5G network by 2025, mostly from scratch. 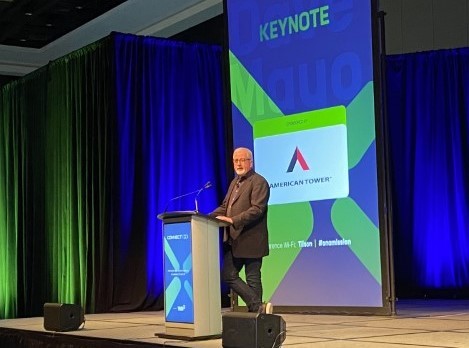 Mayo spoke this week at the WIA show.

"What a Herculean task," Mayo said of Dish's 5G buildout goals. "We've got a big, bold [buildout] program for the next four years."

From Seattle to Denver

Mayo worked at Seattle-based T-Mobile for decades, having joined T-Mobile's predecessor Western Wireless in 1996. During his tenure at the operator, he constructed several Gs, including part of T-Mobile's initial 5G network. When Mayo left he was working on selling T-Mobile's IoT services to businesses. He said those efforts often ran up against enterprise customers' desire to keep their data onsite rather than send it through T-Mobile's network  he said that kind of on-premises data routing service is something Dish plans to make available to its own enterprise customers with its cloud-powered, open RAN 5G network.

"There's a lot of things that are different" in the Dish network, he said.

Mayo said he started talking with Dish Founder and Chairman Charlie Ergen about leaving T-Mobile in the early part of 2020. "Charlie is a pretty pioneering guy," Mayo said, noting that Ergen championed satellite TV services nearly 40 years ago and was also an early player in the streaming TV industry with Dish's Sling TV. "I've learned a lot from Charlie."

Mayo said he closed on the purchase of a house in Denver on his first day of working at Dish. The company announced the appointment of Mayo as its EVP of network development in June of 2020, positioning Mayo to work alongside other Dish networking executives including Marc Rouanne (in charge of designing the network) and Stephen Bye (in charge of selling the network).

Mayo said one of his first big decisions at Dish was to blow up the company's initial organization structure for its wireless network team. He said the company had centralized each part of its 5G buildout strategy: One group was focused on cell tower site acquisitions, another was focused on designing radios, and another was in charge of tower construction. All decisions ran through Dish's headquarters in Denver.

"Holy shit, this is a major disconnect," Mayo said of the approach, which is how Dish handles its satellite TV network. He reworked the company's wireless network division around four major geographic regions and 36 market areas in order to make sure Dish could move quickly to meet its government-mandated 5G coverage goals without needing his approval for everything.

"We had to make changes, and that's the point of a decentralized structure," he said.

Another major hurdle, according to Mayo, was convincing people to come work for him at Dish. "Folks just didn't believe we were going to do this," he said.

To address that problem, Mayo said he employed a strategy he learned first hand from T-Mobile's brash former CEO, John Legere. "You've got to tell a story," he said, explaining that he essentially created a sales pitch for Dish as part of his efforts to recruit employees. He described it as providing wind for the sales of a ship.

Mike McGovern, one of Mayo's top lieutenants at Dish, said he wouldn't have joined the company if it weren't for Mayo and the credibility he brought to the company.

At one point, Mayo said he was conducting 40 job interviews a week during the early part of 2020. Most, he said, were over Zoom due to the pandemic. "Boy, that's hard," he deadpanned.

Interestingly, Mayo said that one applicant arrived in person for an interview, but Mayo discovered the person had driven to Denver instead of flying, out of fear of catching COVID-19. "That wasn't someone who was very adventurous," Mayo said, noting that the job would require lots of travel. "That wasn't going to work."

A startup inside of Dish

Mayo said he relied on Dish's corporate framework  from legal services to accounting  to build his team. But he said the company's 5G business operates more like a startup than a stuffy corporation. Indeed, Dish's wireless division is based in the Denver suburb of Littleton rather than in its Englewood headquarters, south of downtown Denver.

Mayo explained that he didn't have an office for months, and often worked at a local Starbucks. The company's wireless business has also used temporary office space from the likes of WeWork while it got set up. "I've got to do things a lot faster than the legacy business," he said. "It's not for the faint of heart, but we're doing pretty amazing things."

Mayo said that Dish repurposed two warehouses  one in Denver and another in Spartanburg, South Carolina  to assemble its 5G radios. The warehouses were previously used for refurbishing the company's TV set-top boxes.

"A cash cow [from Dish's legacy businesses] and a startup, all in the same place, is a little bit of a contradiction," he noted.

Dish is not planning to build a 5G network like the ones from T-Mobile and Verizon. Instead, the company is using open RAN equipment from Taiwan's Microelectronics Technology Inc. (MTI) and Japan's Fujitsu, controlled by software from startups Mavenir and Altiostar, and will run all of its network functions inside Amazon's cloud. Dish is using software from NeXsysOne to organize and track its network buildout.

Mayo recalled his initial reaction to Dish's network architecture: "I had this feeling that something was missing. And then it hit me: Where's the switch? For those of you guys that have been around for a while, there was no damn switch. It just felt weird. We were doing all that stuff in the cloud."

Another major difference is that Dish is not using equipment from Sweden's Ericsson and Finland's Nokia, two of the world's three big 5G equipment vendors. AT&T, T-Mobile and Verizon all rely heavily on equipment from the two vendors for their own 5G networks. "I call it the Scandinavian mafia," Mayo said of Ericsson and Nokia, explaining that Dish's open RAN network is "going to give us as operators a whole lot more control over the features and the functionality."

Mayo explained that Dish technicians are assembling its cell tower cabinets and radio equipment at its two 5G warehouses and then shipping that equipment around the country. Cell tower owners like Crown Castle and American Tower then receive those shipments and install the equipment onto their towers. Mayo said Dish is working to make sure the installation process is quick and efficient by using standardized designs and creating a backlog of equipment ready to be installed in each of its markets. That way, cell tower crews can move from one installment to the next without any downtime in between. Mayo said Dish has so far not encountered any major difficulties in obtaining components or equipment.

Further, Mayo said that virtually all of the cell towers Dish will use around the country are already being used by at least one other 5G provider like Verizon or AT&T. Thus, Dish will be a second, third or even fourth tenant on those existing towers. That, Mayo said, ought to help Dish quickly erect its network around the country. He said the company eventually expects to broadcast its services atop "tens of thousands" of cell sites nationwide.

Mayo said Dish's cell tower partners have already started installing the company's equipment in locations in the interior of the country, such as Columbus, Ohio. He said work in coastal cities like New York and Los Angeles will start later because the company plans to use rooftop sites, due to local regulations, that may require different equipment configurations.

"We are running as fast as Mr. Mayo tells us, which is fast," agreed Jeffrey Stoops, CEO of cell tower owner SBA Communications. Dish, he said, "is for real."