Dish's biggest cloud turns out to be Microsoft, not AWS

Better known in the US consumer market for its pay-TV services, the company founded by American billionaire Charlie Ergen is pumping billions of dollars into the rollout of a new mobile network based on the latest software and Internet technologies.

While operators have traditionally used on-premises equipment and private clouds to host IT workloads and network resources, Dish is entrusting just about anything it can to AWS.

Yet the public cloud provider supporting most Dish subscribers today is not AWS but Microsoft Azure.

Thanks to a roaming deal with AT&T, Dish provides 4G services to millions of customers through mobile virtual network operators (MVNOs) such as Boost Mobile.

It launched its own 5G network in Las Vegas earlier this year, and now claims this covers about a quarter of the US population. But most Dish customers are still MVNO ones on AT&T's network. And AT&T's main cloud partner is Microsoft.

It is an overlooked fact that Rick Lievano, the chief technology officer of Microsoft's telecom business, could not resist highlighting at this week's Digital Transformation World (DTW) event in Copenhagen.

"Who is running all those subscribers today? They are all running on Azure," he told Light Reading.

AT&T announced a public cloud partnership with Microsoft in June last year, revealing plans to move its main 5G core into Azure. But Lievano says millions of 4G customers served by Dish on AT&T's network "are running all their core services on Azure."

Dish claimed to have about 7.9 million mobile customers at the end of June in its last quarterly filing with the US Securities and Exchange Commission. 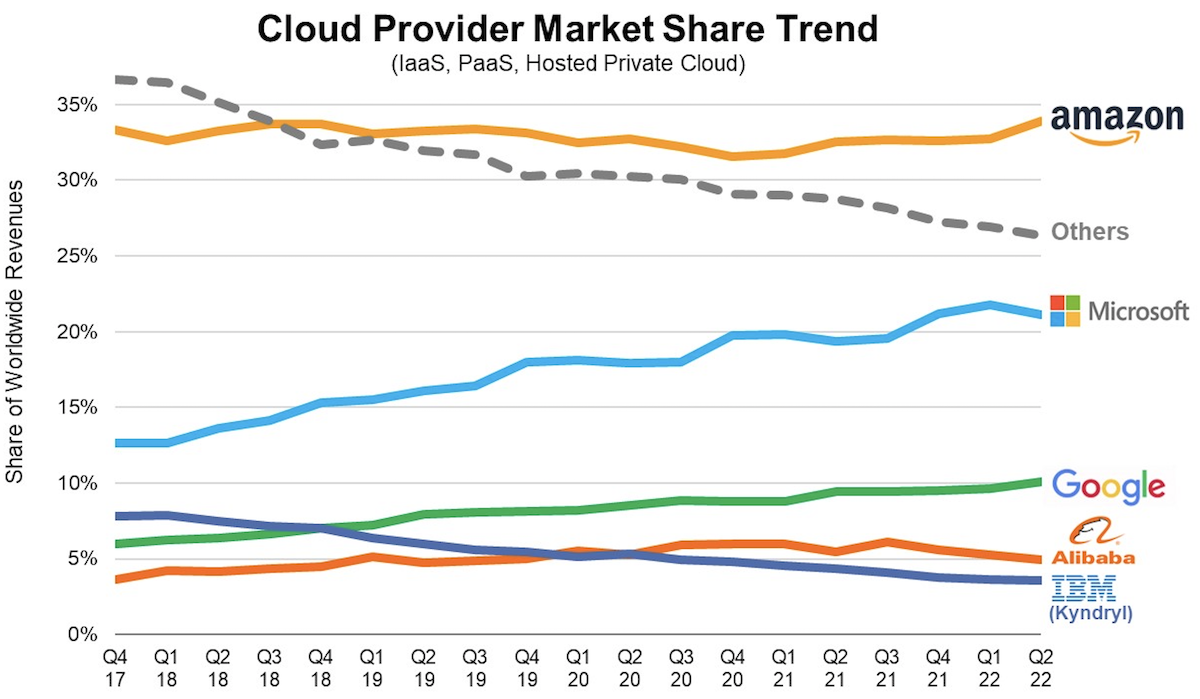 Microsoft not only runs the AT&T core but also owns it. Last year, it bought the US operator's network cloud and related assets, including the engineering team that manages them.

While the financial terms and other details were not disclosed, AT&T has sold off various technology assets and shrunk its workforce in recent years as it tries to slash costs and narrow its focus.

Headcount has fallen from about 280,000 in late 2017 to 172,400 at the end of June, due partly to the divestment of media subsidiaries including WarnerMedia, the unit it rebranded after its $85 billion takeover of Time Warner.

Its sale to Microsoft now underpins the software giant's public cloud strategy in the telecom sector, says Lievano. Azure Operator Distributed Services (AODS), the update it announced in February, is based largely on those assets together with Affirmed Networks and Metaswitch, two core network providers Microsoft bought in 2020.

In a blog published in February, Jason Zander, Microsoft's executive vice president of strategic missions and technologies, said AODS would combine an "enhanced version of the acquired AT&T technology" with security, monitoring, analytics and machine-learning products.

Public cloud rivalry and the demise of OpenStack

Lievano is scathing about AWS in a sign of growing rivalry between the world's two largest public-cloud providers.

"They have chosen to learn with their customer projects," he said.

"AWS is going to learn a lot from Dish. Dish is going to pay a lot for AWS learning their business. We made a conscious decision not to do that. We are not going to charge customers for learning and becoming telco experts. We are ultimately going to acquire the right level of expertise."

Data published by analyst firm Synergy Research Group showed that AWS served about 34% of the global market for infrastructure-as-a-service, platform-as-a-service and hosted private cloud services in the second quarter, giving Microsoft roughly 21% of the market.

With Google reckoned to have 10%, the three main public clouds control about two thirds of the entire market and have grown their combined share in the last five years.

That has fueled concern about their dominance, but Lievano paints a bleak picture for what has been one of the main alternatives in the telecom sector until now.

"It's done  the industry has said there is no future here in the long term," he said about OpenStack, a cloud-computing platform that seems to have aged badly.

"The telcos transformed it into their private cloud because it provided some of the capabilities they needed, but it really morphed into something it wasn't intended to be," said Lievano.

"It served its purpose. That square peg was made to fit into a round hole and it helped the telcos modernize and move into a private cloud world. But look at the technology it was built on. Kubernetes didn't exist. Kubernetes to all intents and purposes killed the underlying model that OpenStack was built to use."

Dish has encountered various rollout challenges and reported the loss of more than 200,000 mobile customers at its retail business for the three months ending in June.

Speaking at DTW this week, Adam Saenger, Dish's vice president of products and marketing, said much of the company's effort is now going on addressing the enterprise sector.

"We're opening up the ecosystem to put data that is rightly the enterprises' back into their hands," he said during a presentation.

"No longer is it a closed ecosystem but an open environment where enterprises get to innovate."

But there is skepticism among analysts that Dish can succeed against AT&T, T-Mobile US and Verizon, the wireless incumbents.

"It's a challenging landscape that is dominated by the top three," said Paolo Pescatore of PP Foresight.

"Dish doesn't have the scale and lacks credibility. It's nice to see the enterprise-centric approach, but it's a tall order."