BARCELONA -- Mobile World Congress -- Ericsson AB is taking its MSC Server Blade Cluster to the data center, going for a big-density variant of the Cloud System being shown here.

The new version would pack 192 blades into one standard-sized rack by arranging them in filing-cabinet fashion (see below). A drawer would pull out to give access to the cards inside. 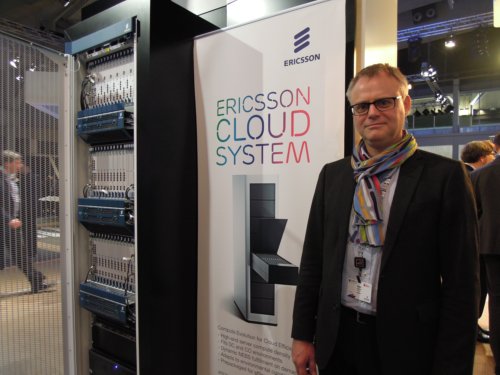 The new version of the blade cluster will probably arrive on the market late in 2014, says Mats Alendal (above), Ericsson's director of cloud strategy implementation.

The new Blade Cluster will conform to NEBS specifications, so that Ericsson can sell it into telco central offices, but of course it doesn't have to comply with NEBS in the data center.

The system will be able to ratchet down the servers' system clocks if the heat gets to be too much. Thinking of that in reverse, it means the operator or data-center owner can run the clocks as fast as is feasible.

The new Blade Cluster would be part of the Cloud System that Ericsson announced two weeks ago. Hardware-wise, Cloud System is rather ordinary: It consists of Ericsson's Blade Cluster and Smart Service Router (SSR), both of which have been deployed already.

The difference, of course, is that Cloud System includes cloud software: OpenStack cloud management and the KVM hypervisor. That proper Cloud System package isn't due to be available until the first quarter of 2014 but was on display at MWC.

Bringing the product into the data center wouldn't precisely match what's being done by VCE, the joint venture of VMware Inc., Cisco Systems Inc. and EMC Corp. But it's a tempting parallel, considering Blade Cluster includes EMC storage and is obviously built to work well with Ericsson's networking gear.

Craig Matsumoto 2/28/2013 | 12:08:27 PM
re: Ericsson Pushes Blades Into the Data Center 192 blades is a lot. We've inserted a photo that shows the filing-cabinet architecture that Ericsson is using to get those 192 blades in.-á ("Architecture" in the Ikea sense.)