Watch Out Telcos, There's a New Muni Broadband Wave on the Horizon

Ask most cable and telecom network operators about municipal broadband and there's a fair amount of eye rolling, usually followed by references to failed projects that cost taxpayers money and never delivered results. But despite industry skepticism -- and often outright antagonism -- a new crop of city executives is re-examining their role in broadband deployments.

Why? First, the national discussion around smart cities has evolved. It's not just about putting sensors on street lights and adding cameras to intersections anymore. There is growing recognition that network infrastructure is critical for enabling smart city initiatives at scale, and with that understanding has come the logical deduction that owning and/or controlling network assets is valuable.

"Infrastructure is the yellow brick road" for smart cities, says David Graham, deputy COO for the city of San Diego, who spoke this week at the Smart Cities Connect Conference & Expo in Kansas City.

And for the first time at this annual event, that sentiment was echoed by a significant number of city and technology leaders now working to implement smart city strategies.

Second, while most cities recognize that they can't do everything on their own, they're also becoming more aware of where they do have leverage with the private sector, as well as the potential consequences of not setting ground rules with partners today before the Internet of Things takes over.

A good example of this is the city of San Francisco. Mayor Mark Farrell has announced a new "Fiber for SF" initiative with the goal of getting fiber broadband to every home and business, and making free WiFi available in public spaces. According to Farrell, a team of folks from the city has been working behind the scenes on this project for four years, and after much research, he and his cohorts have decided that they want to create a public/private partnership to achieve their aims. However, a key tenet of that partnership will be that the city must own its network infrastructure.

"This is really what people wanted: publicly owned from day one; [an] open access network," says Farrell. And, "We want net neutrality back. We want consumer privacy protections."

Farrell says the plan is to sign a contract with a partner to run lit and dark fiber network services in the city for 15 years, all with provisions in place related to net neutrality, privacy, security and equity. That partner will build and operate a gigabit-speed fiber network, and then lease it out to retail service providers, earning a guaranteed percentage of the revenue generated.

So far, the city of San Francisco has released a Request for Qualifications regarding the project, and it is right now processing responses to that RFQ from potential partners. The hope is that the city will be able to draft a concrete proposal in the near future that it can put to voters for budget approval in November. If approval is granted, the city will then move to a Request for Proposal (RFP) process.

"In terms of owning the asset itself... to me it's critically important that the public owns it, especially as you think about the revenue opportunities down the road," says Farrell.

But he adds, "To be clear, we're going to have a large opposition campaign from the telcos... And we're ready for it." 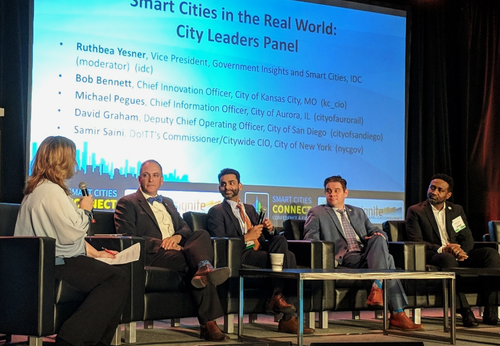 Another example of network infrastructure leadership is coming from New York City. While CTO Miguel Gamiño, who has helped manage several projects including the LinkNYC kiosk rollout, is getting ready to leave his position, Samir Saini, the former CIO of Atlanta, has just relocated to New York as DoITT Commissioner and CIO.

Saini not only brings a wealth of expertise with him, but he's also gaining authority in his new NYC role with direct oversight of the city's telecom franchise agreements. Those franchise agreements are where the rubber meets the road for network infrastructure, and Saini is clear that he will pursue arrangements designed to make sure all of the city's residents benefit over the long term.

"The infrastructure stuff is not sexy, but it is really important," says Saini. "And I think the core foundational component to any city being a smart city, and however you want to define that, is a connected city. So it's that basic foundational broadband access for everybody in your city. It's the equitable and affordable distribution of high-speed broadband on every street, in every home, in every public facility across our cities."

In the latest wave of municipal interest in broadband network infrastructure, there is general consensus that cities and commercial operators are going to have to find new ways to partner. While a few communities are taking broadband entirely into their own hands, most are actively seeking help from the private sector, recognizing that particularly as the smart city movement gains momentum, local governments aren't best suited to handle the complexity of network operations and the rapid pace of technology change.

Network operators also seem to be coming to terms with the idea that they have to court communities if they want to form successful partnerships and put themselves in a position to make serious money from smart cities.

As the conversation continues, they'll just have to make sure not to underestimate the will of the current class of city leaders, or how informed and strategic about network infrastructure they are starting to become.

kq4ym 4/15/2018 | 4:00:54 PM
Re: Interesting stuff While it's probably mostly true that "owning and/or controlling network assets is valuable," and therefore the municipalities would love to control those assets, I would guess in the long run, corporate entities will actually end up with those assets. Due to the lack of expertise at the city or town level, and the capital needed to provide the services, it would almost seem a given that plan is not going to work in many cases.
Reply | Post Message | MESSAGES LIST | START A BOARD

Joe Stanganelli 3/30/2018 | 5:46:36 PM
Re: Interesting stuff > "Breaking apart bundles of fiber is exactly what the Trump DoJ required CenturyLink to do when it merged with Level3."

You mean selling them off, right (like the interests in Idaho, for example)? I remember reading a lot about that as part of the deal.

In other words, to clarify: You surely don't mean literal, physical breaking apart of the fiber? (That would be nuts, IMHO.)
Reply | Post Message | MESSAGES LIST | START A BOARD

Joe Stanganelli 3/30/2018 | 5:43:53 PM
"We want Net Neutrality back." Unfortunately, Farrell either doesn't seem to realize or is ignoring that you can't have real Net Neutrality and a sustainable and reliable Smart Cities and commercial IoT infrastructure. Certain traffic must be prioritized. Otherwise you've got critical infrastructure facing downtime, drones crashing, and other catastrophes while Johnny Hipster tries re-binging Black Mirror.
Reply | Post Message | MESSAGES LIST | START A BOARD

Clifton K Morris 3/30/2018 | 3:10:44 PM
Interesting stuff When it comes to smart cities, there definitely quite a few out there. However, how about smart states. For example, in this world community of Delta-Montrose, in rural Colorado, a broadband network award was awarded to a smaller start up.

When the local ILEC, Centurylink, found out about this, they made a tender offer to buy the company out including the award and funding using First Right Of Refusal

When legislatures found out about this award and subsequent change of hands of lining CenturyLinks pocketbooks (funds were likely used to finance additional mergers), State Legislature passed a bill that requires FROR-based transactions to provide similar services at a lower price to the customer.

This change to FROR helps to ensure that good-faith negotiations occur and funding made available goes to ensure the services which people make taxpayer dollars available to purchase actually become available.

Changes like these can also enable and allow Verizon or AT&T to build high speed data networks in areas where a local incumbent Baby Bell struggled to gain approvals or simply didnt want to build because it had negotiated to a clause which allows it to still accept municipal broadband funding but offset the affected population of customers in another area.

Building broadband infrastructure can be relatively easier if cities and towns build their own fiber in the right-of-way, then lease it to carriers on a per-fiber optic strand basis instead of wholesale-selling of right-of-way rights to the highest bidder.

Breaking apart bundles of fiber is exactly what the Trump DoJ required CenturyLink to do when it merged with Level3. Its a solution that solves many issues if cities and municipalities also look to installing their own bundles of 24,46,or even 128 strands as part of any upgrade or new roads or transportation project. Indeed, it was the DoJ realized the existing business model which included exclusive, in perpetuity sale of right-of-way rights instead of individual fiber strands placed companies at a disadvantage in the long term. Instead, new taxpayer-funded fiber should be laid whenever roads are expanded, paved, or large road infrastructure projects occur.

Then from there, with inexpensive solutions from BaiCells things become easier and manageable. Todays BaiCells even has a solar-powered LTE base station with a range between 8-10 miles that can run for 24-48hours (at full load) with only 4 hours of of sun to charge the battery. Of course, BaiCells could be mounted on a light pole, but solar is free and requires less electrical engineering work. Low-voltage solutions require one less sign-off.