Comcast first signaled its interest in smart cities when it announced trial network deployments last October based on the Low Power Wide Area Network (LPWAN) technology known as LoRa. The company has been relatively quiet on the topic since, but new details are starting to emerge both from Comcast partners and Comcast itself as the cable company plows ahead with its new subsidiary IoT business known as machineQ.

machineQ's early activities make two things clear. One, IoT is a priority for Comcast Corp. (Nasdaq: CMCSA, CMCSK), even if few know it yet. Two, everything Comcast is developing in the IoT and smart city sectors flows right back to the company's existing telecom infrastructure, and to technology ecosystems Comcast has already helped to create.

On a June day in Philadelphia...
The scene is a dark auditorium tucked away in a corner of the otherwise rowdy Franklin Institute in Philadelphia where hundreds of students are bouncing around the science center in camp programs or as part of end-of-year school field trips. Members of the LoRa Alliance are on site for the group's member meeting, and Comcast is sponsoring the event along with a co-located Smart City Summit that includes presentations by the city's mayor and CIO, IoT application companies, and of course Comcast's own machineQ. 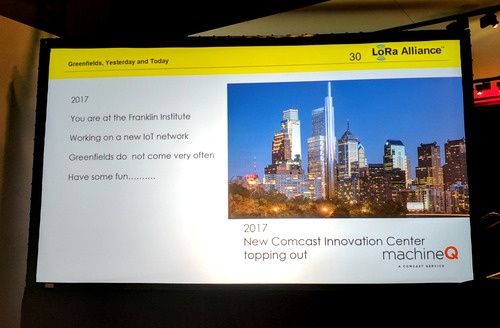 machineQ is new to the Comcast family, a product of internal business development efforts focused on the nascent IoT sector. The subsidiary seemed to appear out of nowhere last fall, but now has three trial LoRa network deployments in Philadelphia, San Francisco and Chicago, as well as champions who are ready to talk about the organization's IoT mission.

"This is really an exciting greenfield. We at Comcast like to think of having four fundamental lines of business: voice, video, data, home security. We really hope to make IoT that fifth major line of business," says Bill Ver Steeg, chief architect of machineQ.

machineQ founder and general manager Alex Khorram has done his homework. Before the business officially existed, Khorram made trips around the world to talk with other telecom providers about their own LoRa deployments, including one sojourn to South Korea where he met with executives at SK Telecom (Nasdaq: SKM), which has already rolled out a LoRa network nationally.

Back in Philadelphia, Ver Steeg explains why Comcast believes it will succeed in its own LoRa efforts. The company, he says, has a major cost advantage over competitors because of the local infrastructure and right-of-way access it already owns.

Ver Steeg notes there are two kinds of sensors that IoT applications can use: high-power and low-power ones. High-power sensors are necessary when a transmitter has to broadcast a signal over a relatively long distance to a LoRa gateway, but low-power sensors, which can be significantly cheaper, are sufficient when a gateway is nearby.

And across its customer footprint, Comcast can make sure there's always a gateway nearby.

Next page: What about those gateways?

Joe Stanganelli 6/25/2017 | 11:37:23 PM
Re: The federated model is the key The model being explored hinted at here of leveraging existing and future customer networks/connection points has already been under heavy consideration for years -- the idea being known as "Carrier Wi-Fi".

I remember a cloud/IoT conference a few years back in Boston where one Google executive, Don Dodge, speaking on a panel, discussed this very thing. The panel moderator, tech journalist Barb Darrow (then of GigaOm, now of Fortune), pointedly retorted, "Will you pay my...bill?"

Dodge's hesitating response: "Uh, the business model hasn't been worked out yet..."

(And, of course, this does not even begin to get into the other -- more technical -- considerations for these customers (such as privacy, security, etc.))

Joe Stanganelli 6/25/2017 | 11:33:16 PM
SF & others Considering the vast number of network alternatives there (not to mention ongoing innovation), I consider the S.F. market to be a very important area for Comcast to have focused on thus far (along with Philly & Chicago).

As these IoT trials proliferate from city to city across the world, industry watchers should "keep score" as to who is participating in -- and who winds up dominating -- each major market.
Reply | Post Message | MESSAGES LIST | START A BOARD

Phil_Britt 6/23/2017 | 8:03:43 PM
Re: The federated model is the key The IoT plans could well undergo some of the growing pains of wireless in its early days as there was either too few towers, connection problems from other issues or overhyped expectations. It will be interesting to see what performance Comcast considers to be good enough to stay on schedule (or accelerate it) for other deployments.
Reply | Post Message | MESSAGES LIST | START A BOARD

varunarora 6/20/2017 | 11:27:23 PM
The federated model is the key I see operators (here in South / SE Asia) struggling with the IoT business case - they know they need to do it but are finding that they hype may be running ahead of business reality. It's becoming clear that the connectivity part of the IoT business represents only a small sliver (some say as little as 1%) of the overall business opportunity. Under the circumstances, they can either go deep (consulting, integration, monitoring - skills they lack and largely lack the ability to sustain even if they hire) or broad, through federation, increasing the overall size of the pie so that 1% counts for a whole lot more. Seen in that light, the B2B2B approach Comcast appears to be taking makes tremendous sense.