FCC Chairman Ajit Pai has made accelerating broadband deployment one of the top priorities of his administration. However, leaders in several of the nation's largest cities believe he's going about that mission in entirely the wrong way.

In a combined filing with the Federal Communications Commission (FCC) , the CIOs and CTOs of a dozen cities -- including New York, Los Angeles and Atlanta, among others -- have laid out their significant concerns with two infrastructure proceedings aimed at removing regulatory barriers to broadband deployment. Contrary to the FCC's stated goals, the city administrators say they believe those proceedings will lead to action that puts future investment dollars at risk and even jeopardizes the development of advanced telecom networks.

There is context for the city leaders' arguments. Over the last year or more, there has been a battle underway as telecom carriers seek to gain more access to public rights-of-way in order to densify metropolitan fiber networks and add the necessary small cells to support the launch of 5G wireless services. The industry argues that the process for getting permits is currently too cumbersome and often more expensive than it should be. If it doesn't get better, they say, it won't be possible to move quickly enough to get Americans connected to next-generation broadband technologies. (See Utility Poles Pose Problems for 5G & More.)

Telcos have also had some notable success in gaining support for their position. Several states have passed laws, or are considering legislation, mandating how cities deal with carriers, including when they're required to grant access to city assets and even how much they're allowed to charge for utility pole leasing fees.

However, many local governments say those laws have significant negative consequences. Among them, cities contend that they lose out on the market-based value of their assets and the leverage to negotiate for digital inclusion initiatives when states dictate the terms of carrier agreements.

From the FCC filing: "These proceedings propose to allow incumbent providers of telecommunications services and facilities access to public and private property at below market rates (and seemingly, below full cost), and do not provide any incentives or guarantees that systems will be built out to serve underserved areas in urban, suburban, and rural America." 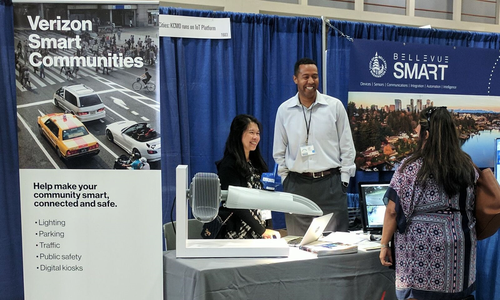 Carriers want to capitalize on broadband demand and the smart city movement.

The city of Austin (whose CIO Stephen Elkins is a signatory on the FCC filing) knows first-hand what that looks like. The local government was negotiating with service providers to expand public WiFi throughout the city earlier this year in exchange for lower utility pole leasing rates when the state of Texas passed a law capping pole fees at $250 per year. City officer Rondella Hawkins noted that the law removed any incentive for carriers to continue negotiating "since they're interested in their commercial service and certainly not public WiFi." She added that, "We went through this whole process strongly engaging with the carriers. And now these state-imposed fees are much, much, much less." (See Battle Begins for Small Cells, Smart Cities.)

Kirk Talbott, deputy CIO of the city of Atlanta, has also talked about the importance of negotiating power, pointing out that cities aren't just looking to cover their costs with leasing fees, but that they're also working to create more value for residents. "It's exploring [the question of] what is it that the telcos could provide in place of an annual permitting fee or usage fee that's of more value?" explains Talbott. He adds that the highest-value alternatives are "access to raw fiber, the dark fiber that we could utilize, and if not that, access to conduit so that we could lay our own fiber for a reasonable cost. And the other one that we've talked about is access to, in the case of a small cell deployment, access to cellular capacity."

kq4ym 9/26/2017 | 1:05:51 PM
Re: The New FCC It does seem that the negotiating power of communities is probably going to be lost if new rules go forward. Protecting consumers and local governments are seemingly going to take a back seat to allowing providers lots of leeway in building out the infrastructures with minimum regulations and costs.
Reply | Post Message | MESSAGES LIST | START A BOARD

Part II.  Give companies who make $10's of billions in profits per year free tax payer money to do what they legally should already be doing.

Part III. Give incumbents Federal Legal Air Cover to beat up the states and cities.

At least being completely in the tank for the incumbents is so obvious to everyone.

brooks7 9/19/2017 | 10:34:08 AM
Re: Incentives Printable Calendar Note as much as you don't like the current FCC, they have been in place for less than 1 year and there are challenges that extend back a decade.

And incentives are the basic problem here.  All of the companies are for-profit companies.  We are trying to incent them to install public works the way we want.  The problem is that the incentives that we provide do not meaningfully change the economics for them.

The only way for 100% broadband to exist is for it to be a universal service and we essentially turn on Title II.

As to something like City WiFi, I think cities need to ask for proposals and see what they cn get.  I think they will find it is more of a budget issue than anything else.  They don't like the costs, but I don't think any of us have sat down and thought about what it would cost to build such a thing and then give it away.

KBode 9/18/2017 | 10:50:02 AM
Re: Incentives This current FCC's policies are worse than old school. They're like Mike Powell's (now top cable lobbyist) anti-consumer and anti-competitive policies on steroids. Anybody that thinks Ajit Pai thinks "bridging the digital divide" takes priority over major ISP profits is fooling themselves for one reason or another. I've YET to see Pai or O'Rielly stand up to large ISPs like AT&T on ANY ISSUE WHATSOEVER. They are a rubber stamp for what AT&T and Verizon want, full stop. That's not the path forward for uniform connectivity, good business, or the health of he internet.
Reply | Post Message | MESSAGES LIST | START A BOARD

Phil_Britt 9/16/2017 | 6:33:16 PM
Re: Incentives Though incentive-based options could work, the FCC has tradtionally followed old-school approaches. Until there is a history of several administraitons with new-school approaches and appointees with the same philosophy, FCC won't change.
Reply | Post Message | MESSAGES LIST | START A BOARD