When it comes to the FCC's Unlock the Box initiative, one of my big complaints with service providers is that they could have headed off regulators long before we landed in our current sticky mess.

If operators (Time Warner Cable Inc. (NYSE: TWC) excepted) had released apps for popular retail platforms like the Roku and Apple TV two years ago, the government would have had little ammunition to use against them for gouging customers with set-top rental fees. There's much more to the Unlock the Box debate than that, but it's the issue of set-top rental fees that's firing up current rhetoric. (See The Future of TV Is... Wait, Where Are the Apps?)

In answer to the app complaint, Comcast Corp. (Nasdaq: CMCSA, CMCSK) today announced that it's created an Xfinity TV Partner Program, and that Samsung Corp. is its launch partner. That means that soon, consumers who buy a 2016 Samsung Smart TV will be able to get Comcast TV service without hooking up a set-top. The Samsung scenario's limited. I have a Samsung TV, but it's only smart because I have a Roku, Apple TV and Chromecast stick attached. It's also from 2009.

Fortunately Comcast also announced that it's partnering with Roku Inc. , and that later this year a new Xfinity app will also be available on Roku TVs and streaming players. Still no set-top required. (No data caps either because this is Comcast's managed IP network, but that's another post.)

So look at that. The FCC applies pressure, and suddenly Comcast can deliver apps for retail devices. Hmm.

If only Comcast and other providers had acted faster. If we'd had more apps for connected TVs back in 2014, pay-TV operators would likely be in a very different position today. And they'd have a lot more leverage to counter the bigger issue with Unlock the Box: the separation of pay-TV video streams from operator-created user interfaces.

kq4ym 4/29/2016 | 10:49:02 AM
Re: Too little too late? I've been totally satisfied with using Roku on my older TV for a couple of years now as well as using an antenna for over the air local broadcasts. After many years of paying through the nose for a provider's DVR and set top box, I've regretted not getting rid of that stuff years earlier. Keep it simple, and save a bundle of cash.
Reply | Post Message | MESSAGES LIST | START A BOARD

jbtombes 4/21/2016 | 7:25:21 PM
Re: Too little too late? There's an ensuring if embattled tradition of anarchism - see Ross Ulbricht's Silk Road - but enthusiasm for piracy is slightly inconsistent with a keen interest in seeing the FCC exert more power.
Reply | Post Message | MESSAGES LIST | START A BOARD

danielcawrey 4/21/2016 | 5:02:27 PM
Re: Too little too late? To me, it seems obvious that apps are going to be the future of cable. The problem is that the providers see no incentive to opening up their platforms. That's why it has taken regulatory scrutiny to get this far. It looks like this environment is getting better and not worse, though.
Reply | Post Message | MESSAGES LIST | START A BOARD

Mitch Wagner 4/21/2016 | 12:26:48 PM
Re: Too little too late? Love that graphic. It basically boils down to: One of the reasons that media companies have problems with piracy is that pirates get a better experience than paying customers.

Think about it. Imagine a Bizarro world where shoplifters get concierge service in brick-and-mortar stores – snacks, coffee, an attendant to carry their loot – while paying customers are escorted around in handcuffs. That's the media market today.
Reply | Post Message | MESSAGES LIST | START A BOARD

Meanwhile, the FCC has released a statement indicating they're not all that impressed:

""While we do not know all of the details of this announcement, it appears to offer only a proprietary, Comcast-controlled user interface and seems to allow only Comcast content on different devices, rather than allowing those devices to integrate or search across Comcast content as well as other content consumers subscribe to,"
Reply | Post Message | MESSAGES LIST | START A BOARD

$50 gets you all the dedicated hardware you need, with free software, to get all the ad-free content in the world illegally on your TV. On demand. Thousands of articles and videos will walk you through the process. Had the TV / movie / cable industries embraced change instead of fighting it tooth and nail, there wouldn't be millions of people pirating their content.

Now they're faced with trying to stop the leakage and win back those people - some of which have never even used traditional TV / movie / cable services. When presented with having to pay (a lot) for hundreds of channels most people dont even want, and then having 30% of the content filled with commercials, it's not a compelling argument. With the economy where it is, can you blame people?

Complacency and thinking that success can be legislated is the industry killer. Even today, this graphic still depicts the industry mindset: the customer is the enemy. 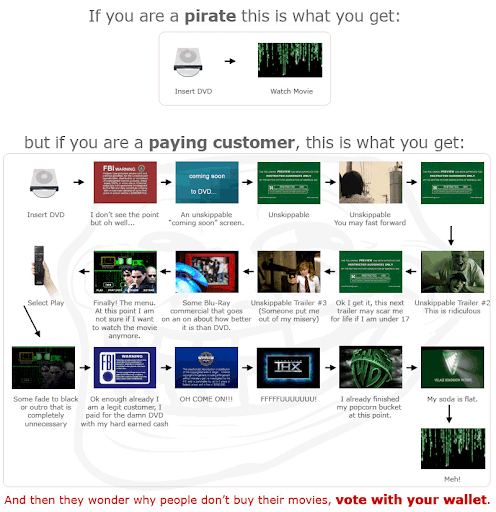