Verizon gave select audiences a dose of virtual reality during this year's Super Bowl with live demos presenting 180-degree views of the on-field football action in a virtual stadium environment. The VR experience modeled an actual stadium skybox in Minneapolis where the Super Bowl was played and included two live 4K video feeds of the game. Interactive features offering highlights and replays were also available in the "Virtual Skybox," which was delivered as an app for Google's Daydream View VR headset.

The purpose of the demos was two-fold. First, Verizon Communications Inc. (NYSE: VZ) wanted to show off some of the work it's doing within Envrnmnt, a division of Verizon Labs dedicated to AR and VR technology. And second, it wanted to prove the ability of its 5G test network to handle high-bandwidth applications. According to T.J. Vitolo, CMO for Envrmnt, the combination of 4K feeds, additional HD feeds and interactive extras created a live stream of content requiring significant throughput.

"The net total bandwidth that we were driving through that experience was 50 megabits per second (per VR headset), which is along the low end of 5G, but definitely a lot more than what 4G can deliver today," says Vitolo. 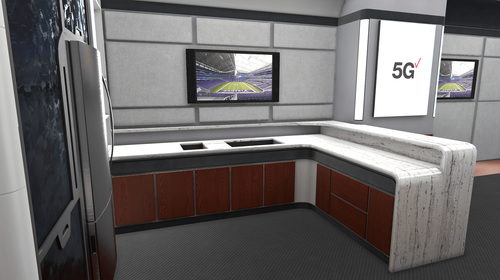 The Virtual Skybox app itself was born out of another Envrnmnt project called Operation Convergent Response (OCR). The OCR application, which Verizon is planning to release later this year, offers a virtual command center for handling disaster recovery operations. Using a VR headset, government and emergency officials will be able to view the same video and images in real time, while also importing additional relevant data (like weather or building blueprints) and interacting with each other in the same virtual environment.

The Super Bowl application is similar. With Virtual Skybox, the backdrop is a stadium instead of a command center, but it runs on the same principles for video playback and interactivity. 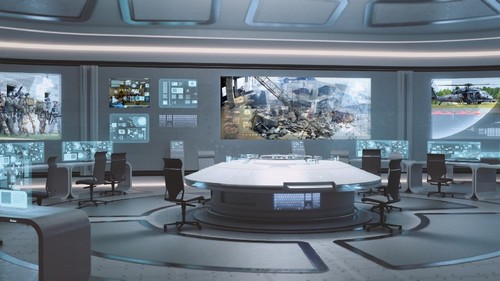 Vitolo says Verizon also developed versions of Virtual Skybox for the HTC Vive and the Facebook Oculus platforms, but that it wanted to make a user experience that was lightweight enough to operate on a less expensive VR headset paired with a mobile phone.

And yes, the Super Bowl won't be the only sports experience Verizon addresses with its VR technology.

"We're working closely with the NBA and NFL to understand what consumers would like to experience on the go with 5G and also 4G for virtual reality and extended reality experiences with multiple content feeds," says Vitolo.

Want to know more about 5G tests and trials? Check out our dedicated 5G content channel here on Light Reading.

On the 5G front, Verizon set up a pre-specification 5G node outside an actual skybox at the Minneapolis stadium to deliver the demo locally. (Several football stars not playing in this year's Super Bowl were invited.) However, the company also hosted an employee-only experience back in New York at its 5G test center in Silicon Alley.

Verizon ran pre-commercial 5G trials in 11 markets in the US in 2017, with speeds topping 1.4 Gbit/s. The operator plans to launch fixed 5G service in three to five markets later this year, starting in Sacramento, California. (See Verizon Says 'Up to 5' Fixed 5G Markets Will Go Live in 2H18.)