Verizon: Predicting the cost of COVID-19

While few public companies are offering much in the way of financial forecasting amid the pandemic, Verizon said it expects total wireless service revenue growth in the second quarter of 2020 across its consumer and business units to be 3% to 5% lower on a year-over-year basis than it originally expected prior to the spread of COVID-19.

Further, for its full fiscal 2020, Verizon said it now expects overall adjusted, non-GAAP earnings-per-share growth of between negative 2% to positive 2%. Previously, the company had expected growth of 2% to 4%. "This updated expectation is based on a scenario that assumes significant headwinds prevailing through second-quarter 2020," the company wrote in its earnings release.

Verizon executives explained that the company's second quarter wireless expectations are due to a variety of factors:

However, Verizon explained that most of its expected wireless revenue declines are due to changes in extra fees and not from core services. "The consumers continue to put their phone bill high up their list of priorities for payments," Verizon CFO Matt Ellis said on Friday's earnings call.

Verizon explained that its forecast is partly based on the changes it recorded during the initial month of the pandemic, which started at the end of the first quarter and continues today: 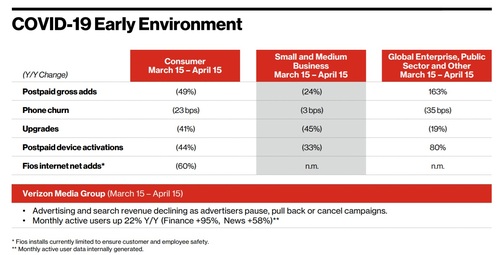 Verizon detailed the early impacts it is seeing from COVID-19. Click here for a larger version of this image.
(Source: Verizon)

For the first quarter, the company said that it recorded a decline of four cents per share due to COVID-19-related impacts, primarily due to its bad debt reserve.

Verizon also recorded an overall revenue decline of 1.6% compared with the first quarter of 2019. The company said its cash flow from operations reached $8.8 billion during the first quarter, an increase of $1.7 billion from its 2019 first quarter.

Verizon said capex clocked in at $5.3 billion during the first quarter. In March, Verizon raised its full-year 2020 capex by $500 million, to between $17.5 billion and $18.5 billion. Company officials said the operator expects to spend that money more heavily in the first half of the year compared with the second half.

Finally, Verizon offered an update on its four-year, $10 billion cost-saving program. The company said it has so far reached $6.3 billion in savings, and expects to reach its full goal, as expected, by the end of 2021.