Can RingCentral Stay Ahead of the UCaaS Chasing Pack?

RingCentral's name is unlikely to crop up at many dinner parties, unless they are gatherings of unified communications enthusiasts. But its stock market performance in the last two years would be hard for any better-known public company to beat.

In a chart knocked up on Yahoo Finance, the line illustrating its share price movement climbs nearly uninterrupted from the lowlands of 2017 to the jagged peaks of early 2019. After some dips at the end of 2018, it reached an all-time high in the last few weeks. At $105.02 on March 12, it was 54% on up the price this time last year.

Ahead of a just-announced tie-up with Ericsson, Curtis Peterson and Ritu Mukherjee, two of RingCentral's brainy sorts, were giving off little sign any bubble was set to burst.

"We promised the Street we would deliver a billion in revenues in 2020 and we are comfortable with that," said Peterson, RingCentral's senior vice president of cloud operations, between mouthfuls of curry at London's posh Cinnamon Club. "We just issued our twenty-second quarterly report as a public company that beat consensus. No other company has that track record."

On the sales side, investors giving RingCentral a thorough inspection are struggling to find many blemishes. Founded by CEO Vlad Shmunis some 20 years ago, the Californian company was a unified-communications-as-as-service (UCaaS) specialist before "aaS" and "cloud" meant anything outside nerds' circles. At first it sold mainly to small and midsized businesses, but its pivot to the enterprise has gathered pace since it went public around five years ago. Last year, revenues were up a third, to nearly $674 million, and RingCentral expects them to grow 26-28% in 2019.

What could explain this dramatic and sustained increase? Peterson's assessment suggests the UCaaS market still looks something like the telecom business did in the late 1990s, when the mobile phone revolution was in full swing. Analysts reckon the size of the addressable UCaaS market could ultimately hit between $300 billion and $500 billion annually, he said, from less than $5 billion today. "Competition is like ships passing in the night. We are not street-fighting yet."

This sounds frothily optimistic, but RingCentral is still on a mission to convert users of on-premises UC services to the righteous ways of the cloud. And many of its deals seem to be coming at the expense of traditional on-premises providers like Cisco and Avaya. "We are taking down a lot of their on-premises business because they are not ready with the cloud," said Mukherjee, RingCentral's vice president of product management. "Very little of this is cloud takeaway," Peterson added.

There are several reasons why a company making that switch might prefer RingCentral to another UCaaS player, he said. First is the demonstrable, long track record in UCaaS. Since starting out, Shmunis appears to have had an almost religious zeal for the cloud, considering on-premises and hybrid offerings as a heresy. If that has meant rejecting some business, it has forced RingCentral to be among the best at what it does.

Second is an open platform that exposes application programming interfaces to third parties, making it easy for companies to work with RingCentral. Now that openness has become the industry mantra, citing it as a competitive differentiator might seem questionable to a neutral observer. But other UC players have a long way to go, according to Peterson. Despite its recent conversion to open source technology, Microsoft lacks even internal APIs for its UCaaS products, he said.

The Seattle-based software giant is clearly one of the "threats on the horizon," though. In Gartner's "magic quadrant" of industry leaders (a tool derided by some industry professionals), RingCentral is ahead of any player on "completeness of vision," including traditional competitors like Mitel and 8x8. But it trails both Microsoft and Google, with their vast resources, when it comes to its "ability to execute." 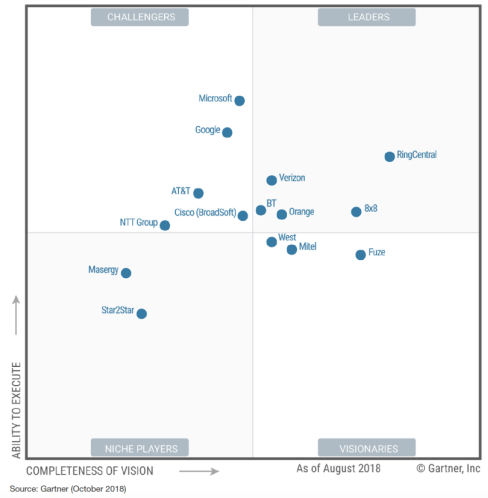 "Microsoft understands teams and communication very well," said Peterson. "Office and Azure and the ability to wrap around that -- we need to make sure customers don't engage on those platforms. The flipside is they are slap-ass horrible [Ed: definitely ass, in this case, and not aaS] at voice and video, somewhat inexplicably."

The deal announced today with Ericsson should help RingCentral to keep its nose in front. In the works for about 11 months, the tie-up is aimed at service providers that want to add a voice-over-LTE feature, based on a supporting technology called IMS (for Internet Protocol multimedia subsystem), to their cloud communications offerings.

"If you power a cloud communications platform over a VoLTE network that is a marriage of the best of both worlds," said Mukherjee. "We took a different approach from the traditional carrier-hosted solution and worked with Ericsson, which provided a product called VoLTE for UC."

In theory, the partnership will give service providers a richer set of features to offer their enterprise customers, reducing some of the hassle and expense that would otherwise be involved. The alternative, according to Peterson, would be to build a copy of the RingCentral infrastructure inside an operator's IMS core.

"Carriers are always worried about securing and connecting cloud networks. It's like open heart surgery. So this Ericsson component abstracts IMS away from the application. They get to keep running the IMS core as it is. And that can be non-Ericsson. It could be a Huawei core," said Peterson.

His trip from California to Europe brought an opportunity to eat much better Indian food than he gets in the US, joked Peterson, but it was also about putting the finishing touches to the Ericsson deal. RingCentral's executives have also held meetings with service providers interested in the new offer. Already a major European customer, the UK's BT was probably at the top of the list. Back home, AT&T -- which used to account for a tenth of RingCentral's revenues -- may be first in line.

Apart from Microsoft -- a worry enough in itself -- what could go wrong for RingCentral? Execution is perhaps the biggest risk, said Peterson. In a business as complex and fast-changing as the cloud, there is always the danger of a cock-up that no one saw coming. Any UCaaS upset outside RingCentral could also stymie the market's growth. "It would not be good for any other piece of this to belly flop and do something horrible," said Peterson.

The other sore point for some investors may be on profitability. Despite the rocketing sales growth, RingCentral's net loss widened to $26.2 million last year, from $4.2 million in 2017. It blamed the increase on stock-based compensation, debt costs and previous spending on takeovers, which are likely to explain some of the revenue growth last year. But losses may be even worse in 2019. In its last earnings presentation, RingCentral forecast an operating margin of -3.75% (at the midpoint of the range) this year, compared with -2.4% in 2018.

Investors and analysts are generally happy: A transcript of the last earnings call reads like a series of plaudits. But while RingCentral remains in the red, keeping them happy will mean sustaining the sales performance. With Microsoft and others on the prowl, RingCentral can ill afford any mistakes.