The grubby truth about telecom and the climate

Months before "find cure for coronavirus" replaced "tackle climate change" at the of top of humanity's to-do list, Swedish teen environmentalist Greta Thunberg gave a speech to the UN climate action summit in New York that would have had any 1930s demagogue scribbling down notes on performance. "You have stolen my dreams and my childhood with your empty words," she said, managing to sound choked-up and as sinister as a witch's curse at the same time.

The you in that speech was directed at world leaders, who in Thunberg's view have borrowed Planet Earth from their children and left it fit for a celestial scrapyard. But implicit in her warbling about stolen childhood is that any oldster is responsible. And oldster, to an 18-year-old, means anyone over the age of 30.

Of course, her own generation, barring a few Thunbergian tree huggers, are the worst climate vandals the world has ever experienced. You can measure that partly in record obesity levels among children and a tripling of worldwide obesity since 1975, according to the World Health Organization. The calories that produce those kids carry a monstrous carbon footprint. By comparison, Thunberg should be applauding anyone who grew up on 1950s rationing.

But the main difference is the teenage aversion to any kind of outdoorsy, non-electronic lifestyle. Most youngsters seem permanently plugged in to some electronic device  be it smartphone, tablet, games console or TV. The internal combustion engine, coal-fired power plant and dirty factory have been here for decades. The exabytes of data flying around the world are a new thing. At night, millions of homes become recharging stations for dozens of power-hungry gadgets that did not exist pre-Thunberg. 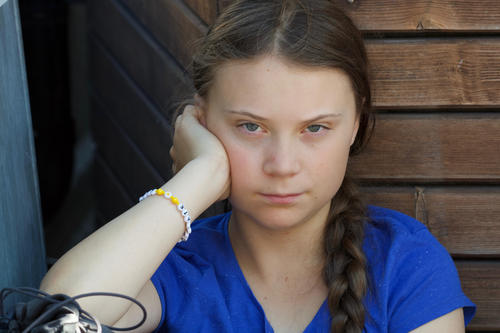 The telecom industry, whose masts and pipes make all this possible, struggles to live with the grubby truth. It even depicts connectivity as part of the solution. The pandemic-era logic seems to be that a Zoom call is much greener than the journey it might replace. It is, no doubt. The trouble is that Zoom has not stopped people from travelling. A stark illustration came in June when Mats Granryd, the director general of the GSM Association, positioned telecom as an enabler of carbon reduction in other industries. Hours earlier, he had disembarked a not-very-green flight to Barcelona for this year's Mobile World Congress.

Meanwhile, teenage years spent gaming, messaging, tweeting, Instagramming and Snapchatting have replaced activities like book reading and conversation that are less likely to fry ice caps and drown the Maldives. It is hard  no, impossible  to see how consumer use of new telecom services is enabling carbon reduction anywhere.

Not all technology executives are posturing as the good guys. "If you took the IT industry and levered it as a country, we would actually rank third behind the US and China for energy consumption," said Keri Gilder, the CEO of Colt Technology Services, a UK-based network operator, at the Total Telecom Congress this week. "That means we have a strong responsibility to be a part of the change that we need to make with the climate."

How, though? Virtue-signalling corporate commitments to be "net zero" by some arbitrary future date can be taken only as seriously as a jailbird's promise to quit crime. The problem is partly that operators have limited influence over third parties in their supply chain, representing so-called Scope 3 emissions. That, noted Gilder, is the "hardest to achieve because it requires the entire ecosystem and supply chain to participate." An even bigger problem is the customer, over which operators effectively have no authority. Is any service provider going to cut off a user because he relies on fossil fuels and doesn't recycle?

Echoing Granryd, Ericsson is now pitching 5G as an emissions cutter in Europe's energy, manufacturing, transport and building sectors. Its analysis seems based on the notion that 5G could bring efficiency to organizations in those areas  enough to reduce carbon emissions by a fifth and, no doubt, boost equipment sales for Ericsson.

The issue with arguments about technological efficiency comes down to volume. At a very simple level, if 5G is 50% more efficient than 4G, then energy use should halve on a like-for-like basis. But if 5G leads to a quadrupling in global consumption, energy use would obviously double.

It is for this reason that InterDigital and ABI Research have produced a rather sobering forecast. Partly due to exponential growth in the number of connected devices, they reckon 5G will "usher in aggressive growth in energy consumption" over the remainder of this decade. Last year, they say, the overall energy footprint of the global mobile industry was about 19.8 million tons oil equivalent (or Mtoe). By 2030, it will hit 51.3 Mtoe.

Thunberg is undoubtedly right about empty words. For all the industry's net-zero posing, carbon emissions will probably continue to go up without lifestyle changes that older generations  let alone Thunberg's  are not prepared to make. Veganism, staycations, walking to school or work and less use of connected devices are all on the list. And no profit-seeking operator is about to recommend switching off the phone. Here's hoping that geoengineering works out.