Sometime between the third and fourth centuries, the Roman Empire spun off its eastern half and then spent the next few hundred years being ravaged by marauding Visigoths and fanatical Turks as both parts crumbled. A similar story is playing out more quickly at Telecom Italia, an ancient institution that sells telecom services to modern-day Romans and their neighbors.

Much like Rome in the fourth century, Telecom Italia is now in an advanced state of decay, as the latest numbers show. Sales continue to fall in Italy, down 5.3% for the third quarter on a like-for-like basis, to about 2.9 billion (US$2.9 billion), compared with the same period of 2021. Go back five years and Telecom Italia made about 3.8 billion ($3.8 billion) over this part of the year.

Another 30,000 mobile customers in Italy decamped in the quarter. Nearly 600,000 have gone in the last year. The steady erosion of the domestic empire means Telecom Italia relies on Brazil as a crutch. With revenues there rising nearly a quarter, to about 1.1 billion ($1.1 billion), group sales inched up 1.1%, to nearly 4 billion ($4 billion).

The real calamity was what happened much further down the profit-and-loss statement. A tax bill of 2 billion ($2 billion) left Telecom Italia reporting a 2.2 billion ($2.2 billion) net loss, compared with a 222 million ($221 million) profit last year. Even disregarding this, its operating profit almost vanished, falling 91%, to 41 million ($41 million). Amid rampant inflation, costs were up sharply. And despite all efforts to whittle it down, Telecom Italia's net debt has grown by 2.5 billion ($2.5 billion) since the end of last year. At 20.5 billion ($20.4 billion), it is more than four times the company's stock-market value.

For years, Telecom Italia's response to this decline has been to carve off and try selling bits of its telecom empire to the private-equity barbarians at the gate. It has already ceded control of Inwit, the towers it needs for its mobile network, and holds endless talks with government officials and other parties about merging its fixed-line network with Open Fiber, a state-backed wholesale operator.

The sticking point is who would control that asset. In the latest twist, new Italian Prime Minister Giorgia Meloni, depicted as a right-wing firebrand in the mainstream press, reportedly wants to buy the whole of Telecom Italia  not just its fixed-line network  via state lender Cassa Depositi e Prestiti. The apparent plan is to combine it with Open Fiber and produce a state-owned Italian telecom champ, probably more bantamweight than heavyweight in the grander scheme. 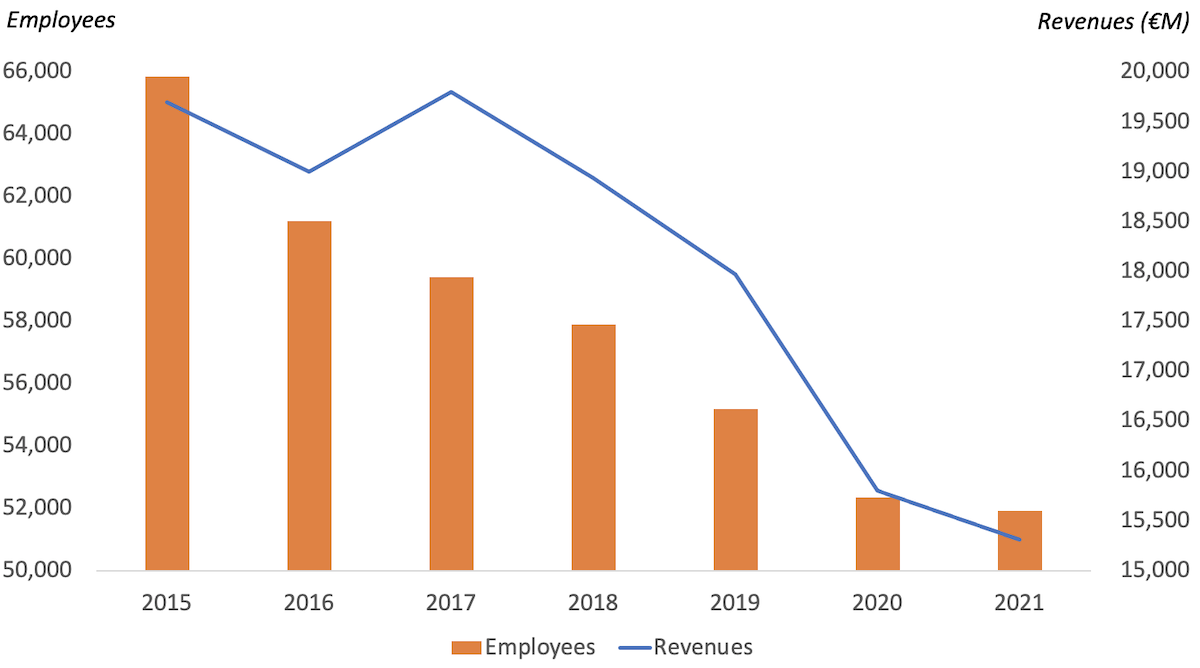 Experience suggests there will be more talking than action and that a few more emperors may come and go before anything is resolved. In the meantime, Telecom Italia's next cunning plan involves the separation of various business-facing assets into a vehicle named TIM Enterprise, featuring cloud, Internet of Things and security parts. The establishment of TIM Enterprise as a legal entity, announced today, is clearly a precursor to selling a stake in that business  Telecom Italia's favorite activity.

The operator envisages no real sales growth for NetCo, its fixed-line business, over the remainder of the decade. But as fiber rollout is finished, it does predict a fall in capital expenditure and headcount, fueling an increase in profit. The cost of that, however, is about 6,400 jobs at an organization employing 21,400, according to company slides shown earlier this year.

As for the main consumer business, it forecasts further sales shrinkage between now and 2026 and a slight uptick in profitability, again generated by a spending reduction and the elimination of 3,000 jobs at a business with 14,000 employees. Growth hopes therefore lie with TIM Enterprise, predicted to generate 5 billion ($5 billion) in sales in 2030, compared with about 3 billion ($3 billion) last year. But skepticism abounds that any telco can build a new empire on land contested by hyperscalers and other IT firms.

Telecom Italia is a worrying portent of what could befall other regional incumbents. It is not hard to imagine the UK's BT in a similar pickle several years from now, for instance  amputating body parts it can no longer afford to maintain.

Networks throughout the region are being overrun by specialist infrastructure investors and private-equity funds, a process that will eventually transform telcos  as the industry likes to call them  into asset-light, software-managed service companies, employing only a token workforce of grizzled C-level executives. By that stage, competing against the Internet giants that represent the apotheosis of the highly automated service company will be nigh-on impossible.