If only gigabytes were a finite resource, dug out of the ground like a fossil fuel. Energy company profits have geysered on supply constraints and rocketing prices even as ordinary households cut usage and granny shivers in the corner. No one is exercising restraint in telecom. Data, the commodity in which the industry deals, is a bottomless well, and consumers are guzzling from it more greedily year after year. Meanwhile, many of Europe's networks do not even cover their costs, according to research from Barclays.

Tumbling prices are observable in country data compiled by Cable.co.uk, a UK price comparison website. It analyzed more than 5,000 mobile data plans across 233 countries to calculate the cost to a consumer of a gigabyte. In the UK, it has plunged from $6.66 in 2019 to just $0.79 this year, and drops have occurred in most of Europe's other big markets. In Germany, the average price fell from $6.96 to $2.67 over this period, while French consumers were paying just $0.23, down from $1.21 three years ago. Italians can this year buy a gigabyte for as little as $0.12. In 2019, it would have cost them $1.73.

There are some European exceptions to this pattern. In Spain, the price has ticked up from $0.56 to $0.60 in the last three years, while in Finland it has more than quintupled, from $1.16 to $6.01. It is arguably a red herring, or, at least, not a very scientific assessment of the telco business model and its problems (more on that later). But it does point to the industry habit of including more generous data bundles in monthly tariffs. And that generosity is killing telcos, or so they would have the wider world believe. 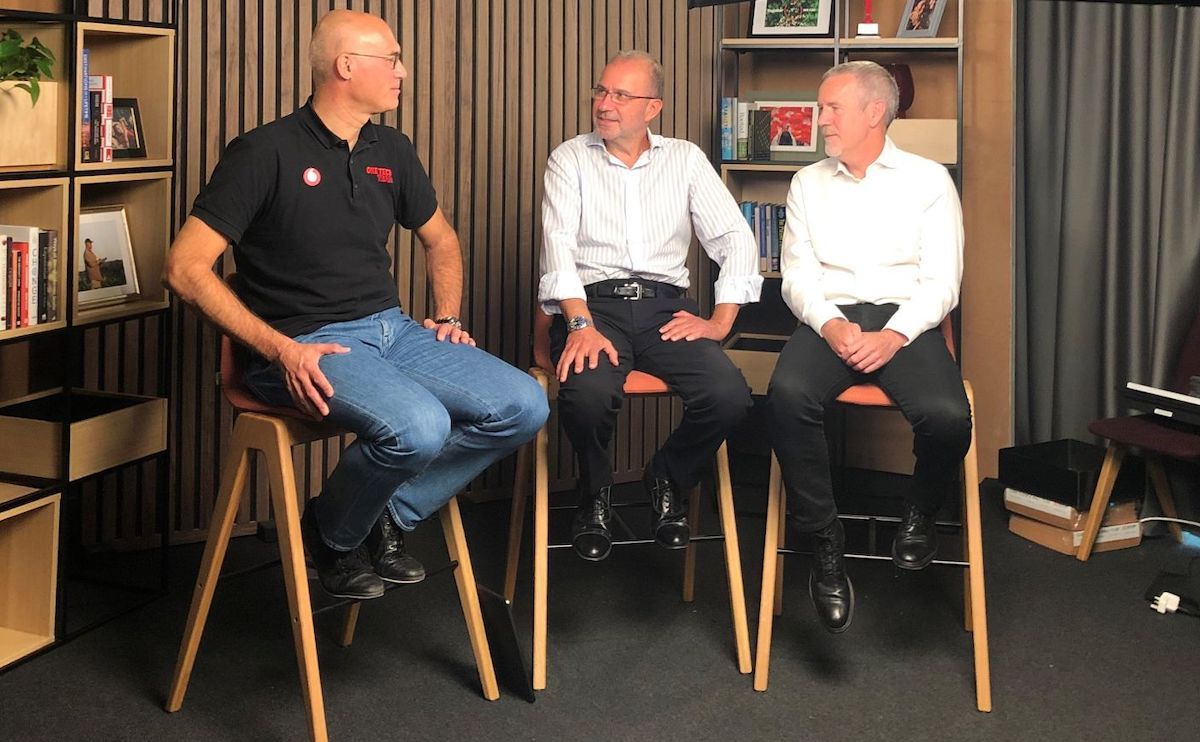 The basic telco argument is that networks are wobbling under the growing weight of data traffic like an old man loaded with increasingly heavy bags. There is a chart at the end of Ericsson's latest mobility report (dated June) that seems to prove the case about consumption (on mobile networks, at least). At the start of 2020, about 40 exabytes of traffic flowed through the world's mobile networks every month, it shows. By June this year, the amount had reached 100 exabytes.

Fairly obvious to anyone who monitors the sector is that revenues have not risen in lockstep. Take Deutsche Telekom, Europe's biggest operator, as a proxy. In Germany, its main European market, it earned sales of about 2.1 billion ($2.2 billion) in the April-to-June quarter of this year, about 8% more than it made between January and March of 2020. If sales had gone up at the same rate as international mobile traffic, Deutsche Telekom's German mobile arm would have reported more than 4.9 billion ($5.1 billion) in revenues. 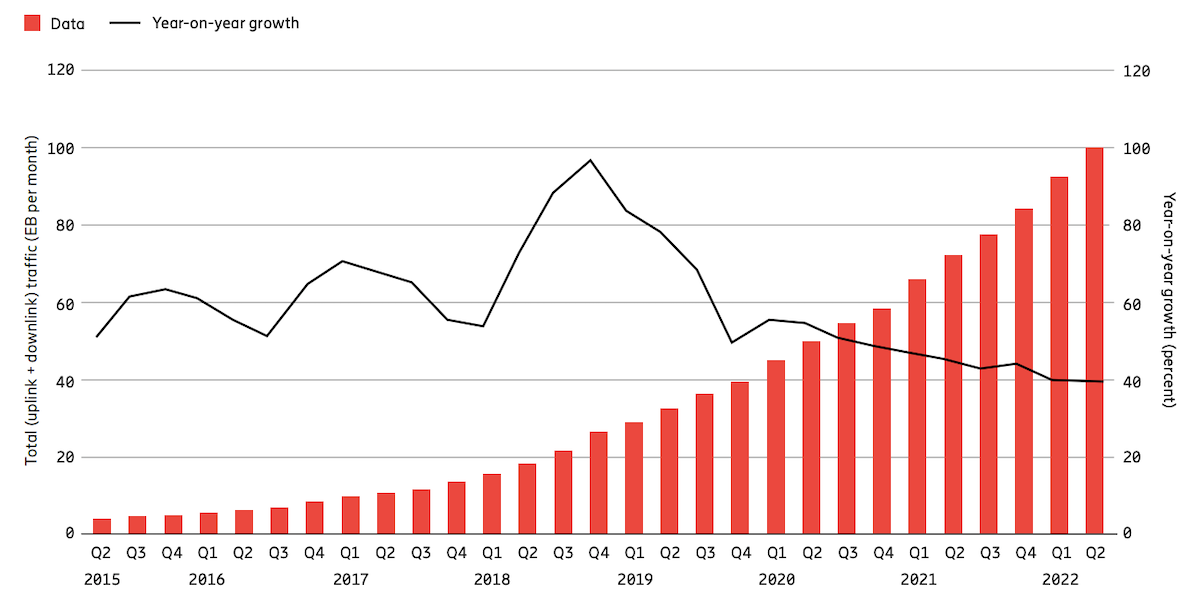 The cost of a gigabyte

Less discernible are Deutsche Telekom's German mobile costs, which it does not report. But its overall profit margins in Germany appear to have risen in the last six years. Back in 2016, Deutsche Telekom's margin for adjusted EBITDA (earnings before interest, tax, depreciation and amortization – a preferred telco measure of profitability) was 37.8%. Last year, it was 39.5%. This increase, and what seems to be a very healthy margin, is inconvenient for an industry grumbling about the cost burden of data traffic.

Deutsche Telekom is just one operator, of course, and Germany is the only one of Europe's five big economies (the others being France, Italy, Spain and the UK) where the average return on capital employed is higher than the cost of capital in the telecom sector, according to Barclays. Yet an explosion of data traffic has not triggered the collapse of operating profits at other companies, either.

That collapse is only happening now (at some operators) because energy prices are up sharply and employees hit by a cost-of-living crisis are demanding higher wages. Hence much talk of energy hedging on management calls with analysts and efforts to reduce headcount. In the US, where it completed a merger in early 2020 and has recently watched margins come under pressure, Deutsche Telekom has slashed more than 4,000 jobs from the workforce this year.

Before all this, energy costs for the average European telco tracked at roughly 5% of overall expenses, according to ratings agency Moody's, and there was never the suggestion that soaring volumes of data traffic would make energy bills unaffordable. Taking aim at a few industry shibboleths, Dean Bubley, an analyst with Disruptive Wireless, said "energy consumption is almost entirely decoupled from data volumes" in a recent LinkedIn post.

In short, a surge of Netflix traffic through a high-capacity network is not the same as cranking up the thermostat to de-ice granny. Evidence of that comes in Vodafone's most recent annual report for the fiscal year that ended in June, assuming Vodafone has experienced similar traffic growth to the broader industry. The data shows that its total energy usage dropped from 5,997 gigawatt hours (GWh) in the 2021 fiscal year to 5,926 in the last one. Electricity costs spiked from 760 million ($784 million) to 846 million ($873 million) because of higher prices.

Vodafone's overall cost per gigabyte has also fallen dramatically in the last few years, according to slides presented to investors by Johan Wibergh, the operator's soon-to-depart chief technology officer, in June last year. They show a 70% drop in this metric between 2017 and 2021, and Wibergh said he was confident "any growth of data means we can do that with a similar cost as we have today."

Energy bills and other operating expenses are only part of the equation, naturally. Operators routinely upgrade their networks to the higher-speed technologies that Wibergh deems more efficient, explaining why telcos spend far more than many other businesses do on capital expenditure.

But Europe's biggest spenders today are responding mainly to competitive pressure rather than a capacity crunch. The UK's BT – whose capital intensity rose to about 25% in its last fiscal year, from 20% the year before – is building fiber like fury (to use its own expression) because rivals have started doing the same. Only about one in four homes passed by its fiber network has bothered to upgrade, even though prices are low.

Nor has capital intensity across Europe risen sharply in the last few years, despite the emergence of 5G, a new mobile technology. According to Moody's, it rose just one percentage point last year compared with 2017, to 18%, and is projected to be 17.7% this year.

All of this makes it very hard to sympathize with operators currently demanding a "fair contribution" to their costs by a handful of big Internet firms whose services account for most traffic. Even if one disagrees that a telco's own customers, and not the Internet firms, are the real traffic generators, the cost arguments do not stack up. Just ask Vodafone's CTO.

Brian Williamson, a partner at consulting firm Communications Chambers, drew attention to Wibergh's analysis in a LinkedIn post about a month ago, challenging Europe's internal market commissioner to quiz other telcos on it.

"When Thierry Breton next meets telco CEOs he should ask them whether they have managed to reduce costs in line with traffic growth, whether they measure up to Vodafone or not, and whether traffic growth underpinned by rich content and applications is in fact good for their businesses," wrote Williamson. "The truth is out there, the contribution via demand is already more than fair."

There can be no denying parts of the telecom industry are currently in desperate shape. Vodafone's share price has fallen 54% in five years. BT's is down 49%. Everyone who takes electricity for granted already owns a phone and uses a broadband line; operators have found nothing new to sell; Internet companies are now service rivals; and regulators stand in the way of mergers that would boost returns. Taking potshots at Big Tech is easier than fixing any of those problems.