Comcast acquired Stringify in 2017 to boost its home automation capabilities, and that new team wants the world to know it hasn't been sitting around.

Through a series of updates, the Stringify technology now supports display notifications on X1-connected TVs, the ability to automatically change television channels and a scheduling function to pause and un-pause WiFi connectivity on the home network.

Comcast Corp. (Nasdaq: CMCSA, CMCSK) is also announcing a new integration with Lutron lights, Serena shades and Carrier's Cor brand of connected thermostats. Plus, the Stringify interface has undergone a visual overhaul, and the team is introducing its first Android Wear app for Android smartwatches. 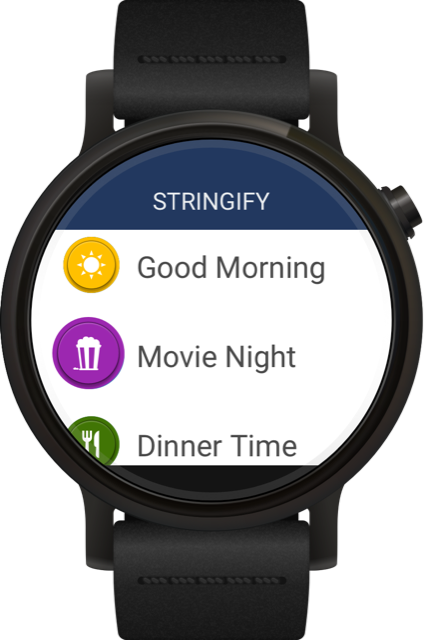 Stringify lets users pick and choose different smart home tasks and string them together, creating an easily repeatable set of actions. For example, a dinnertime use case might involve closing the shades, brightening the lights at the table and pausing connectivity on the kids' mobile devices. Instead of doing each of these tasks separately, Stringify users can combine them into one routine that's executed with a single command.

Comcast is keen to tighten the integration between the Stringify technology and its X1 video platform, essentially turning the TV into a smart home hub like the Amazon Echo or Google Home device. However, an always-on TV may not have the same appeal as a retail standalone speaker that also takes voice commands.

Fortunately for Comcast, the company is also relying on its xFi Internet platform as a control plane for the connected home. Users don't have to deliver commands or view notifications through a TV. They can use a mobile app -- and now an Android Wear app -- as an alternative interface.

The latest smart home updates from Comcast underscore the company's commitment to the Internet of Things space. While entirely separate from its industrial IoT efforts through machineQ , Comcast's smart home strategy likewise centers on adding value to network infrastructure the operator has already deployed. Both strategies also give Comcast a platform play, enabling it to generate new types of revenue and, at least in theory, to create an ecosystem of devices and services that all rely on Comcast's double layer of connectivity and software. (See Comcast Unlocks xFi-Powered Smart Home and Comcast Opens Up on Smart Cities & machineQ.)

Internet service providers everywhere are trying to diversify their offerings and Comcast has been more successful than most in putting that plan into action. As a result, Comcast now licenses several of its platforms to other service providers, notably Cox in the US and top operators in Canada. In addition to X1 and xFi, Comcast is also now driving new business through Xfinity Mobile, Xfinity Home (home security) and machineQ.

kq4ym 4/23/2018 | 12:08:22 PM
Re: Great opportunity for the elder community!! The elder community would seem to be a good target for expanded IoT devices although I would think they're going to have to be bullet proof and super easy to set up and operate. While the ability of "creating an easily repeatable set of actions," would be great I'm hoping that the process to do so in this example would be simple enough for customer to activate.
Reply | Post Message | MESSAGES LIST | START A BOARD

Unlike millennials addicted to devices and wearables, seniors typically shun tech, The trick is to deliver tech through a medium they are already very comfortable with and not intimidated by, TELEVISION.

The elder community is typically glued to their television sets at home. This presents a HUGE opportunity for Comcast to dominate senior eCare, a high growth senior services market.

Over 65 million people, about a quarter of the US population will turn 65 or older by 2030. Staggering stats!!!

Television presents a powerful high engagement platform to reach and connect with the elderly.

In fact, I wonder if Comcast would be willing to add a few additional items into a future revision. For example, when CenturyLink was in the news about merging with Level 3, the merger press releases in the news always played to strengths in the companys enterprise markets. Press releases were written in a way it seemed the combined company was almost completely abandoning the residential marketplace.

So Comcast should consider introducing a retail version. It should have a WAN port on it for those whom are unfortunate enough to be stuck with 10/100 Ethernet from a DSL modem.

Perhaps approach this business as a new subscription model for home automation. Price it at something reasonable to cover call center overhead and introduce new IP-based services.

The best hardware platform would have a DSL modem integrated inside, eliminating the need to rent a modem from a traditional landline provider all together. It should have software similar to that found in a customer-owned DSL modem. As an example, AT&Ts DSL modems from 2-Wire are pre-programmed for 8 or 10 DSL providers.

Next, fix and add capacity on wireless for cellular customers. A microcell would be nice addition for XfinityMobile services if it can hand-off to the Cellular network, and also use licensed bands. Its best to approach BaiCells for white-labeled LTE hardware and spec design for these chips. BaiCells is a LTE standards-based company who can scale for the mass market and at a low cost. To compare, microcell gear from Alcatel, Nokia and Ericsson is traditionally too expensive and only sold to carriers. These companys legacy business models are focused on European marketplace and dont adequately support a wide scale go-to-market strategy. For business justification, well, unloading data usage from Verizons MacroCell network helps to introduce a cost-control strategy for Wireless MVNO contracts that include unlimited data. Low cost microcell technology from BaiCells introduces a strategic wedge to negotiate down (not up) on pricing when MVNO contracts are renewed.

Also, the reason for BaiCells as part of vendor selection is two-fold. First, BaiCells CEO is one of the 12 distinguished Chinese engineers whom created the 3GPP/LTE RAN standards. The company has over 300 patents, and licenses from Qualcomm and Intels Patent portfolio as well. In fact, Huawei has found the companys talent, skills, and expertise so valuable, that they recently built and opened a new office across the street from their R&D and manufacturing offices in China.

Secondly, once European markets figure out what 5G is, Ericsson and Nokia will have copied Baicells, and likely also have to pay royalties to BaiCells. That primarily affects time-to-market, however its also best to work directly with the company who is performing the R&D than hiring lawyers with engineering degrees to write a check and/or get around royalty payments due to BaiCells. This creates additional non-value-added overhead and affects end product manufacturing costs.

The beauty of a product plan like this is that Comcast could create a revenue business model and customer base outside its franchise areas. They could assist Comcast in identifying areas for Cable Industry expansion with other MSOs and wireless too.

The customer experience has to be spot on. Perhaps staffed with senior-level customer advisors that are cross-trained in retention. Those guys seem to have all the access and tools for billing issues.

But when the DSL line goes down, or the CenturyLink contract is up, the device the customer is looking at has an XFinity Logo on it and it is providing the services a customer desires anyway. If the DSL stops working, you have a branded piece of hardware already deployed, and just need to develop a customer conversion strategy.

The overall goal would be to have a positive net effect on IT people, early adopters and tech enthusiast market segments. Often these are decision makers around technology used in an office setting, but work from home from time-to-time. This customer segment generally appreciates a standards-based approach and open-connectivity capability. Taking care of their needs at home is great news for Cable MSOs whom are looking to grow their Corporate and B2B lines of business.

Also, to assist with shepherding the process, I have family who works in a position of a buyer for Target stores/Dayton-Hudson, and another family member is at corporate Best Buy. I think this is an executable strategy...

I may have to write this up in an email and send it to a VP at Comcast I know, because lets face it, in Minneapolis, where BestBuy and Targets Corporate Offices are located, Comcast is already the cable internet provider, making it a great test market.