After hitting the market last fall with a TV-connected device that serves as a universal remote for set-top boxes and video streamers, Caavo is now attempting to broaden its consumer market appeal by slashing the cost of its hardware and endowing its platform with a wider mix of smart home capabilities.

The initial version of the Control Center was capable of connecting and managing up to four set-tops, DVRs, gaming consoles and streaming media players, and searching and navigating the multitude of OTT video services apps running on them. The new software release turns the Control Center into a more capable smart home hub that also expands the ecosystem of devices that it can support. 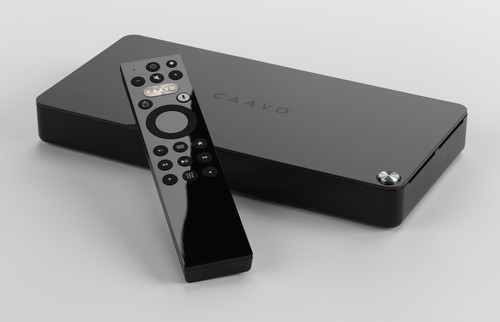 Caavo has slashed the price of its flagship device, Caavo Control Center, to $59.95 and introduced a set of subscription pricing options for the platform's underlying service.

A new Family Care feature adds a suite of tools that, for example, enables parents to monitor their kids' TV usage in the home -- a rule can be set up, for example, for an alert to be sent if R-rated content is launched through the Control Center in a kid's room. The updated platform also allows users to send messages to the TV screen -- either as a pop-up or in the form of a "full takeover" of the screen -- via a new app for mobile devices.

Using a new iOS app, users can also access the Control Center remotely and switch the TV on or off, tune to a channel or even launch an app, the company said. 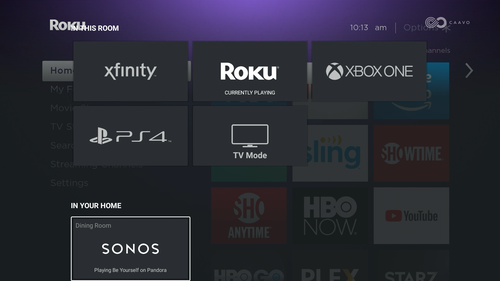 Caavo says its integration with Sonus marks the start of a broader plan to stitch its TV-based platform to various home IoT devices.

On the device side, Caavo has completed an integration partnership with Sonus to enable users to pair the Control Center with the Sonus system to navigate, manage and play back music on the TV using the Caavo remote. Additionally, a tighter integration with TiVo (for its retail boxes and those distributed by TiVo's pay-TV partners) now enables the Caavo Control Center to search and query what's been recorded to the DVR, as well as navigate the TV line-up and tune to live TV channels.

Caavo has cut the pricing for the flagship Control Center device to $59.95, alongside a new set of subscription service plan options -- $3.99 per month, $39.99 per year or $129.99 for a lifetime subscription. Caavo is also pitching a $349.99 two-room starter kit with two Control Centers, four HDMI cables and two one-year service plans. 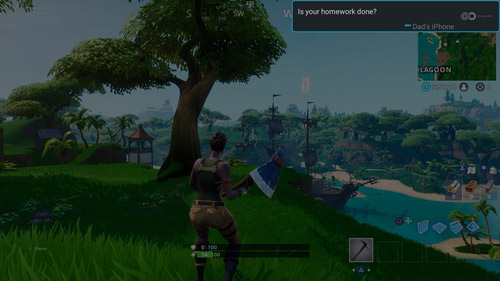 The Control Center's new Family Care feature enables parents to monitor their kids' TV usage in the home, and send messages to the TV screen via a 'pop-up' message (shown here) or an alert that takes over the screen.

Caavo's new software release and pricing changes hit about seven months after the company launched the Control Center, which was initially focused on video and sold for $99.95 alongside a $1.99 per month subscription service.

"Until now, we've called ourselves a universal remote," Ashish Aggarwal, Caavo's co-founder and CTO, said. Caavo's new software release, he adds, takes Caavo in a new, "major direction" that positions the Control Center as a smart home hub that can manage a fragmented IoT device ecosystem in much the same way that it has attempted to help consumers simplify and manage a fragmented environment of set-tops, Blu-ray players, DVRs and video streaming devices. "We are a new category of device," he said.

The grander plan is to help consumers unify the management of a wider range of IoT devices (like garage door openers, home security cameras and smart locks) without requiring the user to launch separate apps.

"We see the TV as a great shared screen in the house," Andrew Einaudi, Caavo founder and CEO, said. "We're just scratching the surface here."

Caavo, a startup founded in 2015 that has raised about $32.5 million, has not announced Control Center sales figures. But the company hopes its reduced pricing on hardware and the addition of more service subscription options will expand sales and adoption of the platform.

And by focusing on the broader market for smart home hubs, Caavo is also opening itself up to other types of companies already focused on that area, including Google, Amazon, Roku and even Facebook. And service providers are also digging into that sector -- Comcast, for example, has Xfinity Home and its xFi home networking platform, and Charter Communications is developing a smart home and security offering.