Quibi launched April 6, offering two tiers of service: an ad-supported version for $4.99 per month and an ad-free tier for $7.99 per month. Heading into the launch, Quibi primed the pump with a 90-day free trial and a partnership with T-Mobile that gives some of its mobile customers a free year of the streaming service. 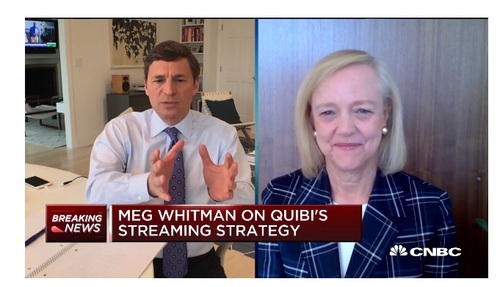 Though Quibi is tailored for mobile phones and people who are on-the-go, stay-at-home orders linked to the COVID-19 crisis "didn't hurt us at all," Whitman said. The launch "exceeded our plans and our expectations," she added, calling last week's debut "one of the most successful launches of a completely new brand and a completely new app."

According to AppFigures, a service that monitors and analyzes app activity, Quibi is presently No. 48 among free downloads for the iPhone and No. 8 on Google Play. (Zoom Cloud Meetings has the top spot on both charts.)

Though it's not an apples-to-apples comparison given that it involves a well-established consumer brand and a long-form streaming service, Disney+ surpassed 10 million subs on its first day last November, aided by several weeks of pre-launch sign-ups, and just crossed the 50 million mark worldwide. Two more new general entertainment streaming services  NBCU's Peacock and WarnerMedia's HBO Max  are inching toward their respective commercial debuts.

Whitman said Quibi saw solid viewing patterns from 7:00 a.m. to 7:00 p.m. in its first week, as consumer "in-between moments" shifted to the home as people, for example, took breaks from work or the kiddos. Some 80% of Quibi users who start a new show watch the first episode in its entirety (under Quibi's short-form model, individual episodes are usually between seven to ten minutes in length), Whitman noted.

She says it's too early to predict how many Quibi customers will stay with the service after their 90-day trials expire, but believes the lengthy term of the trials was the right call.

"We decided when COVID hit, we had to make a whole host of changes around our launch," she said. "We thought that was the right thing to do during this very unusual time."

Quibi is also moving to rectify a complaint that some users and reviewers had early on – that the service is only viewable on smartphones and does not currently support viewing on TV screens.

"We thought about [supporting TVs] upfront, but what we really wanted was to get it right for mobile," Whitman said. Quibi always had plans to allow users to cast content from the smartphone to the TV, but the company's engineering team is now accelerating the roadmap for that capability, she added.

Whitman also believes Quibi is in good shape content-wise even as Hollywood remains shut-down during the pandemic. Quibi, she said, has enough movies, TV series and other scripted and reality show fare in the can to get it through until November. Meanwhile, news content and other daily content continues to be produced despite the challenges posed by COVID-19, she said.

In fact, Quibi debuted seven new shows today, including "The Stranger," a horror movie with a ride-sharing spin. Check out the trailer below:

Quibi is also hopeful that its positioning as a mobile-focused service will be a differentiator even if consumers tighten their belts and trim down the number of streaming services they are willing to pay for.

"It's impossible to predict, but I think the fact that this is mobile-only, very personalized and relatively inexpensivewill [put] us in good stead, but there's going to be some tough roads ahead, I'm sure," Whitman said. "I don't think people make a choice between a music service and an OTT movie service. Both fill a portion of their life, and I think we'll be a third one in that group."